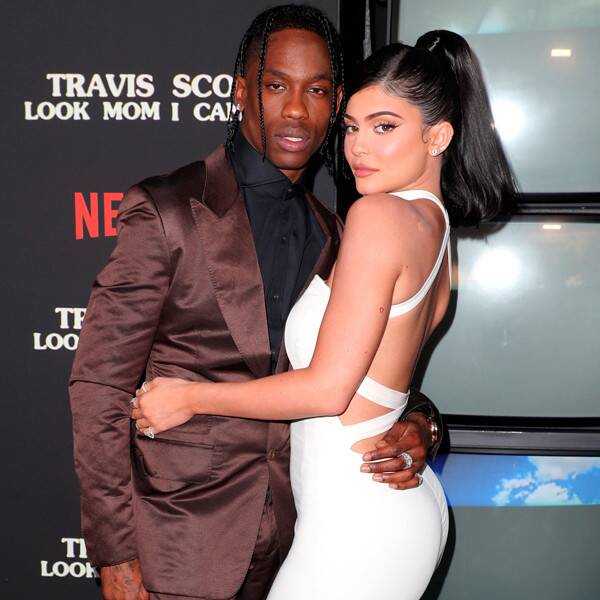 For Travis Scott and Kylie Jenner, it was a night to celebrate.

After the premiere of the Grammy-nominated rapper’s Netflix documentary, Travis Scott: Look Mom I Can Fly, in Santa Monica on Tuesday night, the couple continued the party at an Astroworld-themed soirée. But, first, an outfit change! Stormi Webster‘s famous mama switched out of the curve-hugging white midi dress she sported to the premiere and into a strapless blue denim dress with shades for the after-party.

The couple showed up to the gathering at 1212 Santa Monica with friends around 10:15 p.m., where Scott’s music was playing on repeat and giant clouds were hanging as decor, a source described. Joined by friends, the group could snack on passed appetizers featuring filet mignon, grilled cheese, risotto balls and poke.

While it was a group event, the couple turned it into a bit of a date night as the two stayed in a corner for most of the night and were spotted kissing. “They look really cute and in love,” the source described. “Kylie seemed really happy when she was with him and was smiling at him several times while holding him.”

The pair also got to see friends, including guests Luka Sabbat and Kylie’s gal pal Stassie Karanikolaou, who stayed by the makeup mogul’s side the entire time, the source said. At one point, the ladies danced to Scott’s “No Bystanders.” Stassie also gave Kylie’s assistant help taking videos and photos and the trio hung out by the bar.

The night was not complete without some celebratory shots for the group. According to the source, Scott took several shots of Don Julio 1942 tequila with some guests. According to her Instagram Story, Jenner joined in on the fun and toasted to the debut of the film at midnight.

Travis Scott: Look Mom I Can Fly is streaming now on Netflix.