Inside The Photography Book Honoring The American Transmasculine Community 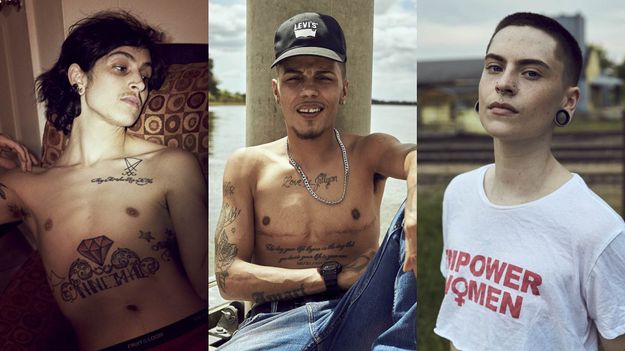 With a camera as their singular companion, they traveled to Cairo, Mongolia, and beyond. Upon realizing their lens could help them find the power in their own complex identity, the Australian-born creative moved to New York and began working for various brands as a fashion photographer.

Three years ago, Zaman decided to dig a little deeper and investigate something highly personal to them: gender expression and the experience of being trans or non-binary. “There was shared commonality in a lot of the stories that I would hear about trans people growing up, and there was also a lack of transmasculine representation in media,” they say now.

In 2016, they began connecting with people on Instagram and saving up money so they could travel and document the stories of transmasculine individuals from across the United States. The self-funded project — which brought Zaman to 29 differents cities including Atlanta, Chicago, Hollywood, and Seattle — is now being published as a photography book, titled American Boys, and will release on April 2, 2019.

It wasn’t initially their intention to spend four years of their life creating the book. However, they explain, “As I met and photographed more people, it really became apparent to me how important what I was doing in celebrating and validating these individuals.” Through the process of orchestrating these shoots, they also connected with the individual and important stories within each person they photographed; before they knew it, the project, which now has over 13,000 followers on Instagram, had become something much bigger than they ever anticipated.

The photos show trans men ages 18 to 35 at various stages of their transition, existing in various spaces including their homes and public places. Zaman aimed to showcase the diverse spectrum of transmasculine experiences, and enlisted each subject to pen a personal reflection on their experience in being trans, which ultimately puts humanity and tenderness front and center.  It was also important to Zaman to highlight and support people who didn’t necessarily live in cities like New York or Los Angeles, or other cities considered “queer hubs.”

In the introductory pages of the book, Zaman explores the ways in which the Internet and social media have helped spread awareness about identities beyond the binaries, creating safe spaces for young people to share their identity stories and transitions as they unfold. For this reason, Zaman purposely published the portraits alongside each subject’s Instagram handle. The book also includes a map of Zaman’s journey, as well as a historical timeline of notable LGBTQ+ events, like the first time the word “homosexuality” was used in The New York Times in 1926, and the Stonewall Riots of 1969.

As for the photos, Zaman conducted the shoots mainly in the summertime as it has “the best light and energy.” Throughout the process, they also found that it was important to honor and represent the subjects authentically. So they made a conscious effort to get to know each person before photographing them by first having an honest conversation in which both photographer and subject could share their experiences as trans individuals. “I recorded every single conversation and spent hours sitting and hanging out with them, asking them about their lives, journey, relationships and, friends,” they explain to MTV News over the phone.

READ  Queen’s Brian May ‘Give Boris Johnson the benefit of the doubt, election was WAKE UP call’

The images are a visual testament to the intimacy Soraya was able to achieve through connecting with their subjects so deeply. For example, Justin, a student in Richmond, Virginia, was shot a week after having top surgery, which made it hard for him to move around physically. “Soraya is a great photographer, they made me feel at ease and very comfortable,” he tells MTV News. For Justin, the raw pictures of his chest healing are still very powerful. “It shows the physical demand it took for me to become myself.”

When it came to choosing a location for each shoot, Zaman gave each subject the opportunity to pick a few places that felt personal to them, resulting in images shot in their bedrooms, local restaurants, and parks. Steven, an 18-year-old living in South Dakota who was photographed in nature, says the project helped him realize he was capable of things he had never imagined, helping him feel more free to be himself.

“Now, when I look at myself in the mirror, I feel as if I’ve loved myself the most I ever have,” Steven says.

Elias, who is captured both in his bedroom and at a restaurant, says that participating made him feel beautiful. “The images are important for transmasc folks who don’t always get to be around people like them,” he adds.

Thomas, a 27-year-old artist and musician from Athens, Georgia, says that while he is no stranger to the camera, the shoot was raw and made him feel as if he was part of something bigger than himself, something he found to be especially profound since he never saw positive representations of trans people as a young person. “I overcame my anxieties fueled by fear of self-expression, and did it so others could maybe relate and if they can’t then maybe they can at least see, if not understand, a different perspective,” the artist states over email.

One commonality Zaman discovered along the journey of this project was that many of the subjects had initially come out as gay, lesbian, or bi before transitioning. “Ultimately this didn’t always feel right because this doesn’t inform one’s gender identity,” they note. Accordingly, they say that many of the subjects had to have a second “coming out” as trans, which could be due to the ways in which society tends to ignore the diversity of gender identities while also misunderstanding the distinctions between sexuality and gender.

When Zaman set out to make this body of work, they didn’t realize how much the practice would inform their own understanding of gender and the power inherent in it. “I definitely developed a greater appreciation for the bravery and strength it takes to truly embrace who you are, especially when that identity exists outside of society’s cis heteronormative landscape,” they say.

To them, the project serves as a challenge to the photography industry, and the whole of society, to embrace the expansiveness of gender outside of the established norm. It’s also a work of affirmation: “I feel like a lot of people will be able to relate and learn from the book and that it’s a positive contribution to [seeing] gender outside of a binary.”