MAKING my way through the mass of twisted trees, a deep voice bellows from the dark; “Hagrid… is that you?”

A large hairy leg emerges from beneath the shrubbery, slowly stretching toward me before several beady eyes reveal themselves.

The creature’s name is Aragog – and I’ve wandered straight into his woodland lair, which now sits in the gardens of Arley Hall, just south of Manchester.

The new Forbidden Forest Experience is the latest venture for Warner Brothers and the Harry Potter franchise.

Unlike the Studio Tours near London, which takes fans behind the magic of the movies, this immersive light trail lets them actually live it.

As the giant spider stares from the bushes, I look up and notice several of his beastly children are dangling from webs in the tall trees above.

Suddenly they all plummet toward the ground, stopping just above my head as the forest erupts with screams from thrilled visitors.

Aragog is just one of many creatures lurking in the forest trail.

During the self-guided tour we come face to face with cute pink pygmy puffs, talking centaurs and even a white unicorn.

To capture the atmosphere of the fictional forbidden forest, that in the books, is “strictly off limits” to Hogwarts’ wizards and witches, the tour only operates at night.

You won’t be creeping around entirely in the dark though.

Fairy lights line a rural path leading to the wooded entrance where you can warm yourself with spicy mulled wine and hot chocolate ahead of the hour-long trail.

Gathered round the forest opening we’re thrown straight into the magic as our host lights the way with her deluminator (the first of many Harry Potter-themed gadgets we see), then we’re left to wind our way through the darkness alone.

Jolly music echoes from the forest as fluorescent lights bounce between the tree trunks, then, as we venture deeper, the lights drop and music takes an eerie turn.

Large wooden signs warn us of the magical creatures lurking in the bushes, but this does not deter the young children in front, who scurry ahead excitedly.

After a tense wand battle and some spell practise, we spot a miniature village packed with food stalls glowing at the end of the trail.

Before we enter though, it’s time for the grand finale. In a spectacular display of lights and smoke we watch from the bank of a lake as the silhouette of Harry Potter casts his patronus charm over the water, rescuing us from the deathly dementors.

The Potter-themed fun isn’t quite over yet though. In the village there’s wooden lodges selling hearty grub from roast dinners to fish and chips as well as pumpkin cocktails and humongous doughnuts dripping in chocolate.

Huddled round a roaring campfire, we toast giant marshmallows and get a proper chance to admire the scenic grounds.

Even without the wizardry, the place feels pretty magical.

The Forbidden Forest Experience in Arley Hall & Gardens is open now until early next year. Off-peak tickets cost from £19 and standard are from £24.

Anyone really wanting to live like a wizard can head to Ireland and spend a night in Spellcast Cottage, which has been decorated like the Gryffindor common room. 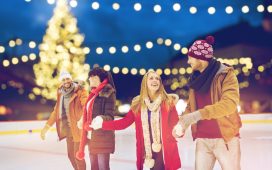