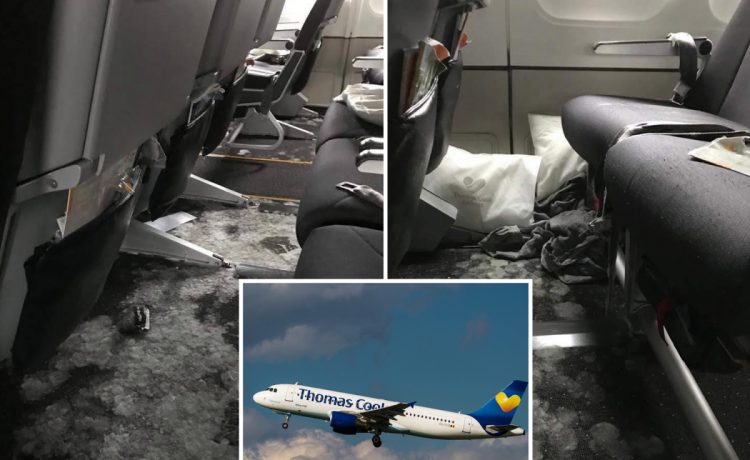 THREE jets were so mouldy and decayed after Thomas Cook’s demise they are being broken up for parts.

The planes were abandoned in a corner of Manchester Airport after the airline went bust and plans to sell or lease the ageing aircraft had to be shelved.

Amazing photos leaked to The Sun reveal the Airbus A330s were untouched for nearly 18 months since making their last flights.

The decay was so extreme inside one jet – registration G-MDBD – that it needed specialist cleaning and mould removal.

Despite the efforts of industrial cleaners, the planes were deemed “unsellable” – and broken up with their few usable parts sold off.

An aviation insider told The Sun yesterday: “It’s so sad some Thomas Cook planes were abandoned and left to literally rot, the cabins had not been touched since the last passengers disembarked.

“The level of bacteria on the seatbelts was disgusting and the mould and decay was so bad the three planes had little chance of flying again.

“It’s terrible to see once thriving aircraft, which took thousands of families away for holidays, just forgotten about and left to fall apart.”

The snaps were taken when aviation officials entered one doomed jet – reg G-MDBD – to power it up and see if it could be moved.

They were stunned to see the interior had not been cleaned or aired out since the 178-year-old British travel firm was liquidated in September 2019.

Three of the remaining Thomas Cook fleet were deep-cleaned in January in the hope buyers could be found for them. But no takers were forthcoming.

One aircraft lover said: “It’s a horrible end for them. There is a website selling off parts – windows and panels mostly.”

The UK’s biggest repatriation since World War Two was launched following the collapse of Thomas Cook.

Around 150,000 stranded Brits were flown home from 53 destinations in 17 countries in the rescue mission costing £100 million.

The vast majority of the airline’s 34 jets had been leased, and so were returned to their owners.

But three of the A330s – the oldest in their fleet – were owned by Thomas Cook.

The trio became the property of the airline’s creditors. But no buyer came forward and they were “forgotten” until it was too late, insiders said.

Easter lockdown travel rules: Can I go away over the bank holiday weekend?

The planes were not leased to make money for creditors – and in fact cost money in storage charges.

Meanwhile Thomas Cook’s dedicated hangar at Manchester Airport has been stripped of its signage and sold off to a maintenance firm.

The airport, Official Receiver and Alix Partners, who supported the insolvency of Thomas Cook’s airline business, were approached for comment.