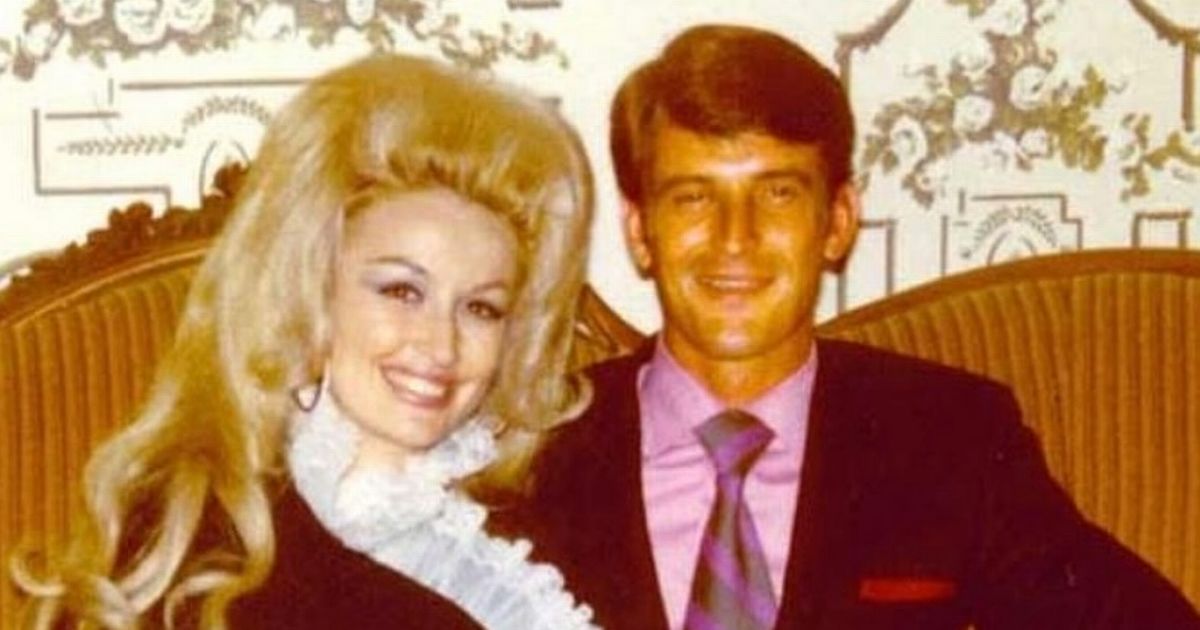 Rumours about Dolly Parton have been doing the rounds for years – her husband doesn’t exist; her marriage is a sham; she’s actually gay; she’s covered in tattoos and has had a slew of affairs.

But Dolly’s rarely-seen husband Carl Dean is very much the real deal, having hidden quietly in the background of Dolly’s glitzy life since their first meeting outside Nashville’s Wishy-Washy laundromat when she was just 18.

Carl, then 21, caught her attention by joking that she was going to get sunburn in her revealing outfit.

And he knew from the second they met that Dolly, 73, was The One.

“My first thought was I’m going to marry that girl,” Carl once said. “My second was, ‘Lord she’s good lookin.’ And that was the day my life began.”

She signed with Monument Records soon after and married Carl in a small ceremony in Ringgold, Georgia in 1966, with only her mother as a witness.

But fame wasn’t something Carl wanted or enjoyed and he instead chose to live a quiet life on their sprawling farm, running his paving firm until his recent retirment.

“Listen, he’s a homebody and doesn’t like to go out in public,” Dolly previously told The Mirror.

“We have a farm and he’s more than happy keeping the fields mowed, the barns painted and working away on his farm equipment.”

In fact, the singer – whose 1973 song Jolene was inspired by a woman trying to steal Carl – describes her husband as a “loner”.

“He doesn’t particularly care about being around anybody but me. He’s just always asked me to leave him out of all this. He does not like all the hullabaloo,” she explained.

Over the years she’s been accused of having affairs with everyone from Sylvester Stallone, Burt Reynolds and her lifelong friend and personal assistant Judy Ogle.

The speculation only intensified when Dolly once innocently admitted that they had shared the same bed.

“But I have never in my life had a ­relationship with a woman or had a desire to be with a woman,” she previously said.

Weighing in on why she believes the rumours started, Dolly continued: “We both went through high school together. She went into the military and when she came out of the army she never married. She dates and she has had several boyfriends. The fact that they never see my husband, they make it out that we are in a relationship.

“It doesn’t upset me but it upsets and embarrasses Judy and her family. I say to her which would you prefer – being called an old maid or a lesbian? She says lesbian every time!”

As for the affair rumours with some of Hollywood’s biggest leading men, Dolly admits she’s “never met a man I didn’t like”, and explained that she has an “open” relationship with Carl – but not in a physical sense.

She explained: “He’s not jealous and I’m not jealous of him. He knows I flirt. He flirts too. Yes, it’s an open relationship, but not sexually and I would kill him if I thought he was doing that. He would shoot me too. At the end of the day we love each other madly.”

To keep the love alive, she makes sure her off-duty clothes are still “cute and sexy” and says Carl is a hopeless romantic who likes to shower her with gifts.

From picking her buttercups to writing her poems, the couple recently marked their 50th wedding anniversary by renewing their vows.

As for the key to their longevity, Dolly says they love to make each other laugh.

“The humour has kept us together over the years,” she said.

“Carl has a crazy, warped sense of humour. He is extremely funny and I suppose I am pretty funny too.

“Even if we get p**sed off with each other, we have never said anything that we would regret if one of us died. We usually laugh our way out of it.”

Another long-standing rumour about Dolly is that she’s secretly covered in tattoos.

Indeed, she always wears long sleeves which has only served to fuel the gossip.

“It was 9.30 in the evening, which meant that the restaurant was empty, because that’s what happens in LA, everyone goes home, no one stays out drinking late,” Jennifer once recalled.

“And so the restaurant was empty and she just opened her jacket and showed us, can I say, the most beautiful tattoos.”

And earlier this year Dolly finally confirmed that she does indeed have a secret collection of pretty pastel-coloured tattoos which she uses to hide her scars.

She told CNN: “If I have to get a scar for any reason, I never can kind of get rid of that purple look. So I thought, ‘Well, I’m going to kind of decorate these with some flowers or little butterflies or whatever.'”