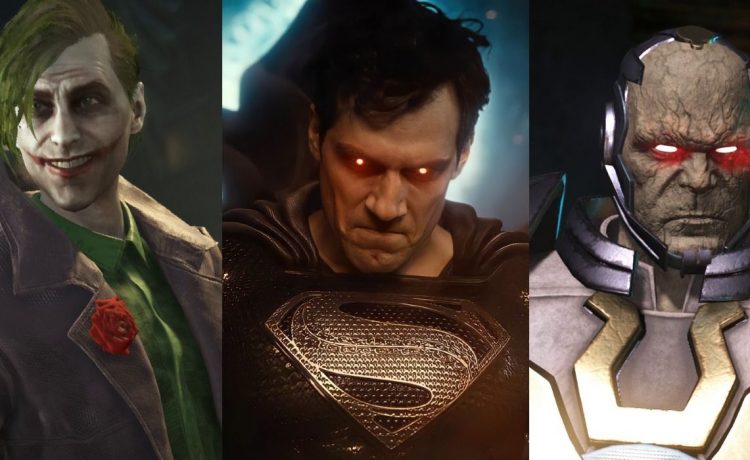 After four years of fan campaigning, Zack Snyder’s Justice League was finally released. It tells a whole different version of the Justice League story, even bringing in the likes of Darkseid and a return to the apocalyptic “Knightmare” future. The leaked Justice League 2 and 3 storyboards reveal how the rest of the tale was planned.

What fans might not know is that there are quite a few similarities between Zack Snyder’s plans and the Injustice series of videogames. The two Injustice games are beat-em-ups made by Mortal Kombat developer NetherRealm set in a nightmarish DC universe controlled by Superman. Interestingly, the games actually did influence the Knightmare Future in numerous vital ways.

10 Superman The Ruler Of Earth

The biggest and most obvious similarity between Injustice and the Knightmare Future is that both imagine a world where Superman is corrupted by a great tragedy and turns evil. In both cases, the audience sees the tragedy. The story then cuts to years later, to where Superman has established a new world order with himself in command.

While the Justice League 2 version sees Superman enthralled by Darkseid, both are basically the same. Even the black stormtroopers that Superman commands are identical to the ones in the Injustice Regime.

Possibly the coolest addition to Zack Snyder’s Justice League was the Knightmare epilogue at the end, where fans finally got a scene featuring both the DCEU Batman (Ben Affleck) and Joker (Jared Leto). Despite the deaths of many heroes and villains, including Wonder Woman and Harley Quinn, the Joker has managed to survive.

However, it’s not quite how things went down in Injustice. In that version, the Joker was responsible for killing Lois Lane, which results in Superman killing him for it. Nevertheless, the Joker always endures.

No matter what happens in the DC universe or how close the friendship between Batman and Superman is, if one of them turns bad then the other always rises up to stop them. In both Injustice and Zack Snyder’s Justice League, when Superman turns evil, it is revealed that Batman will lead the Insurgency against the Man of Steel’s new Regime.

In both game and movie, this goes very poorly, with Batman left as one of the last survivors of Superman’s brutal purges. Furthermore, in both stories, Batman blames himself for the evil turn his former friend has taken.

While Superman is the clear and present threat that Batman and the resistance are fighting against, in both Zack Snyder’s Justice League and Injustice 2, there is a powerful cosmic evil that is worse than even a tyrant Superman.

In Justice League and its proposed sequels, it’s Darkseid. However, in Injustice 2, it’s Brainiac. Both are world-conquerors who usually prefer destruction and can take over minds when the need arises – either through the Anti-Life Equation or the assistance of Gorilla Grodd. Eventually, all heroes rally to fight the ancient invader from the depths of space.

6 The Hunt For The Last Kryptonite

Injustice: Gods Among Us and the Knightmare sequence from Batman V Superman share one important item that the heroes are after: the last piece of Kryptonite on Earth.

In Injustice, the Kryptonite is sealed in the Batcave but requires several Justice League members to open it, forcing Batman to bring over heroes from another Earth. They get it and fashion it into a weapon, but it ultimately fails to stop Superman. The Knightmare sequence likewise features a search for Kryptonite that results in failure, with the only difference being that Batman never gets his hands on the rock in the first place.

5 The Flash Is The Solution

At the end of Zack Snyder’s Justice League, despite the arrival of Superman and the death of Steppenwolf, the team lose. It’s only thanks to Barry Allen that the Justice League saves the day. Likewise, the Knightmare epilogue and the Justice League 2 storyboards make it clear that Flash and the Cosmic Treadmill are the only way the heroes can stop Darkseid and the evil Superman.

This mirrors what happens in Injustice: Gods Among Us, where Flash uses the Treadmill to hop dimensions is the only way that Superman can be stopped.

In both Injustice and the DCEU Knightmare future, there is an Insurgency against Superman’s Regime led by Batman. Other than the Dark Knight himself, its members vary. In Injustice, the members contain Harley Quinn whereas Zack Snyder’s Justice League has The Joker. However, one major constant between the two is Slade Wilson (a.k.a. Deathstroke).

He even looks similar, as Slade forgoes his classic mask in favor of his grizzled face. In both universes, Slade plays an important role in the Resistance, and in both cases, his ultimate fate is left a mystery for fans.

3 Lois Lane Is The Key

The first appearance of the Knightmare Future occurred in Bruce Wayne’s premonition in Batman V Superman, where it was caused by the arrival of a time-traveling Barry Allen. Flash has just one message for Batman: “Lois Lane, she’s the key.” In Zack Snyder’s Justice League, Cyborg also sees a vision of Superman cradling Lois’s burnt remains as Darkseid watches on.

As the Justice League 2 storyboards make clear, it’s the death of Lois that corrupts Superman, which is exactly what happens in Injustice: Gods Among Us too. Preventing her death is the only way the Justice League can beat Darkseid.

2 The Portal To Darkseid

The biggest moment in Zack Snyder’s Justice League is the moment in the final battle where a Boom Tube portal opens and the Justice League comes face-to-face with Darkseid for the first time. The portal doesn’t stay open for long after the Mother Boxes are destroyed so the team don’t have a chance to face Darkseid in his throne room on Apokolips.

This scene is very reminiscent of a scene transition in the Metropolis stage of Injustice: Gods Among Us, where the player can send their opponent through a similar portal to Darkseid – who doesn’t take kindly to the intrusion.

Apart from a couple of brief cameos in Zack Snyder’s Justice League, the Green Lantern Corps has not appeared in the DCEU so far, even during the multiple times the Earth was in peril from the likes of Zod and Steppenwolf.

In the plans for the Justice League sequels, Green Lantern wasn’t actually meant to appear until Justice League 3 – where they discover they have arrived too late to help the Earth, with the Corps itself decimated because of the Guardians’ unwillingness to get involved.

The same thing happens in the Injustice comics, where the Guardians refuse to move against Superman until it becomes much too late – and the Corps loses many members as a result.

NEXT: Zack Snyder’s Justice League: 10 Videogames To Play While You Wait For The Snyder Cut

READ  Why video games might be good for you by Jasmine Hadouka-Taylor, Reigate College. - Surrey Comet
Share on FacebookShare on TwitterShare on PinterestShare on Reddit
newsgrooveApril 4, 2021