The Crawford family ran a marathon together but now the parents, Ben and Kami, have been slammed as it emerged they let their six-year-old compete despite his young age

Two parents have been slammed for making their six-year-old child run an entire marathon – despite the toddler ‘struggling physically’.

Ben and Kami Crawford are parents to six children and together they all ran the Flying Pig Marathon, crossing the line individually then posing for a family photo after 26.2 gruelling miles.

Their youngest child, Rainier, was the slowest – completing the course in eight and a half hours, as he would “take a break and sit every three minutes” and was “crying and… moving slow”.

The Crawford family, from Kentucky, USA, documented the whole race on Youtube and have come under fire for making the youngster take part, when the minimum entry age is 18.

The Crawford family have been running marathons together for some time
(

What do you think about marathons? Let us know in the comments…

Olympian Kara Goucher spoke out against the family, and race organisers who were aware of Rainier taking part, saying that six is too young for a marathon.

She said: “I don’t know who needs to hear this but a six-year-old cannot fathom what a marathon will do to them physically.

“A six-year-old does not understand what embracing misery is. A six-year-old who is ‘struggling physically’ does not realise they have the right to stop and should.

“I’m not questioning motivation or saying it is bad parenting. But as an Olympic athlete, I promise you this is not good for the child.

“Children are children. Let them run around, but as the parent you need to protect their growing bodies and their young minds.”

Kara’s comments came after Rainier’s dad posted about the youngster’s struggles on the course.

He wrote: “On the marathon course, Rainier knew they usually hand out Pringles around mile 20. He was struggling physically and wanted to take a break and sit every three minutes.

“After seven hours, we finally got to mile 20 and only to find an abandoned table and empty boxes. He was crying and we were moving slow so I told him I’d buy him two sleeves if he kept moving.

The Crawford family ran the race together
(

“I had to promise him another sleeve to get him in the family pic at the finish line. Today I paid him off.”

After receiving backlash online, the family released a statement on their Facebook page.

They said: “We have never forced any of our children to run a marathon and we cannot even imagine that as feasible practically or emotionally.

“We have given all of our kids the option for every race. Last year two kids ran it without us. In nine years we have been awarded a total of 53 medals – mostly to the kids. This year after begging to join us we allowed our 6-year-old to train and attempt it.

“Both parents gave him a 50/50 chance of completing it and were ready to pull the plug at any moment if he requested it or if we viewed his safety at risk.

Kara Goucher has spoken out against the parents
(

“We asked him numerous times if he wanted to stop and he was very clear that his preference was to continue. We did not see any sign of heat exhaustion or dehydration and honoured his request to keep on going.

“Yes there were tears. He had a fall and every single member of our family has cried during marathons.

“These experiences were very limited compared to what has been reported and despite the incredible physical and emotional difficulty of running a marathon the amount of his crying is comparable to what we would have experienced had we stayed home on a Sunday morning.

“Many people are inaccurately reporting that people saw him for the ‘entire’ or ‘majority’ of the race crying and that there are numerous witnesses.

“With our finishing time this is impossible as we finished the last five miles predominately alone and most people’s experience with us was in a one time passing of 30 seconds.

“Those making these confident and absolute assertions do not have any evidence. We have hours of video footage and images that will be released that depict his emotional state very clearly.”

The full statement is available here.

Do you have a story to sell? Get in touch with us at yourmirror@mirror.co.uk 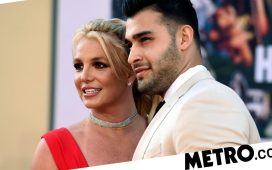