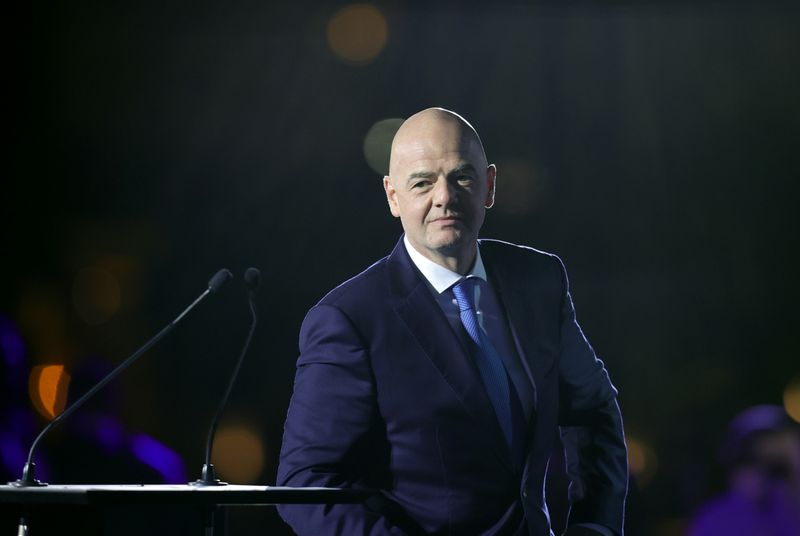 (Reuters) – FIFA President Gianni Infantino on Monday shot down reports that he had instructed female referees not to greet a Qatari delegate during the Club World Cup medal ceremony last week and insisted he remained a strong advocate for women’s rights.

After the game in which Bayern Munich beat Mexican side Tigres UANL 1-0, Sheikh Joaan bin Hamad Al-Thani was seen fist-bumping male officials as they walked up to the podium but he appeared to ignore female referees Edina Alves Batista and Neuza Back.

Reports suggested Infantino had instructed the female officials not to greet the Sheikh, who is also the president of Qatar’s Olympic Committee, although Infantino said he had simply congratulated them on a job well done.

“Given the lies that have been spread online in relation to what I said to the female officials during the Club World Cup final medals ceremony, I would like to issue a clarification,” the head of the global soccer body said in a statement https://www.fifa.com/clubworldcup/news/fifa-president-statement.

“I used the opportunity to congratulate them for the great job that they performed throughout the competition. This was a landmark for FIFA. The first time that female officials were appointed to, and officiated at a men’s senior FIFA competition.

“As everyone knows, I am a strong advocate of women’s rights and equal treatment of every human being. Regardless of gender, race, ethnicity, sexual orientation, religion or physical ability.”

Infantino had said before the game that by appointing female officials, FIFA wanted to “break down barriers” and “send out an important message to the world.”

“Those who have been spreading false rumours should be ashamed of their actions,” Infantino added.

Benjamin Pavard’s goal in the 59th minute following a VAR review handed Bayern their sixth trophy in less than nine months, making them the first team to match Barcelona’s sextuple from 2009.