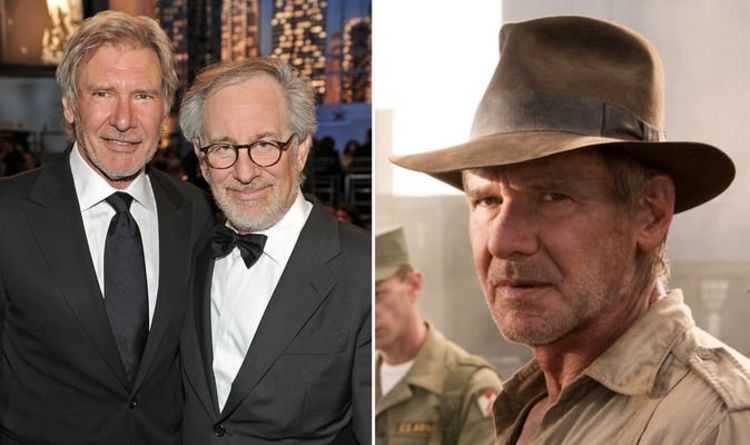 Indiana Jones 5 is currently filming across the UK and with Harrison Ford now aged 79, some fans have been wondering when the blockbuster takes place. After all, set photos have shown the Hollywood star with dots on his face suggesting he’ll be de-aged. While actors dressed in Nazi uniform have been spotted alongside World War II-era vehicles with swastika flags.

Looking back, the original Indiana Jones trilogy was filmed in the 1980s, but set in the mid-to-late 1930s.

Then when Ford returned for 2008’s Indiana Jones and the Kingdom of the Crystal Skull, the action took place in 1957.

Luckily, Steven Spielberg, who directed the first four movies and is producing the fifth, has previously confirmed the new film’s setting.

Speaking with the EMPIRE podcast after collecting his Legend Award at the magazine’s 2018 ceremony, Spielberg confirmed: “It’ll be in the sixties.”

Of course, since then he stepped down as director for Logan’s James Mangold to take over and the latter has had a go at the script himself.

Nevertheless, considering Ford’s age we think the action will take place in the late 1960s, specifically 1969.

So whatever is happening in the late 1960s setting of Indiana Jones 5 will probably have a connection to the archaeologist’s adventures during World War II in the 1940s.

The main focus of the show was on Flanery, who depicted Indy just before, during and after the First World War.

While Carrier played the character as a child and Hall would bookend each episode as a 93-year-old Indy living in 1993 New York.

Interestingly, Hall’s old Indy has an eyepatch, so maybe Ford’s will lose his eye in Indiana Jones 5 to keep the continuity of the franchise’s canon?

Meanwhile, Ford reprised the role as Indy aged 50, for one episode called The Mystery of the Blues. He stars in the fifth movie alongside Phoebe Waller-Bridge, Mads Mikkelsen and Toby Jones.

Additionally, Marion star Karen Allen and Sallah actor John Rhys-Davies have recently given interviews for the 40th anniversary of Raiders of the Lost Ark and both seemed pretty coy about their involvement in the new film.