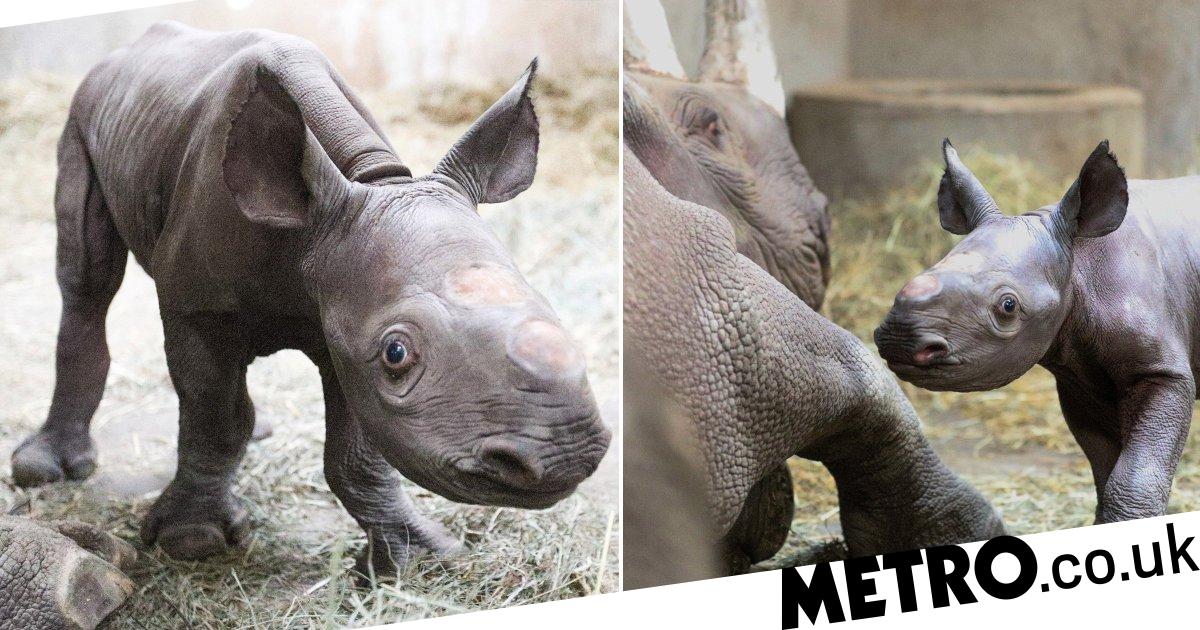 A zoo that welcomed the rare birth of a black rhino last week has shared adorable footage of the calf’s first ‘sparring match’ with his mum.

There are just 5,000 of the critically endangered animals left in the wild and around 50 in accredited zoos worldwide, so the birth on Christmas Eve was cause for celebration.

Zookeepers were delighted when they caught the newborn playfully rubbing his nose against his mother Doppsee’s horn on CCTV just a few days later.

Potter Park Zoo in the US state of Michigan shared a clip of the moment online and said: ‘Sparring with horns is a natural rhino behaviour and this little guy’s first training session with mum is downright adorable.’

The calf, which has not yet been named, was the first black rhino to be born at the zoo in its 100-year history.

Pat Fountain, an animal care supervisor at Potter Park, said the birth was one of the zoo’s ‘crowning achievements’ because the species is ‘statistically and historically very hard to breed and be successful’.

Getting Doppsee to breed with the calf’s father, Phineus, when he visited in 2017 was a ‘milestone’, Mr Fountain added.

The calf managed to stand up about an hour after birth and is said to be bonding well with his mum.

The zoo’s vet, Dr Ronan Eustace, said: ‘As this is Doppsee’s first pregnancy, the animal care and veterinary staff will continue to monitor Doppsee and her calf closely in the next few weeks.

‘But so far, the rhino calf appears healthy and we have observed frequent nursing shortly after the birth, which is encouraging.’

Footage of Doppsee’s delivery and the calf’s first steps, which came around an hour and a half after he was born, were also posted online by zoo staff.

The female rhino lived in the wild for all but the last three years of her life when she was taken into a sanctuary in Tanzania after being attacked by hyenas.

Officials said she lived longer than any rhino in the world and most likely died of natural causes on December 27.

READ  Pick of the Litter review – heartwarming dogumentary
Share on FacebookShare on TwitterShare on PinterestShare on Reddit
newsgrooveDecember 30, 2019