In video games, 2019 was the year of Death Stranding – The Japan Times 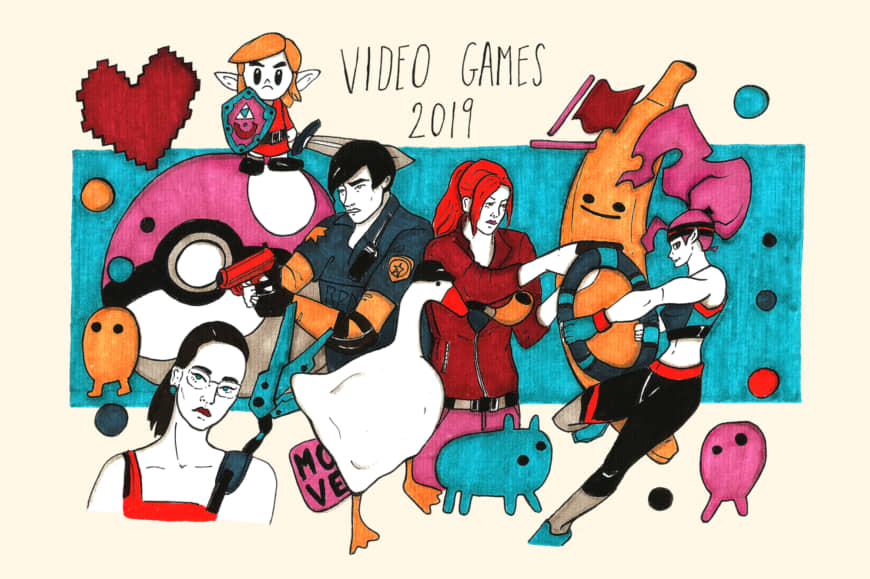 The final year of the 2010s in gaming served up Hideo Kojima unplugged.

Given a blank canvas, free from Konami and bankrolled by Sony, gaming’s auteur extraordinaire was free to be his most, well, “Kojima-esque.” The result was Death Stranding, one of the most talked-about games of 2019.

There was no shortage of things keeping gamers busy this year, from evading a massive and persistent murderous zombie to motorcycle chases through cities bathed in neon purple and set to a pulsating pop soundtrack. There were Pokemon, petulant geese and even a ghost-sensing fetus in a year that had something for almost everyone.

Even among all that, though, few games set the community ablaze quite like Death Stranding.

Kojima’s PlayStation 4 creation, which was released in November, was both loved and loathed by many, with neutral opinions seemingly few and far between.

The key theme of the game was the importance of connections and working together as one for the benefit of society. As Sam Porter Bridges, a very on-the-nose named porter for the Bridges company (portrayed by actor Norman Reedus, best known as Daryl Dixon in TV’s “The Walking Dead”), you set off on a mission to reconnect an America torn asunder by a catastrophic event. This was mostly achieved by delivering cargo and connecting various outposts to the United Cities of America’s communication network.

“If you want to boil it all the way down, the biggest story in video-gaming right now is a release that features a mailman who hikes across America to reboot the internet,” Vulture’s Brian Feldman said in his review.

Indeed, this is a game in which you can go for long stretches doing nothing other than walking, and it wasn’t everyone’s cup of tea.

Death Stranding was also awash in Hollywood stars — as well as Reedus, there were Mads Mikkelsen and Lindsay Wagner, to name a few — and not particularly subtle nods at real-world affairs woven into a story that was equal parts interesting and weird. You spend most of the game alone, with the exception of BB (aka Bridge Baby), the fetus you carry around in an orange jar. BB can sense the ghosts you must avoid on your travels and the various sounds he makes can also be heard through the PS4 controller.

Death Stranding wasn’t perfect, but it was a fascinating title and among the year’s more unique and worthwhile experiences.

And there were plenty of those.

Even with the shadow of the next generation looming overhead — new machines from Mircosoft and Sony are due next year — the current generation isn’t just slipping off quietly into the night.

Take the game Sekiro: Shadows Die Twice, which was released in March. It was created by FromSoftware, famous for its Dark Souls series, and is similar to the developer’s other titles. But with additions like the main character’s grappling hook-prosthetic arm and its stealth elements, Sekiro gave fans a slightly new twist on the Dark Souls formula. The game’s blood-spraying violence, the serenity of its Sengoku Period setting and a solid story only added to its appeal.

The game is also as unforgiving in its difficulty as its FromSoftware predecessors.

“Sekiro might be the most difficult game this company has made and it has a reputation for making hard games,” CNET’s Andrew Gebhart opined in April.

Mastering the rhythm of combat is essential — deflects are both the keys to victory and the pathway to the frustrating abyss of death — as the game makes you work relentlessly for every bit of progression.

Sekiro reignited the debate about difficultly and accessibility in video games and what responsibility, if any, lies with developers.

There was little debate about Control, which hit consoles and PCs in August to the delight of critics and gamers alike. Control’s inventive combat options (why use a gun when you can telekinetically throw chunks of walls at people?), shifting environments and story helped put it on many year-end lists.

The Outer Worlds, a first person role-playing game, was also among the best of 2019. The game was full of humor, action, a solid companion system, good writing and a colorful cast of characters. The wealth of dialogue options, and the results of some of your choices, only increased its replay value. It was a game that would’ve felt at home in the Fallout or BioShock series, or as an episode of the anime “Cowboy Bebop,” but has a charm all its own.

The battle royale genre’s grip on gaming remained tight thanks to Apex Legends, released for consoles and PC. Electronic Arts dropped the game on the public with no warning in February, and this high-paced, team-oriented title gave fans something to play other than Fortnite.

Meanwhile, Tetris 99, released for the Nintendo Switch in February, was the unlikely marriage between Tetris and battle royale games no one knew they wanted so badly. It turns out playing Tetris against 98 other people — at the same time — is quite the thrill.

The upward trend of original indie games also continued this year. One of the biggest surprise hits of 2019 was Untitled Goose Game from developer House House.

The game, which debuted on Nintendo Switch in September, puts you in the webbed feet of a goose that sneaks around stealing things, setting traps and generally causing havoc for the residents of a small town. Its charming art style and simplicity added to its popularity.

Deadtoast Entertainment’s action game My Friend Pedro was another example of good, though not very clean, fun. The game is all about gun fights and awards style points for especially flamboyant feats of violence. As for the story, you’re set off on your path by a floating, talking banana.

Meanwhile, Simogo’s Sayonara Wild Hearts turned heartbreak into a party with an engaging, fast-paced, rail-shooter-eqsue trip that played like an homage to the PlayStation 2 cult classic Rez, and was complemented by a catchy soundtrack.

There were also plenty of new additions to existing franchises to keep gamers busy.

Capcom set the tone in January with the release of Resident Evil 2, a remake of the 1998 survival horror hit. With updated mechanics and gameplay, the game was everything fans could have hoped for. It also featured an updated Mr. X, the hulking tyrant whose heavy, deliberate footsteps often provided an ominous soundtrack as he stalked you.

Nintendo was also bitten by the remake bug, bringing Switch owners a refreshing reimagining of the adventure classic The Legend of Zelda: Link’s Awakening.

For fans of role-playing games there was the release (finally) of Kingdom Hearts III for the PlayStation 4 and Fire Emblem: Three Houses for the Nintendo Switch.

Luigi, the younger, taller brother of Nintendo’s Mario, returned for Luigi’s Mansion 3, which had you solving puzzles and battling ghosts in a fun platformer on the Switch. Nintendo’s hybrid system was also home to the latest installment in the popular Pokemon franchise, Pokemon Sword and Pokemon Shield, which were released in November.

November also saw Google step into the gaming ring, with the tech company launching Stadia, its cloud gaming service. Hopefully Google filtered its search results, because Stadia mostly landed with a thud. A poor launch lineup, among other issues, seemed to make a rough first impression with many gaming fans.

As much as was packed into 2019, 2020 might be even busier, with major releases like Cyberpunk 2077 and Final Fantasy VII: Remake, not to mention two new consoles, all set to hit the market with a bang.

Five essential video game releases from 2019 to check out

Death Stranding (PS4)
Hideo Kojima’s epic is half art house film project, half video game. While there are intermittent bouts of combat, gravity is your most persistent enemy as you try to stay balanced while carrying loads of cargo (which can stretch almost comically upward) on your person. The game is driven by its narrative, which disappears for far too long on occasion. Honestly, although Death Stranding is such a weird game it’s hard to make it sound appealing, the sum of its various parts add up to an original and interesting experience that was one of the best releases of the year.

Resident Evil 2 (PS4, Xbox One, PC)
Coming on heels of Resident Evil 7, which brilliantly revitalized the series in 2017, this game already had a lot to live up to even without being a remake of the popular PlayStation title of the same name. Leon S. Kennedy and Claire Redfield’s return to an overrun Raccoon City met expectations, though. The game retains the creepy mix of apprehension and action (and item management) that helped the series write the blueprint for survival horror back in the 1990s.

Sayonara Wild Hearts (PS4, Switch, Apple Arcade)
This indie title is full of both style and substance. The story, about heartbreak, sends you careening through the game’s levels on motorcycles and skateboards (and even by flying), at breakneck speeds. There are even what amount to dance battles from time to time. The game isn’t extremely difficult, but it does present a challenge that keeps you coming back to try to do better.

Sekiro: Shadows Die Twice (PS4, Xbox One, PC)
“The Dark Souls of samurai games.” Now that the requisite mention of Dark Souls is out of the way, Sekiro is an engrossing action game set in Japan’s 16th-century Sengoku Period. The game is tough, to say the least, but it rewards you with solid gameplay and a good story that keeps you interested and provides a sense of accomplishment when you finally beat that boss you’ve been stuck on.
Sekiro was crowned Game of the Year at this year’s Game Awards in Los Angeles on Dec. 12.

The Outer Worlds (PS4, Xbox One, PC)
The Outer Worlds is deeper than it seems at first glance. While you’d have plenty of fun just treating it as a shooter and blasting your way through, its customization options for armor and weapons, and skills for your character and companions really flesh things out. Then there are the dialogue choices, which branch into all manner of sidequests and fun detours depending on what you choose to say and how deep into the story you want to get. Also, check out Parvati, a great character who is easily the game’s best companion.