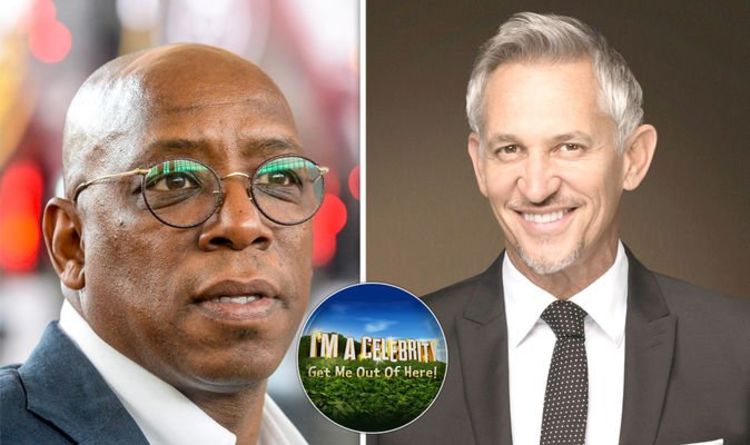 ITV reality series I’m A Celebrity… Get Me Out of Here! will be launching its latest series on November 17. Hosts Ant McPartlin and Declan Donnelly are going to be welcoming a new batch of the stars to the famous Jungle Camp. Among the names of celebrities thought to be participating this year is ex-football player Ian Wright.

Reports started suggesting Wright could be appearing in this year’s I’m A Celeb line-up recently.

Reigning Jungle King Harry Redknapp seemed to suggest Wright was joining the series during one of this shows.

Wright’s BBC colleague Gary Lineker seemed to drop a huge hint confirming he would be taking part this year.

He shared an image of himself with Alan Shearer and Wright on Instagram with his one million followers.

READ MORE: I’m A Celebrity 2019 rumoured line-up: Who is going into the jungle?

Lineker captioned the picture: “Verified Last @bbcfootball before @wrightyofficial possibly, maybe, who knows, disappears for a few weeks. Me and @alanshearer are worried about catching jungle fever.”

Also, at the end of Match of the Day, Lineker said: “You all right Ian? I’m not bugging you?”

He cheekily added as he signed off: “Wrighty’s off to eat leaves.”

On top of all these hints, he also spoke on today’s (November 6) edition of his podcast with Danny Baker about Wright going into the jungle.

READ MORE: What is Declan Donnelly’s net worth?

He said on the Lineker & Baker Behind Closed Doors podcast, Linekar: “I must ask you, did you watch Match of the Day at the weekend?

“Wrighty might possibly – can’t reveal it a hundred percent sure, obviously – but might well be going in the Jungle.

“A lot of rumours which I kind of alluded to during the show. If Wrighty is going in the Jungle, any advice for him?”

Baker, who was on the show back in 2016, responded: “If anyone listening to me now is going in the Jungle this year, you are going to have the time of your life.”

He went on to say: “If you’re going to come out, come out first. But the other thing is, in 42 years of doing this, one of the best gigs – second-best gig ever was the jungle.

“It is fantastic. It is tremendous. Were Ian listening to this, you’ve got to realise it’s a big film set. It’s real up to a point but when you’re in the jungle. You don’t see anyone.

“Two nights in, I noticed – I’m letting daylight in upon magic here – I looked at the lamps that light it, not a single insect was near them.

“Nothing was flying at them, which tells me that area had been treated and cleaned. It’s a big old film set. They treat it very seriously.”

Baker went on to reveal there was about an hour-and-a-half between the trial was announced and the participant was unveiled.

He added: “Should Ian Wright be going in there – a more rambunctious nuisance than I am – it’s a brilliant, brilliant job.”

However, ITV is yet to officially confirm the line-up and Wright’s addition won’t be announced formally until closer to the launch.

I’m A Celebrity… Get Me Out of Here! will be launching on Sunday, November 17 on ITV at 9pm