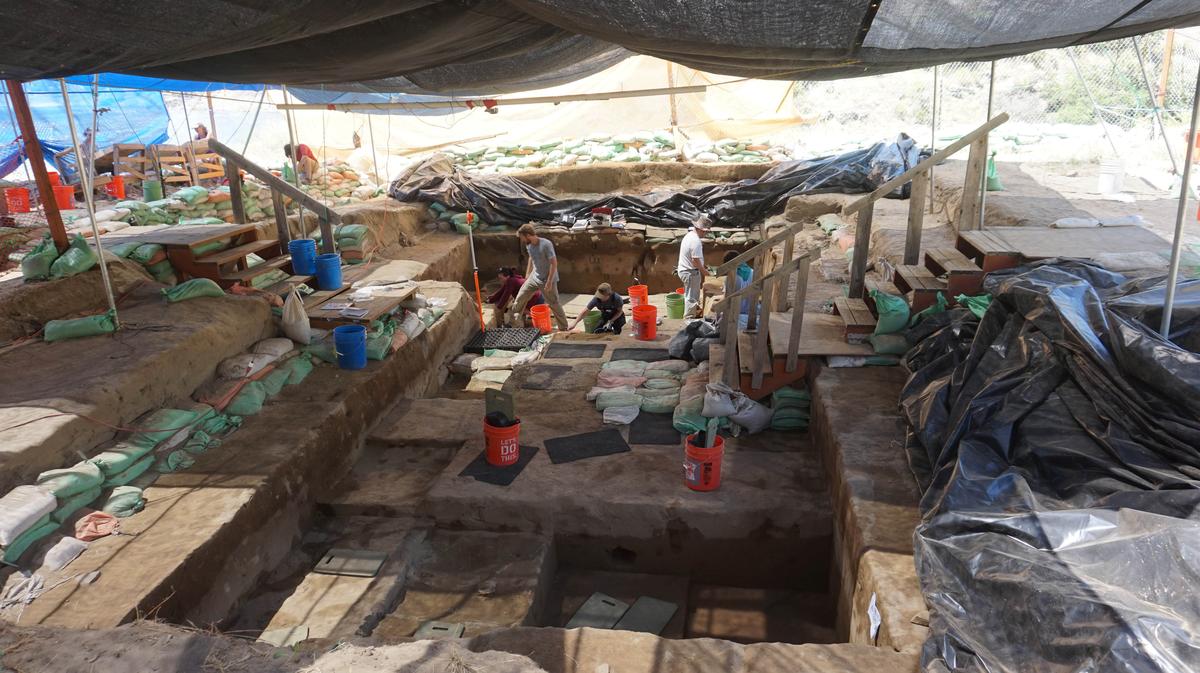 WASHINGTON (Reuters) – Artifacts including stone tools and animal bone fragments found in Idaho dating back about 16,600 years represent what may be the oldest evidence of humans in the Americas and offer insight into the routes people took as they spread into the New World.

Excavation work by scientists at the Cooper’s Ferry archaeological site located along the Salmon River in western Idaho is shown in this image released August 29, 2019. Loren Davis/Oregon State University/Handout via REUTERS

Scientists on Thursday said they used a technique called radiocarbon dating to determine the age of artifacts unearthed at an archeological site called Cooper’s Ferry along the Salmon River in western Idaho near the town of Cottonwood.

People were present there at a time when large expanses of North America were covered by massive ice sheets, and big mammals such as mammoths, mastodons, saber-toothed cats, the giant short-faced bear, horses, bison and camels roamed the continent’s Ice Age landscape.

Based on this evidence, people first lived at the site, which was situated south of the continental ice sheets present at the time, between about 16,600 and 15,300 years ago and returned to live there multiple times until about 13,300 years ago, Davis added.

The oldest artifacts included four sharp stone flake tools used for cutting and scraping and 43 flakes of stone left over from making stone tools, as well as animal bone fragments and horse tooth fragments. Also found at the site were charcoal, fire-cracked rock, a hearth and food-processing evidence.

Our species first appeared in Africa roughly 300,000 years ago and later trekked worldwide. There has been a scientific debate about when humans first entered the Americas, crossing the former land bridge that connected Siberia to Alaska.

The new findings bolster the hypothesis that people in the initial migration into the Americas followed a route down the Pacific coast rather than a route through an inland ice-free corridor as some scientists have argued.

“Cooper’s Ferry is located in the upper Columbia River basin. The Columbia River would provide the first Americans their first route to interior lands south of the continental ice sheets,” Davis said.

With headwaters in British Columbia, it is the biggest river flowing into the Pacific Ocean from North America, opening into the ocean near Astoria, Oregon.

“The people who occupied the Cooper’s Ferry site pursued a hunting and gathering lifeway most likely as small groups of people, likely fewer than 25 people in a group, who made multiple movements each year to access key resources as they were available,” Davis said.

Certain stone projectile points, which would have been attached to the ends of spears or dart shafts, closely resembled examples found in northern Japan dating a bit earlier than at the Cooper’s Ferry site, the researchers said.

“We hypothesize that this may signal a cultural connection between early peoples who lived around the northern Pacific Rim, and that traditional technological ideas spread from northeastern Asia into North America at the end of the last glacial period,” Davis said.

Reporting by Will Dunham; Editing by Sandra Maler

READ  McDonald's rolls out menus that use AI to guess your order to 700 restaurants across the U.S.
Our Standards:The Thomson Reuters Trust Principles.