Ian Wright: Penalty-takers should be decided before the game 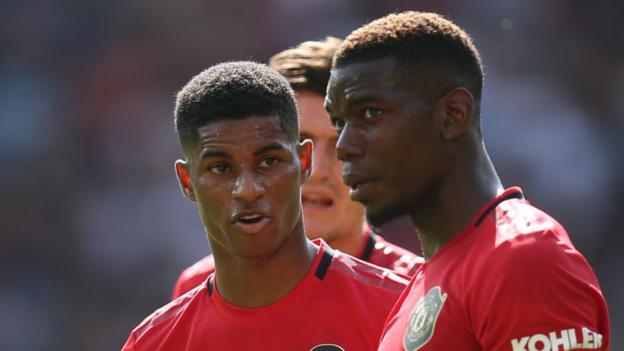 Wright, who scored 20 penalties in his Gunners career, said it was “indecisive” for managers not to have one designated taker.

Wright said he used to take 25 penalties after training to practise.

He said he was “so confident” in his technique that he was shocked when goalkeepers saved a spot-kick.

Wright was responding to the debate around Manchester United’s decision to allow Paul Pogba and Marcus Rashford to share penalty duties this season.

Pogba stepped up to take a penalty he won against Wolves in the Premier League last week – only for keeper Rui Patricio to block his effort.

“The two of them are designated penalty-takers, it’s up to them there and then,” said manager Ole Gunnar Solskjaer after the game.

Rashford, who had a 100% record on penalties for United, took his turn against Crystal Palace five days later, but struck the post – prompting criticism for Solskjaer’s system.

“I think he [Rashford] was too definite with it – he really put the pace on it,” Wright said.

“There was added pressure on him, absolutely there was. If there wasn’t, he wouldn’t have missed.

“When you’re on the pitch and a penalty comes around you don’t want two players over it, that’s indecisive.

“It’s got to come down to the manager to tell them who’s going to take the penalty.”

Wright, who scored 185 goals for Arsenal and missed six from the spot, added: “If I’m playing badly and it is not going well for me and we get a penalty I’m thinking ‘yes, I’ve got a chance to score a goal’.