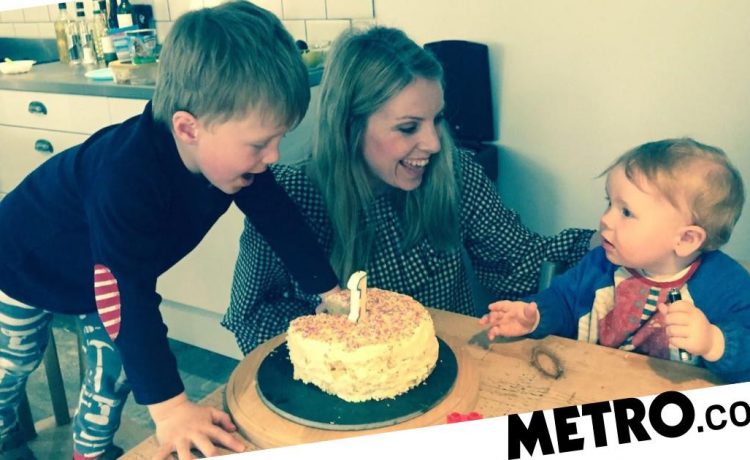 I was sitting in the passenger seat of our Red Rover 45 as we hurtled up the M40 one Sunday morning in 2008.

My fiancé and I had left our one-bed flat in Hammersmith to visit his mum in Tamworth and I’d just heard on the radio it was April Fool’s Day.

Suddenly an idea came into my head. ‘I’ll text your mum and tell her I’m pregnant!’ I smiled. Gone were the days of the childhood pranks of putting salt in the sugar jar or cling-film over the toilet.

I just thought that it would be a quick laugh and my partner was listening to the radio as we drove along so he didn’t really react.

The truth was that we had no intention of having a baby yet. As professionals working in the City, we were having far too much fun going out most nights of the week and holidaying with our mates to be planning a family.

So I duly sent the message to his mum and within seconds an excited congratulatory reply shot back. ‘April fool!’ I replied, and we had a little laugh about it.

And that was that – I didn’t ever give it another thought. That is, until 13 years later.

My fiancé and I got married the following August and then started trying for a baby. Sadly though, we soon discovered it wasn’t going to be easy.

After months of negative pregnancy tests and endless doctor and hospital appointments, (many of which I left in floods of tears), we decided to try IVF.

Doctors had discovered through scans and blood tests that I had mild polycystic ovaries but apart from that they didn’t find any specific issues.

While I jumped to assuming the worst, my husband was quick to reassure me that because we were both relatively young in (in IVF terms), fit and healthy, and neither of us had smoked, that we were statistically in with a good chance of conceiving through IVF.

With our first child we were fortunate enough to conceive on the first round on IVF.

When I found out I was pregnant, to say I was relieved and overjoyed would be an understatement. But I couldn’t relax for the whole pregnancy, acutely aware that anything could go wrong at any time.

The birth was a difficult one and I needed two blood transfusions afterwards. Even when I eventually held our precious little seven-and-a-half-pound bundle in my arms in the early hours of that frosty Wednesday morning in December 2012, I couldn’t quite believe he was here.

And when his brother was conceived three years later, miraculously, after two failed IVF attempts and numerous miscarriages, just as we were debating how many more IVF cycles we could afford (both mentally and financially) I fell pregnant naturally. Words can’t express how grateful I felt to have them both.

By this point, I was fully aware of the fragility of conception and pregnancy. Ours hadn’t been an easy journey, but many have been on longer, tougher ones and many more are still on them.

After having my first son I’d become ultra-sensitive to anything pregnancy and baby related. I never dared ask anyone if they wanted a baby for fear they might be desperately trying for one – like I had for so many years. I agonised over announcing our little boy’s arrival on social media for fear of upsetting any friends who were still trying.

And not a day went by when I didn’t appreciate how truly lucky we were to have two healthy children – I’d realised this was definitely not something that can be taken for granted.

Then, a few days ago I was laying on my bed one evening aimlessly scrolling through social media on my phone when I came across a picture from Parent Bible – a website and Facebook page for parents that offers news and advice.

They had shared an image of a pregnancy test and the words: ‘This is not an April Fool’s Joke! One in four of your friends will have lost a baby and one in six will be suffering with infertility. Pregnancy is not a joke, be more creative this April Fool’s.’

Suddenly, I felt sick to my stomach as I remembered that car journey all those years earlier. It was over a decade ago but it seemed like yesterday – and now I felt so guilty. How had I been so insensitive to joke about it? Had I tempted fate and got my comeuppance?

I was that one in four and that one in six, and I now know from experience how completely and utterly consuming and heartbreaking it can be.

Fortunately, I’m the mother of two wonderful boys now, aged eight and four, but it seems like just a heartbeat ago that I was hiding my infertility from most of my friends and colleagues, too emotional to talk about it and too scared it would jeopardise my career – I was concerned that if colleagues think you’re trying for a baby they might think that’s your priority and skip over you for promotions.

And while I can’t turn back the clock, this April’s Fool’s Day I certainly won’t be pulling any such flippant and insensitive pranks. And hopefully, after reading about my experience, other people will think twice before doing the same.

More needs to be done to raise awareness of the impact infertility and miscarriage can have on both men and women’s physical and mental health.

It’s an issue that seems more pertinent than ever, with the pandemic having hugely impacted fertility treatment. The Human Fertilisation and Embryology Authority (HEFA), which regulates Britain’s fertility industry, stopped all new IVF treatment last March shortly after lockdown was announced and asked clinics to stop ongoing treatments in April, too.

Although most clinics have resumed their services now, I dread to think how many people have missed out as a result of those shut-downs. For instance, many people who were trying later on in life may have had their last chance at conception taken away.

It comes as no surprise to me that fertility clinics have reported a spike in egg freezing during the pandemic and my heart goes out to everyone who is embarking on a journey to have a child.

It’s not an easy path but hopefully, through greater awareness and freer discussion of the topic, more support will become available.

And this year, after what has undoubtedly been for many people the toughest year in history, it’s more important than ever not to pull pregnancy-related pranks on April Fools. We all need a laugh, but there are plenty of other less personal things to laugh about!


MORE : Nearly half of PCOS diagnoses happen when women are trying to conceive, study says


MORE : Woman born with no womb and a 2cm vagina says she has learned to accept her body

READ  A bad smell: why do some dads brag about not changing nappies?
Share on FacebookShare on TwitterShare on PinterestShare on Reddit
newsgrooveApril 1, 2021