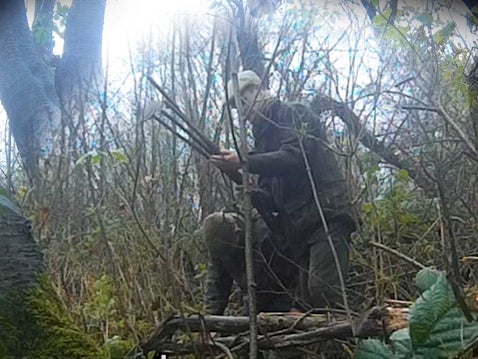 Two men have been caught on camera putting dogs underground and using drainage rods in an effort to force out a fox so it can be illegally chased by a hunt.

Deliberately chasing a wild mammal with dogs was banned by law in 2005.

The men were filmed for several minutes first trying to put terriers into an artificial – manmade – earth to force the animal out. When this did not work, they resorted to poking rods down the holes.

Fox hunts employ terrier men to flush foxes out from underground, often after they have built an artificial earth – or den – to encourage foxes to live in areas that the hunt favours.

At online meetings of some of the UK’s leading hunts people last year, a senior member described the presence of terrier men at hunts as their “soft underbelly”.

He said: “A lot of people would say that if you’re going trail-hunting, why do you need terrier men following you around? Yes, it is totally legal for them to be out doing everything if they follow the correct exemptions, but it does flag up a bit of a marker to everyone: you know, why, as trail-hunting, do you need them there?”

The new film, taken in December, shows a hunt official inspecting the site before the hunt were due to meet, the Hunt Saboteurs Association said.

The men cover the end of the artificial earth with nets to block the escape route, then use dogs and rods in it before the hounds are brought in by the huntsman. The men are heard talking to other members of the hunt on the phone and radio, explaining that the dogs cannot find a fox underground.

READ  What about the 30-50 feral hogs? Man's defense of assault weapons goes viral

As the rods are forced into the earth, the net is removed so that a fox could run out for the hounds to give chase.

But no fox was found and the men are heard saying the hounds would have “ripped apart” anything that had come out.

A spokesperson from the Hunt Saboteurs Association, which says it is considering handing the video to police, said: “This footage shows how integral terrier men are to fox-hunting and despite their attempts to appear lawful, hunts simply cannot stop themselves from acting illegally in their pursuit of killing wildlife.

“This behaviour is shocking, not only in their treatment of the terriers, but in their flagrant obsession with chasing wild animals.”

In 2019 two employees of the Kimblewick Hunt were given suspended jail terms and ordered to do rehabilitation activity days after being convicted of animal cruelty for using pipes to move an underground fox and dragging the animal out by its tail so that hounds could give chase.

A spokesperson for the Grove and Rufford Hunt said: “In the edited video footage allegedly recorded on 12 December, hunt representatives can be seen carrying out exempt hunting activities relating to the use of one dog below ground to protect game birds for shooting, which was being conducted in accordance with the Hunting Act 2004 in full compliance with all of the conditions of the exemption.

“The hunt continues to trail-hunt and carry out lawful hunting activities, as it has done since the Hunting Act was enforced almost 16 years ago.”

READ  'Your cat is watching you!' The fearless felines hidden by their author