Back in 2017, Hugh Jackman bowed out as Wolverine for the final time in Logan. Since then Disney have bought the rights to Fox including those for the X-Men. And even before Evan Peters turned up in WandaVision fans have been speculating that other Fox superhero actors could be about to enter the MCU.

After all, rumours are rife that Tobey Maguire and Andrew Garfield are reprising their Sony Peter Parkers opposite Tom Holland in Spider-Man: No Way Home this Christmas.

While next year sees the release of Doctor Strange in the Multiverse of Madness.

Allegedly, the 52-year-old wasn’t open to proposals at first as he doesn’t want to undermine the epic conclusion that was Logan, in which Wolverine died.

Well, insiders claim Jackman is now open to at least reading a script after Marvel boss Kevin Feige reassured him this wouldn’t be the same Wolverine as Logan, but another one from across the multiverse.

Perhaps a little like how Evan Peters’ Quicksilver in WandaVision turned out to be some guy called Ralph Bohner – well for now anyway.

The outlet was told that if Jackman returns as this alternate Wolverine to the MCU, then the studio would like him to feature in Deadpool 4.

After all, Ryan Reynolds is continuing as the Fox character and in the past he had hoped to make a movie with the Aussie star’s clawed superhero.

Speaking with Digital Spy, Sir Patrick said: “I met with Kevin Feige a couple of months ago and we had long, long conversations.

“And there have been moves and suggestions, which include Charles Xavier.

“Here’s the problem… If we had not made Logan, then yes. I would probably be ready to get into that wheelchair one more time and be Charles Xavier. But Logan changed all that.”

But what if Jackman could be persuaded too? Maybe Sir Patrick would be convinced to come back with him if his character was an alternate one as well.

To add to all this there’s been rumours that the returning Sony villains in Spider-Man: No Way Home like Alfred Molina’s Doc Ock and Jamie Foxx’s Electro similarly look the same as those we’ve seen before, but are in fact alternate versions of their original characters.

This would help explain why they, like Wolverine and Professor X in Logan for example, aren’t dead anymore.

Whatever the case, our best theory is that Marvel Studios are indeed attempting to top Avengers Endgame by having an Avengers 5 based on Secret Wars.

We reckon this would be a multiverse movie where you see say all the Spider-Man actors together alongside different incarnations of other characters which we hope will include some Fox characters too. 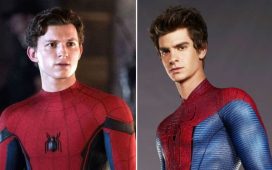