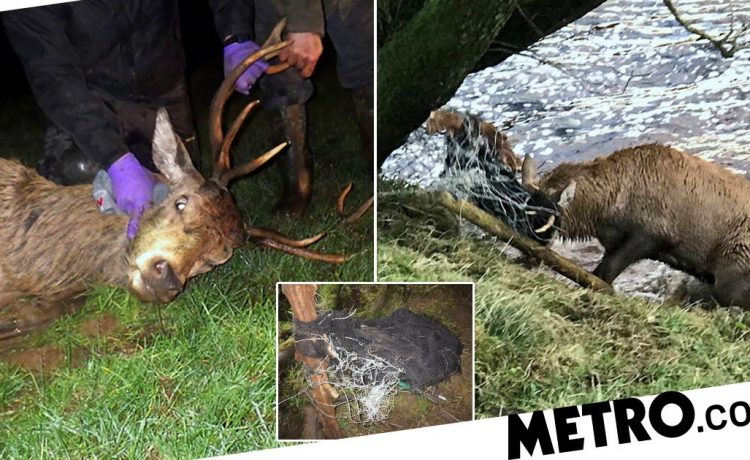 It took three RSPCA officers, a vet and a farmer to free a red stag which had gotten itself tangled in wire fencing and fallen into a river.

A farmer spotted the deer with fencing knotted around its antlers and called the RSPCA.

RSPCA officer Martyn Fletcher said the deer, which was ‘huge’ and ‘the same size as a small cow’, was ‘extremely distressed and very lively, thrashing around trying to free himself’.

‘He had barbed wire, netting, other fencing and three large wooden posts tangled around his antlers and dragging from his head,’ he said.

The three RSPCA officers in attendance called a vet, who tranquilised the 150kg stag and the five of them hauled him onto the river bank.

They untangled the fencing, used the farmer’s tractor to move the deer away from the water and set him free once the sedation wore off.

The group started getting the stag out of the River Lyne in Longtown, Cumbria, on Tuesday afternoon so by the time he was sedated and out of the water it was dark.

Martyn added: ‘That added to the tricky rescue.

‘We started to remove the netting, wood and wire and once he was free we used the farmer’s tractor to move the deer away from the river bank.

‘We didn’t want him to panic and run back into the water once he started to rouse from the sedation.

‘We monitored him from nearby and once he’d regained consciousness he got back onto his feet and, despite being a little wobbly to start with, then started to wander off into the darkness.

‘Once we’d removed all of the detritus we could see he had 12 points on his antlers, indicating his age at around six or seven.

‘Local people say red deer are rare in the area and that this stag had been spotted over recent weeks with some rope or fencing tangled in his antlers.

‘It was a tough rescue in the darkness and in cold, wet, muddy conditions. But to see such a beautiful, powerful animal in the prime of his life finally free and released back into the wild was extremely rewarding.’

The RSPCA is often called out to rescue animals which have got trapped or tangled in netting and fencing.

The charity has urged people to pack netting away when not in use, and to ensure fencing is intact and can’t get caught around a wild animal’s legs or antlers.