How Women In EDM Are Fighting Sexism With Success 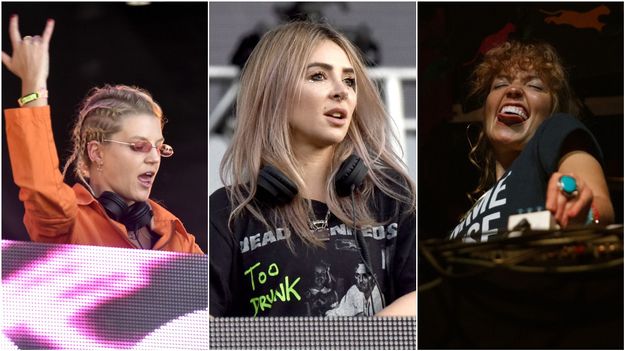 “I’m an artist. I’m not a female artist. I’m a woman and I’m proud of being a woman and I love being a woman. But my art doesn’t have a gender and it never has,” Alison Wonderland (née Alexandra Sholler) emphatically says over the phone two days before her early August headlining set at HARD Summer out in Fontana, California. A conversation about the way people treat women in EDM has the Sydney-born and Los Angeles-based DJ-producer riled up — and understandably so.

Being a woman in music comes with a unique set of challenges — household names like Tiësto or Martin Garrix don’t get asked about being a man in EDM — and is rife with people constantly commenting on your gender instead of your work. Alison Wonderland is over it. She’s a sonic powerhouse in her own right, headlining sold-out arenas around the globe and clocking millions of streams across Spotify and iTunes. Her 2018 sophomore album Awake hit No. 1 on Billboard’s ​Top Dance/Electronic Albums chart. To date, she’s highest-billed female DJ at Coachella alongside Canadian DJ REZZ (with hopefully more to come soon). And recently, Billboard named her one of the 100 top DJs of 2019.

“[Speak] about me as an artist who just sold out two Red Rocks [shows and is] making albums and pushing music forward,” she tells MTV News.

In recent years, there’s been a lot of conversation about representation of women in EDM, which is, like the majority of the industry, dominated by men. They rule the charts, radio airwaves, and media headlines. But nowhere is the gender disparity more visible than festival lineups. Scan the posters of your favorite dance festivals and you’ll generally find just a couple of female names, if any at all. In a 2016 study, the dance music website Thump revealed only 17 percent of headliners at electronic music festivals were women. So what can be done to diversify EDM and the live music scene? Meagan Deschenes, the head of HARD Events, has a simple answer: prioritize diversity in bookings. In her role, she oversees the day-to-day operations of all HARD-branded concerts and festivals for Insomniac Events. One of their biggest events is HARD Summer, the hip-hop-cum-EDM festival headlined by Wonderland this year, and conceived by Gary Richards, the founder and former CEO of HARD Events.

READ  Schoolboy Q, Ty Dolla $ign, And YG Travel Back In Time To A Drive-In Theater In ‘Lies’ Video

While curating each year’s lineup, Deschenes, who’s been with the company since 2007, makes it her mission to amplify emerging talent, especially women. “I really like to book new people [other] people might not even know about, just to educate more fans on other good music that’s out there. …. And I really make a conscious effort to find as many women as I can. If [only] people could see how many offers I sent out to book women versus how many I actually was able to get. I sent so many. I really try to make the lineup diverse [so it has] something for everyone,” she tells MTV News.

Music has no boundaries and spans cultures., so people of all backgrounds should be allowed to participate without judgment, says GG Magree, an Australian DJ, producer, vocalist, who’s been making waves in the dance-music sphere for her mesmerizingly sweet vocals and high-energy live sets. “I just think that if you pocket things, it’s just not the right way to do things. Music is universal. It should be open,” Magree stresses to MTV News over the phone after a whirlwind weekend performing at HARD Summer.

For the 12th year, 170,000 music fans converged at the Auto Speedway in Fontana from August 3 to 4 to watch a medley of artists — from heavies like Alison Wonderland, Kid Cudi, Major Lazer, and Claude VonStroke to up-and-comers such as Cam Girl, DreamDoll, and LP Giobbi. Notably, an array of female talent was front and center, thanks in part to Deschenes’s booking efforts.

GG Magree shook Saturday’s crowd with high-octane energy. Later at night, Alison Wonderland’s treated fans to an explosive and headbanging mix. And on Sunday, fans got a taste of some gritty trap from Cam Girl and new music from LP Giobbi. This kaleidoscopic and variegated lineup injected some much-needed diversity into a genre historically ruled by white men.

Yet many female dance musicians often find themselves having to prove to their peers that they’re not just not a pretty face. “People on the outside [are always] thinking you fucked your way into the industry. I worked my fucking ass off to be here,” Cam Girl tells MTV News. “I didn’t have to do anything to do that except for hard work, not sleeping, [and] not going out. I lost all of my friends from practicing and getting better at my craft. I just want some recognition for the hard work that goes behind this instead of [people being] just like, ‘Oh, you’re just cute.’”

As an L.A.-based DJ/producer, a co-owner of Animal Talk Records, and an all-around synth master, LP Giobbi knows how frustrating it can be for women in the industry, constantly having their talents and capabilities questioned. So in 2019, she created an inclusive nonprofit workshop called Femmehouse, an educational platform addressing the lack of representation of women in electronic music by holding monthly workshops where musicians can learn how to produce and engineer music. “When you walk out of this room with the knowledge of something new, I want you to feel empowered; you can now take this skill set and also just knowing that you can do something and make something in other parts of your life. That’s a powerful tool,” she says.

One notable reason LP Giobbi believes there might be a big gender and racial gap in the dance world is because of high costs associated with creating music, which can be a hindrance for people without the necessary resources. Femmehouse is on a mission to change that. “A big, big barrier for producers is money. Gear is really expensive, computers are expensive, headsets are expensive. It’s been really important for me to try to help lower that barrier to entry and then also creating a safe space with a bunch of other women to ask whatever questions you need to ask. I’ve been given a lot of opportunities and it’s my duty to pay that forward,” she says.

In the late 1970s, house music — to which many of today’s dance musicians can trace their roots — was born out of Chicago’s gay, Black party scene to radically break down racial, sexual, and gender barriers. Since then, the sound has transformed, due in part to the rebranding efforts of the U.S. music industry, and in turn, the face of it has completely changed — with names like Calvin Harris, David Guetta, and Martin Garrix leading the pack. But for a genre descended from a subculture thriving with both diversity and political struggle, dance music will suffer if only a handful of artists are showered with attention.

Cam Girl looks at the progress made so far and thinks it’s just a matter of time. But she also stressed how important it is for organizers to keep making it happen. “When I started going to electronic music festivals, there was like maybe one, maybe two female DJs. Now, shout out to Alison Wonderland, shout out to Anna Lunoe — they’re killing it. Mija, all those girls. But if you look at girls like me and other ones, we’re not playing the main stages and we’re not playing the main set times. And I’m just waiting until it’s like 50/50,” she said.

As this year’s HARD Summer proved, women are killing the game across the spectrum of dance music, proving that your gender does not define your success. And all the women interviewed for this story remain hopeful about the future of EDM, especially Deschenes, who’s been working in the industry for over a decade. “I’ve seen it evolve a lot. When we first started HARD, there really [were not] any women, so from then to now, there are some big top women that can headline a stage [and] can headline a festival and are making equal money [to] men,” she said. “It’s just finding more of those, because now there’s only so many and now there’s so many festivals, it’s kind of a fight to get to share them.”