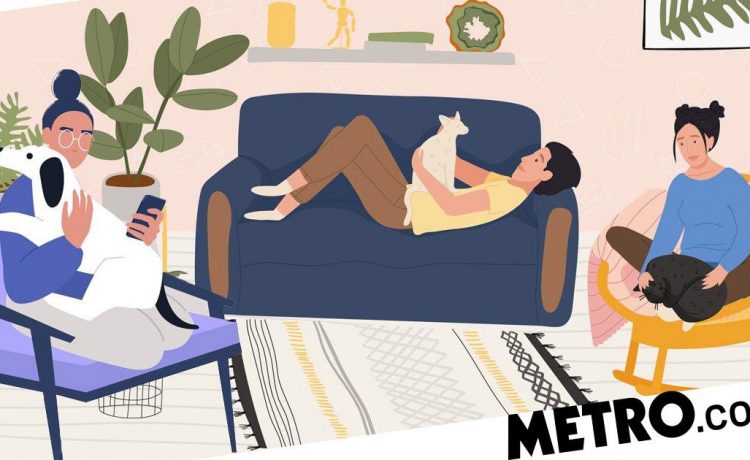 Being trapped inside the house for months on end has meant the bonds with our four-legged friends are stronger than ever.

It’s safe to say that pets have become accustomed to humans spending every waking hour with them. But now, with restrictions slowly lifting (hopefully for good), our cats and dogs will have to prepare for more alone time.

To ensure they don’t get distressed or start suffering with separation anxiety, there are few things that can help prepare them for change.

Take it in small steps

A study from last year showed that more than half of pet owners are worried about leaving their beloved animals at home when life returns to normal.

Ryan Neile, head of behaviour at Blue Cross, says: ‘The best way to prepare pets for the adjustment is to train them.’

If you have a dog then a stair gate is a great tool to help canines adjust to being left alone.

‘They aren’t as scary as a closed door as they still allow your dog to see, smell and hear you,’ explains Ryan.

‘Randomly during the day, pop your dog behind the stair gate with a tasty chew, e.g. a Kong toy stuffed with treats or smeared with pate. Close the stair gate behind you and go about your business as normal, but try to stay in eye and earshot of your dog.

‘After a few minutes, open the stair gate – ideally you want your dog to be relaxed and still engrossed in the treat. Your dog can decide what they want to do at this point, either stay in the room or leave.’

Ryan explains that over a period of days, you can gradually increase the time your dog is left behind the stair gate until you get to a point that they feel relaxed enough for you to wander completely out of sight.

Then build your dog up to being left in this area for up to half an hour while you are busy elsewhere in the house.

He adds: ‘Once your dog is comfortable with this, you can begin to get them used to short periods of time alone in the house.’

Rosie Barclay, a clinical companion animal behaviourist for Rosewood Pet, says: ‘Encourage activity that doesn’t involve you all the time. Hiding food around the house and garden is a great way to keep your pet happy.

‘You can simply place a few pieces of your pet’s own allotted amount of food around on the floor and also in interactive puzzle toys, licky and snuffle mats for them to find.’

This will help your pet get used to their own company, so it won’t be such a shock when humans are no longer around.

Put the radio on

Our pets are now acquainted with constantly active households, with owners working from home for the past 12 months.

So, as we start to gradually return to the office or get out and about more, it can be a good idea to leave them with some background noise – so the house doesn’t seem completely empty.

Ryan adds: ‘Many dogs will benefit from being left with a radio on low level as this provides a little background noise and “company.” It may also muffle any startling sounds from the outside, which might otherwise disturb your dog. Talking stations are best, as opposed to loud music.’

Give them an item of your clothing when you leave

‘Putting an item of clothing you’ve worn recently in your dog’s bed may also increase your dog’s sense of security during the training and when they are left alone,’ adds Ryan.

It works as a nice physical reminder for a dog or cat when their owners aren’t around.

Keep calm and carry on the same

Much like children, our pets can pick up on our emotions. So if we are feeling stressed or anxious, they can absorb this energy.

Rosie says; ‘Your pets are likely to pick up on how you are feeling. They may see you are acting differently and even smell the chemical change in your scent profile but they won’t have a clue as to why. This may lead to them feeling distressed. In other words, they become worried about this change in your behaviour and scent.

‘So, try and act in the same way as you did before the lockdown when around your pet. When you need to let off some emotional steam, give your pet something nice to do and move away to another room.’

Ryan stresses that anxious or distressed signs to look out for would be an increase in their heart and breathing rate – which may result in panting and or salivating.

He adds: ‘You may also notice increased activity such as pacing and they may also need to go to the toilet more often.

‘Your dog may try to follow you as you leave, scratching at doors, chewing at doorframes, scratching at carpets or jumping up at windowsills to see where you have gone or to look for a way out. They might also bark and whine or howl.

‘If, after returning home, you discover that your dog has made a mess, damaged or chewed furniture, never punish them or tell them off as this is highly likely to make the problem worse. Instead speak to your vet and contact an qualified reward based behaviourist via the ABCT (Animal Behaviour Training Council) for the right help and support.’


MORE : Warning to new dog owners, as expert reveals we could be injuring ourselves on walks

READ  Why do men -- and other male animals -- tend to die younger? It's all in the Y chromosome
Share on FacebookShare on TwitterShare on PinterestShare on Reddit
newsgrooveMarch 26, 2021