How to do a social media clean 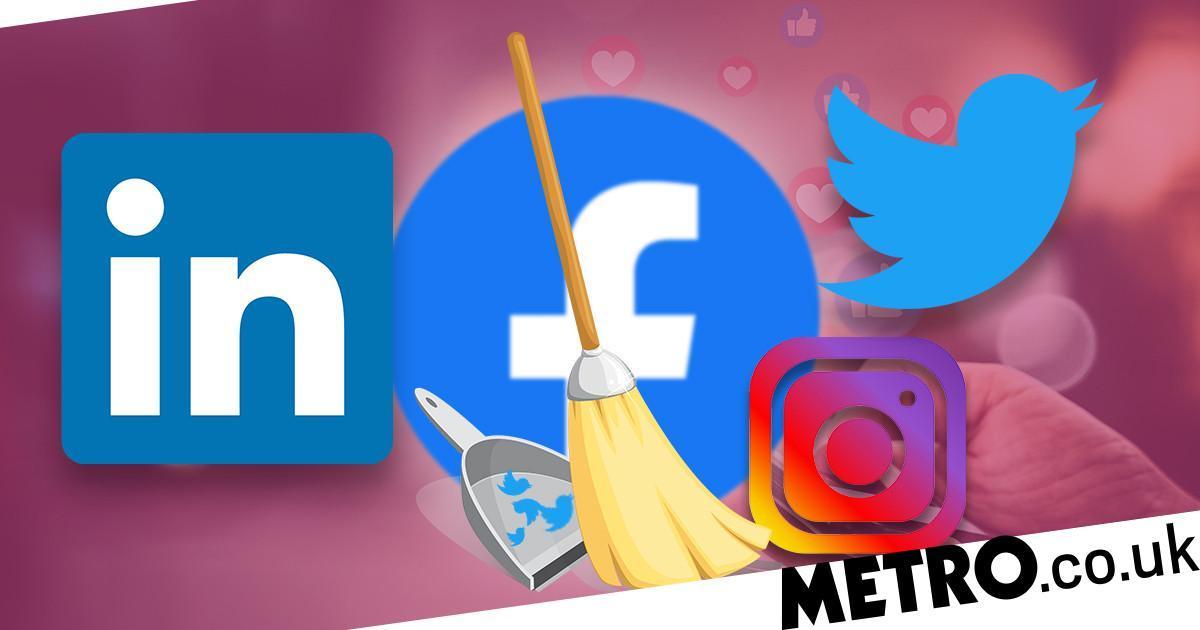 There’s no shortage of stories of people whose social media past has come back to haunt them.

An old tweet or awkward Instagram photo isn’t just potentially embarrassing, but it can also have serious consequences, especially if you’re a public figure or celebrity.

For instance, who can forget when Justine Sacco, a PR executive, sent out an incredibly offensive tweet as she was boarding a flight to South Africa, which not only cost her a job but also saw her make headlines for months.

More recently, Emmerdale actress Shila Iqbal was fired because of a series of tweets from 2013, that were uncovered just as she had signed a permanent contract with the soap.

It’s not just famous people who are at risk of being exposed or shamed on social media.

Let’s say, for instance, that you’re sat in a job interview for a management role for an animal rights charity that strictly opposes the use of fur. Then imagine that the person you’re sat across from decides to Google your name and finds an old Facebook photo of you at a party, wearing a fur coat.

Or perhaps you lied about your skills and one of your many social media profiles give you away.

There are many scenarios that can get you into trouble, and even if you might have meant something as a joke, it’s out in the ether for everyone to see. That is, unless you clean up your digital profiles.

Unfortunately, it can be very time-consuming to clean up your Twitter profile, for two reasons.

Firstly, the social media platform doesn’t have a function that allows you to bulk-delete tweets and secondly, your profile only displays 3,200 tweets at any one time (meaning that if you’ve been a member for years, you can’t scroll that far back).

Thankfully, it’s not a complete nightmare. If you know around what time period you sent out inappropriate memes and cringe-worthy tweets with phrases like ‘live, laugh, love’, you can search for it.

Through the advanced search method, you can find tweets through date ranges, keywords, phrases and hashtags. Once you’ve set your criteria it will bring up the results that relate to it, but here’s where it gets a tad annoying. You have to click on each of these tweets and manually delete them, a process that could take hours, days or even weeks, depending on how frequently you tweet.

Do note that there are external mass-deletion programmes that allow you to delete multiple tweets at once, such as Tweetdeleter, but Twitter doesn’t recommend using them as they can mess up your account.

The choice is yours, but you’ll have to pay for these types of services (though some of them are pretty fairly priced).

Facebook is easier to clean up, but can also take a long time depending on how much content you have on the site.

Deleting photos is fairly straightforward, however do remember that it’s not just your albums that you’ll need to sift through.

Any photos that were uploaded on their own on your wall will show up in the ‘Your Photos’ section, which – if you have hundreds of pics – can lag when you’re scrolling through it.

Albums on the other hand can be deleted in one go, so that you can easily get rid of the ‘Ibiza memories’ album that features a few dozen pics of you doing body shots and not much else, if you want to.

Now, for the posts.

You can choose to hide or delete any post from any date, but we’re assuming you’d rather not start from today and delete them one by one until you get to the post about how much you are ‘like OMG totally crushing on Joshy from the gym’ (who ended up being a dick).

Here’s what you do: open Facebook, go to your profile and then click on ‘Activity log’, a little button located at the bottom right corner of your cover photo.

Once you’re on the page, you can choose the year that you want to focus on, and after that you have two options.

You can either scroll through the entire year and delete or hide posts one by one or alternatively, use the activity search bar in the top right corner and search for keywords, such as your ex’s name, for instance.

The best part about using this function is that it will bring up any posts that contain the word(s) you’re searching for, including messages that you have left on other people’s walls.

In the sidebar on the activity log you will also find other categories that could speed up the process, such as only looking at posts that others have tagged you in or other people’s posts on your timeline.

You can even look at what posts you have liked or commented on.

Additionally, if you’re tired of the content that pops up on your timeline (like annoying and repetitive ads) or want to amend what people can and can’t see on your profile, you can use Facebook’s privacy cleanup tool, which was launched last year.

It’s essentially one page where you can find privacy shortcuts.

If you’ve been using the platform since its inception in 2010, there are probably a wide range of photos on your profile.

For those who are happy to show off their high school mullet or that time they decided to shave off one eyebrow, we salute you. You do you, be proud and show off that sexy look.

However, if you’d like to get rid of a few photos or have so many uploaded that the app keeps lagging, there is always the delete button – but once again, you can’t do this in bulk within the app.

There are some third party apps such as Instant Cleaner that offer such an option, but there are risks when you use an external service (such as giving them access to your information and photos).

You can also choose to hide photos with Instagram’s new archive tool, which means your followers won’t see them, but you still can. Archiving a photo also retains all of the likes and comments on that pic, in case you ever decide to reverse the process.

To use the tool, click on any photo on your profile and then proceed by clicking the small grey dots in the top right corner. This will bring up a variety of options, including ‘archive’.

Note: you can only use the archive tool through the app, not on a desktop.

Remember, if you don’t like any of the content on your social media platforms then you can always delete them completely and rebuild them from scratch – and be careful with whatever you put out there in the future.

Alternatively, you could set your accounts to private so that only people you are friends with or allow to follow you will have access, but this still poses a risk.

If you think that there’s content out there that would embarrass you or offend someone else, do the smart and polite thing, and delete it.

Everyone makes mistakes and we all say stupid things, but once you’ve written them down and sent them out into the world, they’re out there forever.

Or, until you delete them.

MORE: Amazing Twitter thread shows the hypocrisy of what we expect from the rich and poor

MORE: Are finstas and hidden accounts the answer to pressure to be perfect online?

READ  Hotel offers luxury day out for homeless shelter dogs and it is too cute
Share on FacebookShare on TwitterShare on PinterestShare on Reddit
newsgrooveAugust 31, 2019