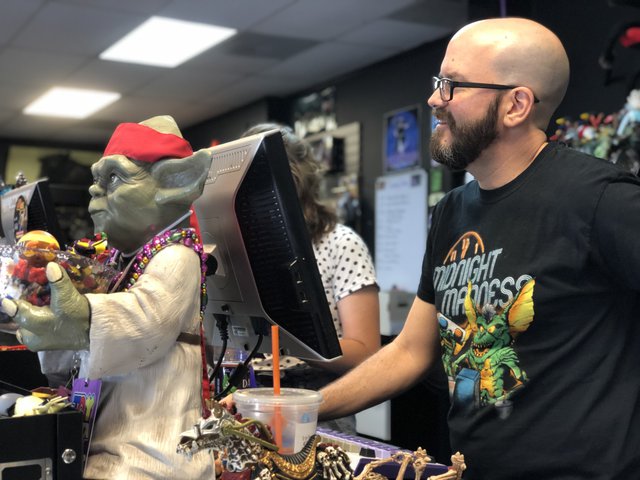 Josh Hornor likes knowing who the people who come into Wizards Video Games are. With competitors like GameStop, Wal-Mart and Best Buy all within throwing distance of the Gainesville independent store, Hornor wants the store he owns to be the informed, personable and community-ingrained alternative to big chain stores when it comes to buying and bonding over video games.

This goes beyond knowing the names and faces of people who walk through the store’s mural-covered entrance into its memorabilia-covered walls — it’s about knowing what they like, what might interest them and maintaining a relationship that goes beyond the transaction of a video game, comic book or figurine.

A dedicated video game store owned and run by people as passionate and knowledgeable about the games they sell as the people who come in to buy them draws in people looking for an experience. But stores like Wizards are fighting to exist in an industry that’s implementing digital-driven policies and platforms.

Stores like Wizards and Buford’s Video Game Trader have seen the effects digital distribution is having on declining physical game sales, and that means stores have to find ways to survive in a digitally driven future by expanding into adjacent markets of comics, toys and other merchandise, all while trying to maintain the games-centric business and community both have accumulated in the past decade.

GameStop, the biggest chain in the business, is suffering its biggest annual loss in company history and closing down online affiliate stores. Meanwhile, game companies are pushing toward digital storefronts on services like Xbox Live and PlayStation Network hoping buyers will download games through online platforms instead of buying physical games at stores like GameStop, Wal-Mart or Best Buy. Google is developing a new streaming service called Google Stadia, which will allow people to stream video games on Google devices; Microsoft has released a new Xbox One S console that doesn’t have a disc drive to use physical games and online stores like Steam and the Epic Games Store have already rendered physical PC game sales mostly obsolete.

As these corporations look for ways to maximize their profits by cutting out the middle men, the walls are closing on physical video game sales, and for stores like Wizards and Video Game Trader, that means adapting to the shifting market or die trying.

According to Hornor, the fear that the suppliers of the store’s product have been trying to push them out has been a persistent black cloud over the store since it opened 11 years ago as a chain store called Play N Trade.

“We started as just a games store, and when we were first thinking about doing this we knew where it was headed,” Hornor said. “We’re all gamers, we’d already bought digital stuff. So we planned on the basic business model of just doing used games and new games and that was maybe going to last five or 10 years.”

While “video games” may still be part of the store’s name, Hornor estimates games themselves account for two-thirds of its merchandise. Getting to this point has been a gradual process, as the other third of items on sale at Wizards ranges from toys to comics, all in the name of expanding the store’s catalog for the inevitable digital future of video games retail.

“It was kind of a natural progression,” Hornor said. “It’s not even something we planned way in advance, we just started taking comics because we talked about it. The toy thing, we’d kind of messed with it a little bit, then we ended up working a deal out with Billy from Billy’s Toys when he went out of business and we ended up with a ton of toys. It just all kind of happened organically. I’d like to say we planned it all out 10 years in advance but we did not.”

For Video Game Trader owner Tom Sansone, who officially opened a brick-and-mortar shop in 2010 after 11 years as an online store, outmaneuvering the shift to digital has been easier, as the store primarily focuses on retro games instead of keeping up with modern games and systems. There are still modern products for sale at the store, as well as merchandise like vinyl records and board games, but much of Video Game Trader’s stock is made up of product that dates back between 20 to 30 years, like Nintendo Entertainment System games and Super Nintendo Entertainment System games — systems that launched in 1983 and 1990. This focus on older collector items and games has given products a longer shelf life, circumventing the shift to digital almost entirely, for now.

“I don’t worry about the new consoles, I worry about the old stuff,” Sansone said. “Even if the next set of consoles were completely online only, no physical format at all, I’d still have another 25 or 30 years of the business before we’d go away.”

Honing in on older games has revealed some unexpected things about the retro market, according to Sansone, which he says has given him hope that, as long as things like gaming YouTube channels maintain public interest in older games, he should have a market for older products.

“When I first opened this store I wouldn’t have foreseen that 12-year-olds are going to want to play NES games,” Sansone said. “I thought it would be the people that played them a long time ago that would want to play them again. With YouTubers and all these people playing retro games and doing historical videos on them, a lot of the customers that are buying older stuff are younger people that weren’t even alive when it came out,”

Wizards has managed to outlast the timeline Hornor originally projected, but the signs that companies like Microsoft were trying to push stores like it out of the equation have sprouted up several times over the years. When the Xbox One was originally revealed in 2013, Microsoft planned to only allow physical game discs to grant one license per device, which would prevent people from borrowing each other’s copies, as well as cut the used games market, a pillar of video game stores’ business model, off at the knees. This was quickly altered after overwhelming negative reaction from the public, which both Hornor and Sansone expected, but it didn’t stop apprehension about where the industry was headed.

“It was scary,” Hornor said. “Any time any kind of announcement like that happens it’s like ‘OK, if it’s what the hype says it is that could be a problem.’ So far most of those things haven’t really been a huge issue, but back then I was like, ‘Oh man, this is going to suck. If they actually pull this over on everybody we’re going to be going digital much faster than I was thinking.’ So fortunately it didn’t work out that way.”

Microsoft’s initial plan to cut down physical sales may have failed, but it hasn’t kept the push toward digital sales from affecting Wizards and Video Game Trader’s business in smaller, but noticeable ways. Gift cards, which are usable on online stores on services like PlayStation Network, Xbox Live and the Nintendo eShop, are for sale at most stores that sell video games, but two years ago Wizards opted to stop selling them after an uptick of interest meant the store was losing money in selling them.