NewsGroove Uk
NewsGroove Uk > Politics > How much will my Council Tax rise in April 2020? Search by postcode for your area
Politics

How much will my Council Tax rise in April 2020? Search by postcode for your area 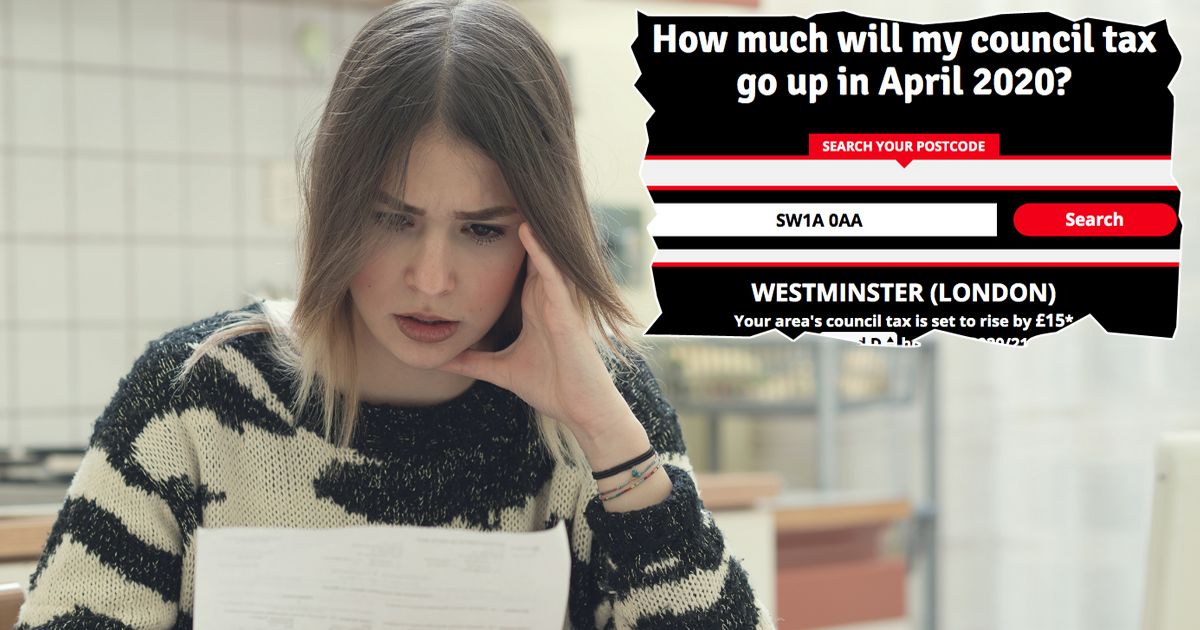 Millions of families will be hit with yet another inflation-busting Council Tax rise in April.

Almost every town hall in England is raising the annual charge by the maximum possible 3.99% – more than double the inflation rate of 1.8%.

That will leave the average county council resident paying an extra £69 while those in London fork out £45, according to the County Councils Network.

Our research shows Dorset, Rutland and Nottingham are among areas that will see a family’s Band D bills top £2,100 for the first time.

But the final rise will actually be higher, because our figures don’t include separate tax hikes on behalf of police and fire authorities, or district or parish councils.

Out of 151 councils in England that look after social care, not one council is freezing its council tax and fewer than 15 are slapping on a hike of less than 3.9%.

Only two – Derbyshire County Council and Wigan – are opting for less than 3%. Both are imposing a rise of 2%.

Overall, 2% of the allowed rise is to fund cash-strapped social care while the other 1.99% is to plug general gaps in councils’ budgets.

Local government minister Luke Hall has insisted the funding package will provide a £2.9billion rise in council spending – 4.4% in real teams – including £1.5billion for social care.

But Labour say more than half this cash boost is only happening thanks to the above-inflation Council Tax rises – which essentially pass the buck to local families.

Many councils have also warned they may raise charges for services such as parking, garden waste disposal and aspects of social care.

So how much will your council tax rise? Enter your postcode below to find out.

How much will my Council Tax go up?

Enter your postcode and select your Band below to see your area’s projected rise in April 2020. Scroll down for a fuller explanation of what the figures mean. Search tool compiled by Carlos Nóvoa and Claire Miller.

What is my Council Tax band?

Houses are ‘banded’ from Band A to Band H depending on how valuable they are, and a formula is then applied to the Band D rate to determine how much you pay.

In theory Band D is the average home, though in some areas – poorer parts of the north of England for example, and in Northumbria – the majority of homes are actually in Band A.

So some councils contest the idea that a Band D home is ‘average’, because actually most people are in the cheapest bracket.

You can search for your Council Tax band here or find it on last year’s bill.

Do I get a Council Tax discount?

Several groups can get a discount off the full rate of Council Tax or not pay it at all. They include:

However, if you’re in a mixed household you may still have to pay the full rate. Use the government’s tool here to see if you’re eligible.

Why is Council Tax going up so much?

Councils say they have to plug billions of pounds in gaps caused by a year of Tory austerity.

Town halls are also facing the costs of an ageing population, which is why so much of the rise goes into social care, while the government takes time to find a permanent solution.

The County Councils Network warned even with this year’s eye-watering rises, councils will face a £19bn shortfall by 2025.

Chairman David Williams said: “No council leader wants to raise their council tax, especially after residents have faced rises over the last few years. But today’s figures show we simply do not have a choice.”

He added: “The government must use the March Budget to signal that councils will receive a further cash injection in the Spending Review.”

What do the Mirror’s figures include?

Your council tax is made up of several different sections called “precepts”, which all rise at different rates.

We have calculated using the rise in by far the biggest precept, your social care authority.

Your social care authority (a County, Met Borough, London Borough or Unitary council) can rise by up to 3.99% this year, depending on where you live.

What do the Mirror’s figures NOT include?

Our projected bill does not include the rise in the precept for parish councils, smaller district councils,fire authorities, police authorities or the Greater London Authority.

It includes those precepts at last year’s rates, but without the rise expected in April.

However, these precepts are comparatively smaller – so the rise to all of them is usually less than £10-20 put together. A little more for the Greater London Authority.

Our figures also only apply to the council system in England, not Wales, Scotland or Northern Ireland.

If you live in a new build home, it might show an invalid postcode because it is too new for our database.

And finally, in some cases our widget shows recommended rises, not the final rates agreed by councillors at their full Budget meeting.

Sometimes these final meetings can slash hikes in council tax due to a backlash. However, this kind of last-minute climbdown is relatively rare, especially in councils which are majority controlled by one party.

Our figures were sourced from finance reports to Cabinet/Executive and Full Council meetings. If you believe we need to update your area’s figure please e-mail dan(DOT)bloom(AT)mirror.co.uk with the subject line ‘Council Tax’.