Harry Styles has got the whole world talking with a rare interview but how much do we really know about the charismatic star?

Harry Styles is an enigma.

Unlike his social-media loving peers, the 25-year-old singer rarely tweets and hasn’t posted on Instagram in over a year. In addition to allowing him to maintain an air of mystery that is refreshing in an age when we know what most popstars eat for breakfast, it has also permitted his fans to project whatever attributes they want on to him, without the danger of him proving them wrong.

‘Sex, psychedelics and the secrets of stardom’ is what Rolling Stone magazine promised in its new profile of Harry, and it has delivered.

But, how it delivered is entirely up to the reader.

There is something for everyone in this article, a hugely enjoyable read thanks to the talents of writer Rob Sheffield, but also a carefully curated look at Harry’s life, courtesy of the savvy machinations of Styles and his team.

Let’s start with the sex.

Speaking about his new album Harry said: ‘It’s all about having sex and feeling sad.’

But who is Styles sleeping with?

If you believe the straight-Harry womaniser narrative, we’ve got a story from producer Tom Hull AKA Kid Harpoon about how model Camille Rowe broke Harry’s heart. But there’s also a nod to those who think Harry is bisexual or pansexual, with Harpoon recalling the advice he gave his friend as ‘Just date amazing women, or men, or whatever, who are going to f**k you up.’

And, for the Larries out there (those who claim Harry is in a long-term secret relationship with One Direction bandmate Louis Tomlinson), there’s plenty of reasons to keep believing, including Harry’s obsession with Joni Mitchell’s Blue, a colour fans have come to associate with Louis due to the tape on his microphone during their 1D days (Harry’s was green).

No matter what you believe, by refusing to directly comment on his love life but letting his friends do so, Harry manages to maintain that elusive air of mystery while allowing his fans to project their ideals on to him.

What about the psychedelics?

Harry cops to taking magic mushrooms, or ‘shrooms’, to help the creative process during the making of his new album.

This is an insight into a new grown-up, edgy Harry, leaving his clean-cut boyband days behind by admitting to taking drugs. But, if you want to believe he’s still that sweet, innocent boy at heart, you can remind yourself that it’s mushrooms – the safest ‘recreational’ drug to take, according to the 2017 Global Drug Survey – and not crack cocaine.

It’s not beyond the realms of possibility that a 25-year-old world-famous musician is being exposed to drugs in the music industry but could it also be that this is just a clever way to attract a new audience while not alienating the younger fans?

Will it help him to appeal to a different fan-base than the one he’s bringing forward from his 1D days?

It’s also worth noting that the alcohol of choice for Harry and his fellow musicians in their Malibu studio is Casamigos, the tequila brand founded by his good friend Rande Gerber (alongside George Clooney), which gets a solid plug in the article.

The Directioners are not left out as Harry talks about how much he enjoyed being part of the group and the fun he had.

He refuses to disparage his time in the band, or rule out a reunion, leaving a sliver of hope for those who are anxiously waiting for the band to end their ‘hiatus’, saying: ‘It’s too important to me to ever be like, “Oh, that’s done”.’

However, he makes it clear that his own music career is the priority right now, leading solo Harries to breathe a sigh of relief.

Harry also flip-flops on his friendship with the other members of One Direction – Tomlinson, Liam Payne and Niall Horan (and perhaps Zayn Malik, who left the band earlier) – allowing the reader to interpret it how they wish. Brothers, best friends, casual acquaintances, friendly former colleagues, bitter enemies? You decide.

We’ve seen in the past how an air of mystery can elevate an artist. Beyonce rarely does interviews anymore, preferring to communicate with her fans through her work or caption-less pictures on her Instagram, and Adele tends to disappear when she’s not working.

Harry’s approach is different, instead of the aloofness of Queen Bey or the vanishing act of Adele, on the surface he appears an open book. He gets papped often and it’s rare that a few weeks go by without a smiling picture of him showing up on fan Twitter.

But has he actually just managed to find a way to say a great deal, without revealing any of his secrets?

We’re told ‘he’s asking questions about culture, gender, identity, new ideas about masculinity and sexuality’, but what those questions are is anyone’s guess!

MORE: Harry Styles bit off the end of his tongue after taking mushrooms

MORE: Harry Styles appears in short shorts after killing the fandom with that Rolling Stone cover 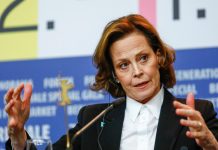 Alessandra Ambrosio shows off her supermodel curves in rust bikini