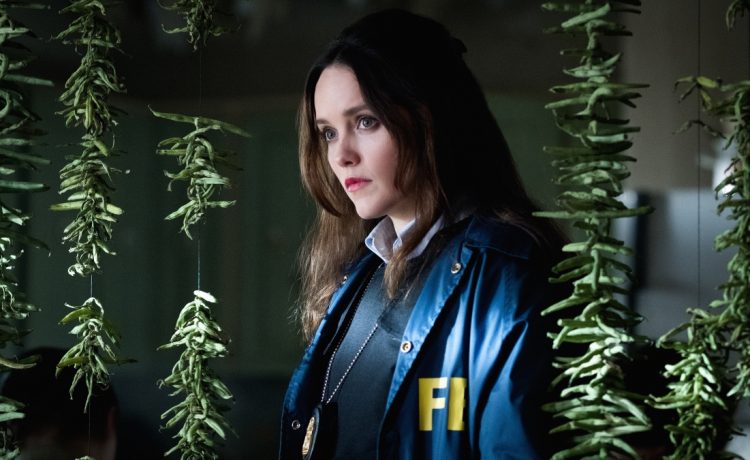 Rebecca had her finger on the pulse of that from, really, her audition. She was stunning. I think it was a last-minute decision for her to add an Appalachian accent. She added the accent and then she said, “I just found Clarice.” And for all of us, the reason why we’re all showing up to work every day is because we’re incredible fans of Thomas Harris’s universe. His novels, yes, but also the movie. Jodie Foster is an incredible actor who gave an incredible performance and really embodied this character. So, honoring Jodie and her performance has always been paramount in all of our minds and yet we need to move forward and fully embrace Clarice as our own. And for us; for Alex, Jenny, myself, and Rebecca, the answer to that question has always been a truthfulness in writing and then a truthfulness in acting. That if the moments are real and genuine and fully present for all of us, then it becomes its own thing. It takes on its own life.

Due to the rights situation Hannibal Lecter is a notable absence, but in some ways a bigger one is Jack Crawford, who fulfilled the mentor role to Clarice in The Silence of the Lambs. Did you feel in any way limited by not being able to use him?

It’s interesting to look at the events of The Silence of the Lambs and the relationship with Crawford purely from Clarice’s point of view. For me, that relationship became caught up in the trauma. I feel like we are honoring his presence in her life, but in a very unpredictable way. When she went to see Hannibal, I feel like she was being given, yes, one of the most exciting opportunities of her life, but also being thrown into the deep end of the pool. And that’s part of what she carries with her. One of the definitions of trauma is “too much too fast”.

Clarice got too much, too fast, and now she’s unraveling that. So to my mind Crawford is a part of that. And that is how we’re paying tribute to him in our show. That’s how we’re thinking of him. And then to your point earlier, I feel some of the more mentor pieces of Crawford have become part of the Krendler character and will grow their relationship. It’ll have a lot of ups and downs, of course. But I think there are pieces of him in her relationship with Krendler.

One of the complex things about the relationship with Crawford is the fact that it is inherently built on an act of manipulation. He sends her in without giving her an agenda so that he can try to coax information out of Lecter.