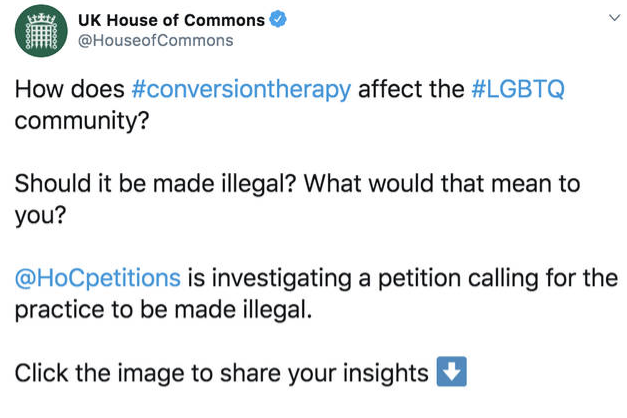 The House of Commons has apologised after tweeting about whether gay conversion therapy should be made illegal.

The Commons’ official Twitter account shared a link to a consultation on Friday, following a petition with 186,000 signatures calling on ministers to ban the harmful practice for the LGBT+ community.

The caption read: “How does #conversiontherapy affect the #LGBTQ community?

The House of Commons eventually deleted the tweet and apologised for any offence caused, adding that they “misjudged this”.

It said: “We have deleted a tweet about a petition relating to #conversiontherapy that caused offence. We apologise.

“Our intention was to provide a platform for people to share their opinions with the Petitions Committee, and inform its case to the Government. Clearly we misjudged this.”

Later the House of Commons’ announced that they had closed the original consultation to new responses and would open a fresh survey next week.

It said this new survery would include “questions that better reflect the aims of the Committee’s work on this important subject, to fully understand the impact of ‘conversion therapy’ and the need for a specific criminal offence”.

The announcement came after strong criticism from MPs and LGBT+ activists.

LGBT charity Gendered Intelligence tweeted: “Just the Government asking if torture against gender minorities should be made illegal or if it should just continue as is, nothing to see here.”

Transgender activist Munroe Bergdorf tweeted: This is outrageous. Conversion Therapy is not a debate. Shut it down.”

Shadow Foreign Office and Development minister Stephen Doughty said he has “raised concerns” about the “inappropriate and insensitive” tweet with the House of Commons petitions committee.

Labour MP Stella Creasy added: “What would it mean to me if we made sure torture was illegal in our own country that we challenge in others? well that we’re doing our job for one…..ashamed this is even a question we have to ask tbh…”

Conversion therapy, which aims to change a person’s sexuality, is currently legal in the UK.

But MPs and activists have stepped up calls in recent months to ban it and the petition referenced in the original tweet passed 100,000 signatures – meaning Parliament is considering it for a debate.