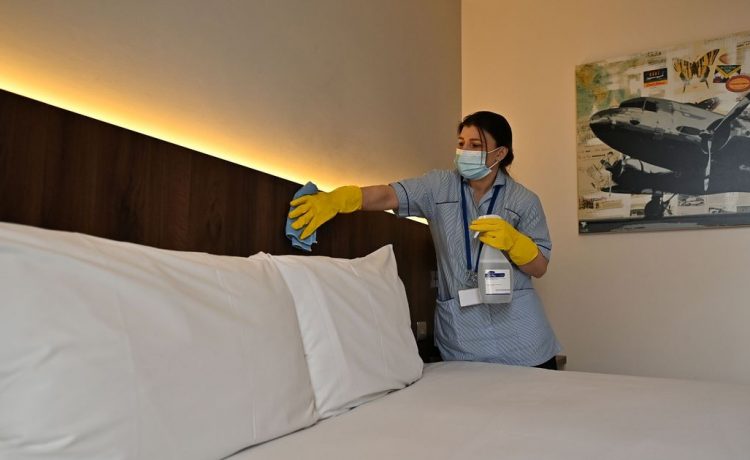 The first guests will check into government quarantine hotels on Monday amid warnings of five-hour airport queues and “red list” country arrivals being allowed to mix with other passengers.

There are reportedly no protocols in place to stop passengers travelling to the UK from the 33 “red list” countries mixing with other travellers on planes and in airports.

This has sparked fears passengers might pass on different strains of Covid to others before they even reach the hotel to start their 10-day quarantine.

Heathrow, Britain’s busiest airport, warned yesterday that queues at passport control have been up to five hours long recently.

Officials blamed a shortage of Border Force staff, saying that
many desks were left empty.

The airport said that the situation was “totally unacceptable” and warned that some arriving flights might have to be suspended if the backlog could not be cleared more quickly.

From today, UK nationals or residents returning to England from 33 “red list” countries – comprised of hotspots with Covid-19 variants in circulation – will be required to quarantine in hotels for 10 days.

Anyone who has been in a high-risk destination will have to enter England through a designated port and have pre-booked a quarantine package to stay at one of the Government’s managed quarantine facilities.

The Government has struck deals with 16 hotels so far, providing 4,963 rooms, with a further 58,000 rooms currently on standby, the Department of Health and Social Care (DHSC) said.

Travellers arriving from Monday onwards that have not visited a red list country must still quarantine for 10 days at home and complete two mandatory Covid-19 tests on the second and eighth day after arriving.

Health Secretary Matt Hancock said: “As this deadly virus evolves, so must our defences. We have already taken tough action to limit the spread, protect people and save lives.

“With the emergence of new variants, we must go further. The rules coming into force today will bolster the quarantine system and provide another layer of security against new variants at the border.”

People must quarantine in the hotel room but exceptions allowing them to leave include the need for urgent medical assistance, to exercise or attend the funeral of a close family member.

The regulations state that leaving for these exceptional reasons should only happen if the person “has been given prior permission by a person authorised by the secretary of state for this purpose”.

People may only arrive into Heathrow Airport, Gatwick Airport, London City Airport, Birmingham Airport, Farnborough Airport or any military airfield or port, according to the legislation.

Passengers arriving into England face fines of up to £10,000 for failing to quarantine, and those who lie on their passenger locator forms face up to 10 years in jail, Mr Hancock announced earlier this week.

The cost for a quarantine hotel stay is £1,750 for a single adult.

On Saturday, Heathrow Airport said “significant gaps” remained in the hotel quarantine plan and a spokeswoman said it is yet to receive the “necessary reassurances” from the Government.

On Sunday night, the Heathrow spokeswoman said: “We have been working hard with the Government to support the successful implementation of the managed quarantine policy from Monday.

“Good progress has been made to address a number of issues. Queues at the border in recent days have been almost five hours and this is totally unacceptable.

“Border Force today have given us assurance that they will have resource and effective processes at the border to avoid compromising the safety of passengers and those working at the airport, which could necessitate the suspension of some arriving flights.”

One of the Heathrow Airport hotels taking part in the scheme is Novotel London Heathrow T1 T2 T3.

The hotel was charging £65 for members of the public staying on Sunday night, while travellers using it to quarantine from Monday must pay £1,750 for 10 days.

The PA news agency understands that the Renaissance London Heathrow Hotel is also participating in the programme.

Foreign Secretary Dominic Raab dismissed the idea of a “blanket ban” on travel into the UK ahead of the hotel quarantine plan kicking in.

Mr Raab was asked if it is time for a blanket ban due to the South Africa variant of Covid-19 being detected in Austria for example which is not on the Government’s red list.

READ  Schools may have to close to older pupils to curb coronavirus, scientist warns

He told Sophy Ridge On Sunday on Sky News: “I’m not sure that’s proportionate, and of course having blanket bans on any, for example, air travel into the UK would be very difficult for the supply chains, things like freight.”

Mr Raab said the data is assessed very carefully and they want to make sure the measures are “as targeted as possible”.

He said: “We think we’ve got the right balance – robust measures, but targeted measures.”