Hotel of the week: Pikes, Ibiza 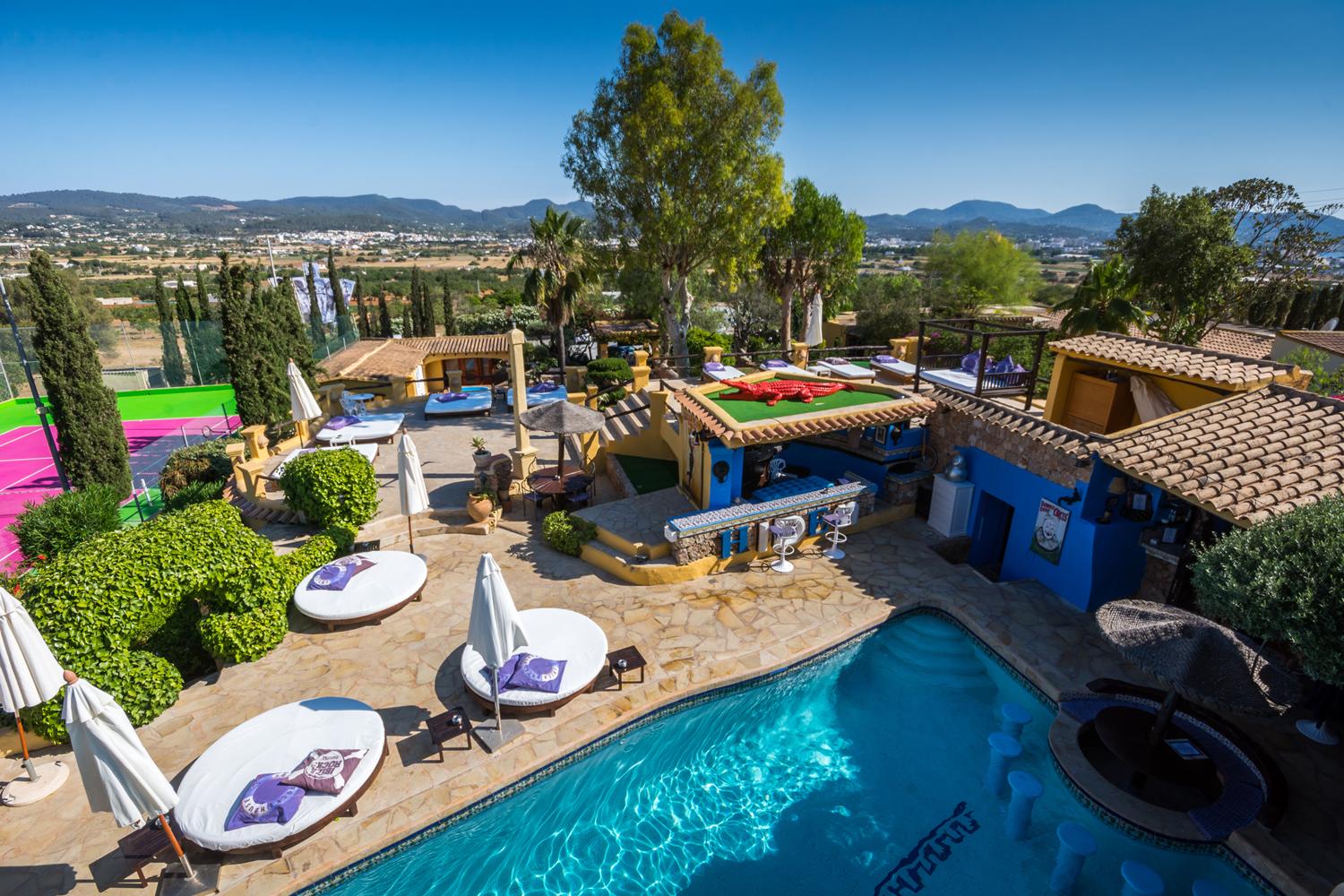 It’s often said that Ibiza has a certain kind of magic and nowhere is this more true than at Pikes Hotel.

Nestled in the Ibizan hills, the 26 room boutique hotel is steeped in rock n roll history. The iconic institution began when an abandoned 500-year-old finca was bought in the 1970s by the late Tony Pike, who transformed the ruined farmhouse into the colourful haven it is today.

After rising to prominence in the eighties as the filming location for Wham’s Club Tropicana – you can even spot a mustachioed, bare chested Pike at the start of the video – the hotel went on to become a Balearic sanctuary for the music and film elite. It counts George Michael and Grace Jones as past residents – Freddie Mercury threw his now legendary 41st birthday party here.

Since 2011, the luxury hotel has been owned by Dawn Hindle of Ibiza Rocks – who as one of the founding members of the revolutionary club night Manumission is an Ibiza legend in her own right.

It would be easy for Pikes to rest on its star studded laurels, but the hotel is not content to slide into the corridors of rock history with its famous former residents. Instead, Hindle is ramping up the cultural offering with a range of events – including the three day annual Pikes Literary Festival headlined by critically acclaimed author Irvine Welsh and Libertines front-man Carl Barat which takes place September 10-12. Add to that the launch of a series of Pikes Podcasts starting September 2 and intimate acoustic gigs – Miles Kane played while we stayed in August. That’s before you even get to the line-up at Freddie’s, the onsite club with regulars such as DJ Harvey, Crazy P and Artwork.

In the tranquil countryside, less than two miles from the Brits-on-tour hotspot of San Antonio and 10 miles from Ibiza Town.

Finca Can Marti is a heavenly hideaway in rural Ibiza


From here it’s easy to discover the local restaurants and beaches, which are a short taxi ride away. Carnivores should pay a visit to nearby Sa Capella. Set in a converted church, the Spanish restaurant serves up delicious steak and fresh fish cooked at your table, plus a mean homemade Hierbas.

An eclectic mixture of British kitsch and traditional Ibicencan comfort. To reach reception, enter through gardens reminiscent of a hallucinogenic dream – dotted with rainbow coloured mushrooms, tiny chairs that look about the right size for the hotel’s resident cats and low, fairy light strewn archways. And that’s before you discover the supersized roller skate (positioned in place of an umpire’s chair on the neon pink tennis court, obviously.)


The walls leading to Pikes’ famous pool are painted with quirky murals by British artist Rory Dobner and dotted with plastic sheep. Around the turquoise swimming pool expect to find large double sunbeds strewn with comfortable cushions and a pool bar which serves a good range of cocktails, fresh juices and other drinks, plus a great lunch menu – be sure to try the Pikes burger.

Overall, the decor inside has a whimsical feel. There are 26 comfortable and spacious rooms and junior suites as well as a vast apartment ‘La Residencia’. Each has its own individual style – exposed beams, vintage record players, Cambridge Audio speakers, a hobbit style round front door for one room and a sunken bathtub inside another. Walls are hung with photographic images by Victor Spinelli, Jerome Ferriere and other artists.

Bathrooms are spacious and cool, some with double sinks, large bathtubs and walk-in showers, plus fluffy white Pikes robes and towels.

Pikes’ restaurant, Room 39, is a destination for Ibiza foodies. Locally sourced produce is a focus, with a local farmer tending ‘Pikes Patch’ to provide the kitchen with herbs, tomatoes, melons and other locally grown seasonal vegetables.

After starting your supper the way every meal on the White Island should begin – bread with lashings of aioli – check out the pleasingly short menu. The food is modern British with a twist. Hindle recommended the fresh tomato salad with Ibiza mozzarella, basil and smoked balsamic and the cod loin with soft buttered leeks and delicately curried mussels, which we dutifully ordered and were glad we did. Desserts are delicious and crafted by Pikes’ pastry chef, we opted for an indulgent chocolate orange creation.

Pikes is well known as a Sunday lunch destination. Start with poolside Bloody Mary’s before heading to Room 39 for a traditional English-style roast with all the trimmings. And this year, another British institution was introduced – afternoon tea. Expect cocktails, or Cava, of course, with quintessentially English pastries, scones with jam and cream and tiny sandwiches.

Breakfast is also served in Room 39, or in your room if preferred, and offers a tasty way to recover from the night before. Options range from a full English or pan con tomate with serrano ham, to classic hotel-style continental breakfast or perfectly poached eggs on avocado toast.

If you’re feeling sporty, there is a tennis court, whirlpool tub, and a variety of massages, fitness and yoga classes offered in the ‘Rockovery’ tent day to night.

The happy staff are excellent and make the stay at Pikes feel like you’re part of one big family. Undoubtedly, the hotel just wouldn’t have the edge that it does without them. They are attentive without being overbearing and nothing is too much trouble.

We stayed in room 24, which overlooks the tennis court and opens straight out onto the pool, a mere 10 steps to the nearest poolside sun lounger.

A sanctuary for couples or small groups with a playful appetite for hedonism. Pikes is an Ibiza experience not to be forgotten – as the mural by the exit states: “You can check in, but you can never check out”.

Room rates start at 149 Euros for a double room in low season: Pikes Ibiza opens April 27 until end of October 2019.

Hotel of the week

READ  Couple create brilliant inception photos by posing together each Valentine’s Day
Share on FacebookShare on TwitterShare on PinterestShare on Reddit
newsgrooveAugust 30, 2019