Hot tubs, air fryers, houses: are we starting to regret our pandemic purchases?

Oh really? You bought a exercise bike? Of course I did. My gym was shutting and I didn’t want to gain weight under lockdown, so I splashed out.

Did it work? Of course not. I’ve used it once since March 2020, before returning to the more traditional lockdown activity of eating biscuits and watching Tiger King. But at least I’m not alone.

You’re not? Not at all. According to a newly published How We Live report, which surveyed more than 4,000 adults, nine out of 10 Britons bought “treats” such as clothes, air fryers and entertainment equipment to get them through the hell of lockdown, and now they’re riddled with guilt.

Why? Apparently, 8% of buyers said those treats were never used. Another 9% no longer use them, and 11% use them less than expected.

It’s so wasteful, isn’t it? Hang on a second. This was a global pandemic the likes of which we haven’t seen for a century. We were plunged into completely unknown territory. If people’s coping mechanism was to buy an air fryer they had little use for, it’s easy enough to forgive them.

It wasn’t just air fryers though, was it? Well, people did go wild for hot tubs too (one adult in 20 of those surveyed bought one). More than a third of those who did now regret the decision. So at least I can relax in the knowledge that that was the stupidest lockdown purchase. Well, that and people who rushed into buying entire houses.

People regret buying houses? Yes! The trend was for lots of itchy city dwellers to sell up and move to the countryside because the extra space gave them more room to work from home.

And now they have to go back to their office, they’re realising that they’re saddled with a longer commute and reduced local amenities? That and a house so old it creaks in the night like a pirate ship, not to mention a Deliveroo range that consists of a one-star kebab place half an hour away. An Aviva survey published in July found that half the people who have bought a home since March 2020 have regretted the amount they paid for it. Only one in eight who bought before early 2017 felt the same.

No wonder they feel bad. But, hey, people need to go easy on themselves. Whatever gets you through the night, remember?

And for you that’s an expensive mint-condition exercise bike. While for others it’s a broken-down home in the middle of nowhere.

Do say: “Our society makes it too easy to buy expensive items on impulse.” 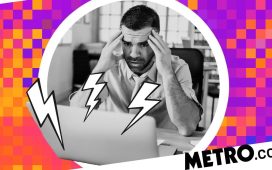