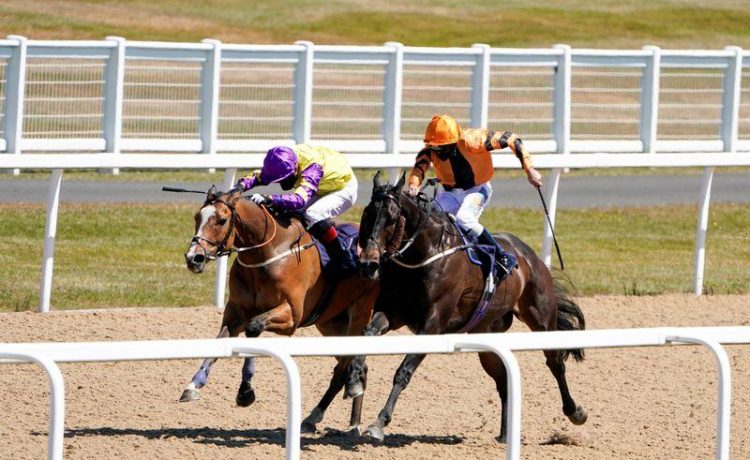 LONDON (Reuters) – The thrum of hooves pounding the ground returned to Newcastle racecourse on Monday as competitive sport resumed in England after the shutdown because of the COVID-19 pandemic.

In normal times the 1pm at Newcastle would barely register beyond the Racing Post and the country’s betting shops.

But as Zodiakos, a 22-1 shot ridden by Jimmy Sullivan, galloped past the winning post on the all-weather circuit, it represented a big leap forward in the nation’s quest to return to some kind of sporting normality.

“Everything has gone well so far. We’ve left no stone unturned. We are the first live sport on so there is incredible pressure. But there is enormous privilege too,” Martin Cruddace, CEO of ARC racing who own the course, said of the 10-race card, featuring 45 jockeys and 120 horses.

“If you had put a heart-rate monitor on me before the first race it might have been in the red zone. It’s calmed down now.”

With Premier League soccer gearing up for a return on June 17, all eyes were on Newcastle after the government on Saturday gave the green light for a return of competitive sport in England, provided strict criteria, including no spectators and a raft of health measures, were met.

No horse-racing has taken place for 76 days and the resumption was in a tightly-controlled environment.

READ  To athletes' relief, Tokyo 2020 postponement decision due any day

Access to the course was limited and everyone present had to have completed a medical questionnaire, have a temperature check on arrival and stick to strict social-distancing rules.

“In this heat today, riding in the mask, it is very warm and after pulling up I pulled it down a little just to get a few breaths in,” Sullivan said.

British horse-racing is estimated to contribute around 4 billion pounds ($4.96 billion) into the economy, with 20,000 people involved directly or indirectly in the industry.

While sports fans will hope the return of racing at Newcastle will pave the way for more sports to resume, the bookmakers are also breathing a sigh of relief.

“The Newcastle markets have been really lively this morning with volume and turnover well ahead of what you could expect for Newcastle on a Monday afternoon,” a spokesman for Betfair said.

As other sports prepare for a return, horse-racing will take centre stage this week with other courses opening up and this weekend Newmarket hosting the prestigious 2,000 Guineas.

Wigan's administration could be 'tip of a large iceberg' across EFL