Horror films stimulate regions of the brain associated with survival

Scary movies manipulate activity in the brain to boost excitement, according to a new study.

Participants in the study, conducted at the Human Emotion Systems Laboratory in Turku, showed the brain continuously anticipates action in response to threats in two different ways.

Regions of the brain that are involved in visual and auditory perception are triggered during sudden jumpy moments – enabling a rapid evolutionary response to mitigate danger.

Certain regions were also found to be increasingly active during scenes of impending dread as anxiety slowly increased, providing the brain with ‘sustained alertness’.

The largest fear response came from the unseen or implied, rather than what they actually saw on the screen. 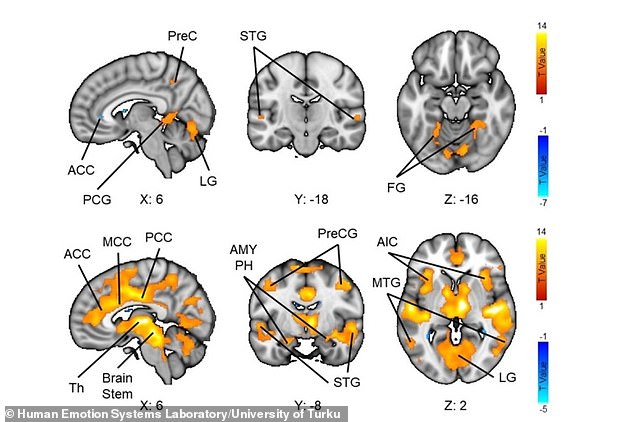 ‘Horror movies exploit this expertly to enhance our excitement,’ said Dr Matthew Hudson, a psychologist at the University of Turku in Finland.

Both films were included in the researchers’ initial survey of the top 100 scary movies – a list that also included A Nightmare on Elm Street, Poltergeist, 28 Days Later, Rosemary’s Baby and the 1932 classic Freaks – from online movie databases.

An independent sample of 216 participants completed a survey asking if they had seen the movies and, if so, rated them on scariness and quality.

WHAT WERE THE TOP 10 SCARY MOVIES?

The participants also reported how often they watched horror movies or movies in general, how scary they considered different types of horror and the most common emotions experienced while viewing horror movies.

From this survey data, the research team whittled down the top 10, of which The Conjuring 2 and Insidious were chosen for the experiment.

These two films were chosen because they were highly rated for scariness and quality, relatively few people had seen them and each film had a high number of ‘abrupt threat onset’ moments, known as ‘jump scares’.

‘Viewing horror movies in the MRI is quite an engaging experience, as you are all alone in the small tube and cannot see out, and the movie is shown via goggles just in the front of your eyes,’ Dr Hudson said.

‘This allowed modelling of brain responses to both acute and sustained fear.’

Participants also rated their fear throughout the movies, and the ‘jump scare’ events in the movies were annotated. 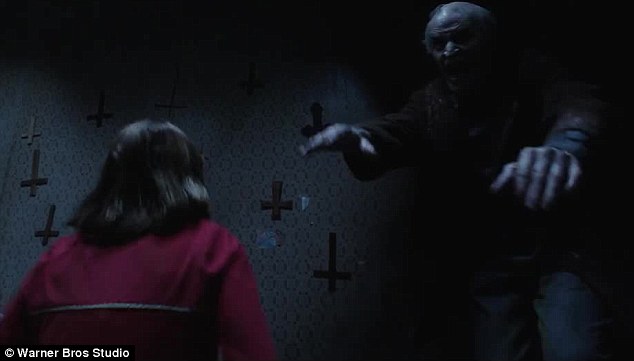 During those times when anxiety was slowly increasing, regions of the brain involved in visual and auditory perception became more active, as a way of seek threatening cues in our surrounding environment.

Meanwhile, after a sudden shock or jump scare, brain activity was more evident in regions involved in emotion processing, threat evaluation and decision-making.

‘This data suggests that there is dynamic engagement of different survival circuits in the brain depending on the proximity of the fear.’

While action blockbusters and heart-warming rom coms have heroes face at least a mild form of threat to their safety or happiness to drive the story, horror films up the ante by including superhuman or supernatural threats that cannot be reasoned with.

Humans are fascinated by what scares us, be it sky-diving, roller-coasters, or true-crime documentaries – provided these threats are kept at a safe distance.

Horror movies are no different, said the researchers, who published their research in NeuroImage.

Our brains are continuously anticipating and preparing us for action in response to threat, and horror movies exploit this expertly to enhance our excitement.

‘The creeping foreboding dread that occurs when one feels that something isn’t quite right and the instinctive response we have to the sudden appearance of a monster that make us jump out of our skin,’ said Principal investigator Professor Lauri Nummenmaa.

The horror movie survey is still open to the public for further research purposes.

WHAT IS A FUNCTIONAL MAGNETIC RESONANCE IMAGING (FMRI) SCAN?

Functional magnetic resonance imaging (fMRI) is one of the most recently developed forms of neuroimaging.

It measures the metabolic changes that occur within the brain, such as changes in blood flow.

Medical professionals may use fMRI to detect abnormalities within the brain that cannot be found with other imaging techniques, measure the effects of stroke or disease, or guide brain treatment.

It can also be used to examine the brain’s anatomy and determine which parts of the brain are handling critical functions.

A magnetic resonance imaging (MRI) scan uses a magnetic field rather than X-rays to take pictures of body.

The MRI scanner is a hollow machine with a tube running horizontally through its middle.

You lie on a bed that slides into the tube of the scanner.

Equipment used in fMRI scans uses the same technology, but is more compact and lightweight.

The main difference between a normal MRI scan and a fMRI scan is the results that can be obtained.

Whereas a normal MRI scan gives pictures of the structure of the brain, a functional MRI scan shows which parts of the brain are activated when certain tasks are carried out.

This includes language, memory and movement.

US pushes ahead with new rules for Chinese firms