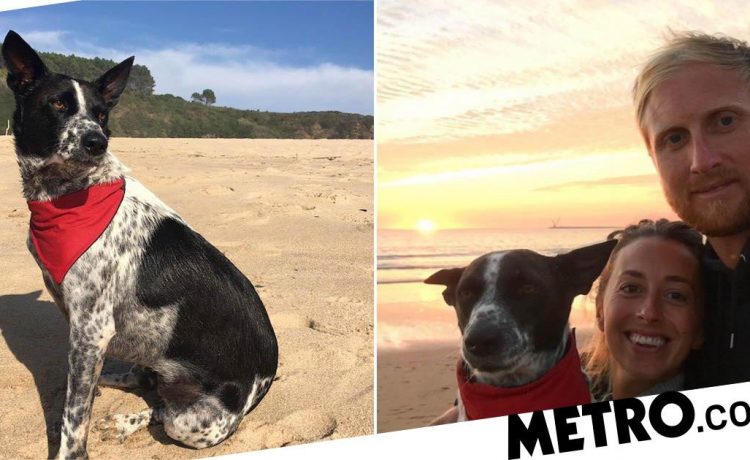 A determined dog escaped day care and made the journey back home to her worried owners all by herself.

Owners Phil Blakeway and Charlotte Webster, from Drayton Bassett, near
Tamworth, were crushed when they were told Daisy had absconded from doggy day care.

She’d been taken there while carpenter Phil and doctor Charlotte needed to go to work.

Charlotte, 29, said: ‘I felt immediate dread once I had the call to say she was missing and hadn’t been seen.

‘She had only ever been driven to the area, and it is more than seven miles from home.

‘Between our house and where she went missing lies the M42, the M6 Toll and numerous busy trucking roads which supply the north of Birmingham.’

A social media post explaining that Daisy was missing was shared thousands of times and 40 people ended up helping to look for her.

Even so, there were no definite sightings of her for several hours.

At one point, she was seen near Kingsbury Water Park and the Belfry Hotel, which means she had to have crossed the two busy motorways and several A roads on the way.

At 1am, 18 hours after the pooch had done a runner, Charlotte and Phil headed home only to find Daisy there waiting for them.

Charlotte explained: ‘As we turned onto the drive my headlights shone onto the porch we had left open and there was a very sheepish and tired looking Daisy, dutifully looking out for our return.

‘I could see she was whimpering and her tail was going a million miles an hour when she recognised the car.

‘I was so shocked. Never in a million years did I think she would be able to find her way home.

‘We had lots of cuddles, and there was not a dry eye between us.’

The couple left a scent trail of their clothes and Daisy’s favourite treats and believe it helped her navigate the last few miles home.

Daisy is no stranger to long journeys, since Phil and Charlotte originally found Daisy as a sickly pup on the streets of Sri Lanka.

She had to travel thousands of miles on to Heathrow Airport in 2018 to be reunited with the pair after they found her in 2017.

Phil, 32, knew they had to help Daisy after she’d been abandoned along with her brother and sister.

Even though they were all fed by Phil, sadly the other two pups died of a suspected case of tick-borne disease babesia.

Phil talked to UK registered charity Animal SOS Sri Lanka, and founder Kim Cooling agreed to take Daisy in and nurse her back to health until she was ready to fly to the UK.

Charlotte said: ‘Daisy had a terrible start in life, being dumped and abandoned as a very young pup, and we have always tried to go above and beyond to pamper her and make sure her life is filled with all the best things to make up for that.

‘I kept thinking after being abandoned, surviving the streets of Sri Lanka, surviving babesia and recovering from death’s door, we were going to lose her on the roads near where we live.

Daisy’s former caregiver Kim, who lives in South Woodford, agreed, saying: ‘Having lived with and after helping street dogs for many years, they never cease to amaze me with their intelligence, resilience and loyalty.

‘I had a feeling Daisy would somehow find her way back to Phil and Charlotte against such odds.

‘Once rescued and given a second chance in life, these dogs are incredibly faithful and bond with their owners so intensively.

‘It was that love, that bond and that intelligence that inspired Daisy to get back to her loved ones. She is an amazing dog’


MORE : A socially-distanced dog show is (hopefully) coming to the UK this July


MORE : How to not get caught out by so-called ‘dog funds’

READ  Scientists discover why tarantulas come in vivid blues and greens
Share on FacebookShare on TwitterShare on PinterestShare on Reddit
newsgrooveFebruary 23, 2021