The Geordie Shore star, 27, stripped down to her underwear, matching her bra with a striking new ‘do.

She finished her styling with Barbie pink eyeshadow and lipstick, and she stood gazing at a CBD box in her hand.

Holly wrote how she struggles to sleep and suffers from anxiety in the ad to promote the flavoured CBD drops.

She wrote: “I take the drops daily to help with anxiety/sleep .. I don’t cope well in stressful situations and when I’m super busy and everything starts to get on top of me this allows me to take back control.”

Last week Holly hit out at Kerry Katona after she called her pal Charlotte Crosby a “cross-eyed fish”.

She jumped to her defence and demanded an apology following Kerry’s criticism of Charlotte’s plastic surgery.

A furious Holly took to Twitter to slam the former Atomic Kitten singer, saying: “What the hell is this!!? You are a mother to daughters!!! How would you feel if someone said this about your girls @KerryKatona7 I think you need to apologise.”

It was in reference to Kerry’s new! column, where she spoke about Charlotte’s comments on Australian I’m A Celebrity concerning her lips.

Kerry wrote: “Charlotte Crosby, currently appearing on the Australian I’m A Celeb, said her lips look like a ‘baboon’s arse’ – she’s not wrong.

“Charlotte’s great entertainment, but I wish she’d stop messing with her face as it looks fragile. She’s obviously got hang-ups about her appearance and that’s sad, but please stop!

“Her face looks like it’s got stuck between two lift doors – she looks a bit like a cross-eyed fish.

“I’m not trying to be mean – she knows what she looks like and she owns it – but she looked so much better before her surgery. Maybe therapy is the answer instead of more procedures.”

Kerry went on to issue an apology on social media, insisting her comments were tongue in cheek and she didn’t intend to offend.

Meanwhile Charlotte has opened up to her fellow campmates about her looks.

She told how she is branded “Michael Jackson” by online trolls because of her looks.

The star said: “I went on the red carpet, I honestly felt like I looked a million dollars.

“I had this lovely dress made, my hair and make-up was all done and I looked in the mirror and I was like, ‘God, I think I actually feel like I fit in.’

“I uploaded a photo the next day and just men were going in on us, like, ‘Ugh Pete Burns, blah blah blah, disgusting, Michael Jackson’. I get called Michael Jackson all the time. People are just ruthless.”

CRACKs IN THE ICE

REBEL WITH A CAUSE

‘SHE WAS LOOKING AT IT’

But the reality star admitted she shrugs off the negative comments: “If I see trolling on my pictures, I’m just like ‘say something new’ because it’s nothing I haven’t heard before.

“Because it really doesn’t matter what Paul Brown from 75 Smith Street thinks about that, because he’s probably a bit of a t**t himself.”

Caroline Flack death: Will people now 'be kind' in the media and online? 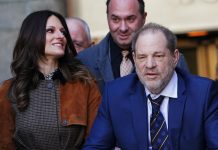 Who was Andrew Weatherall and how did the Primal Scream producer die?