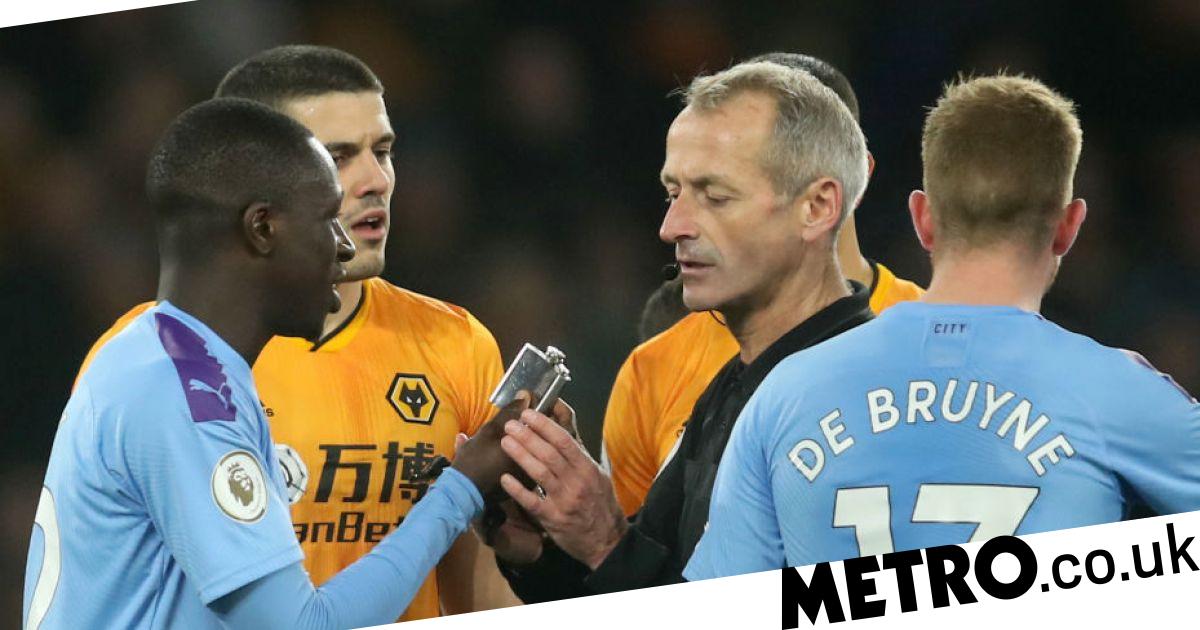 A hip flask was thrown at Raheem Sterling while he celebrated a goal for Manchester City against Wolves at Molineux on Friday night.

The Premier League champions were awarded a penalty after VAR ruled Leander Dendoncker had brought down Riyad Mahrez in the penalty area.

Sterling missed the initial spot-kick, but VAR again stepped in as Wolves captain Conor Coady had encroached on the penalty area and cleared the ball after Rui Patricio had saved it.

Again Sterling stepped forward and again Patricio saved his effort, but this time the England international tapped in the rebound into an empty net.

As the City star ran off to celebrate, objects were thrown onto the pitch, including a hip flask, which appeared to be made of metal.

Midfielder Rodri shouted at fans after seeing the object thrown, then Benjamin Mendy handed it to referee Martin Atkinson and there were announcements on the PA system at Molineux for fans to stop throwing objects.

Amazon Prime pundit Michael Owen said of the incident: ‘This was unsavoury afterwards, not acceptable, we’ve seen it in recent weeks, no excuse whatsoever, unacceptable.’

It was an incident-filled half as Manchester City goalkeeper Ederson had been sent off 10 minutes before the penalty was given for his side.

The Brazilian rushed out of his goal just 12 minutes into the game and took out the onrushing Diogo Jota to earn himself a straight red.

Sergio Aguero was taken off as a result, to be replaced by substitute keeper Claudio Bravo for only his second Premier League appearance of the season.

City took a 2-0 lead thanks to Sterling scoring a second 50 minutes in, but Wolves piled on the pressure from there on in and the numerical advantage told.

Adama Traore gave the home side hope, before Raul Jimenez equalised with eight minutes left and Matt Doherty scored the winner in the 89th minute to give Wolves a famous win.