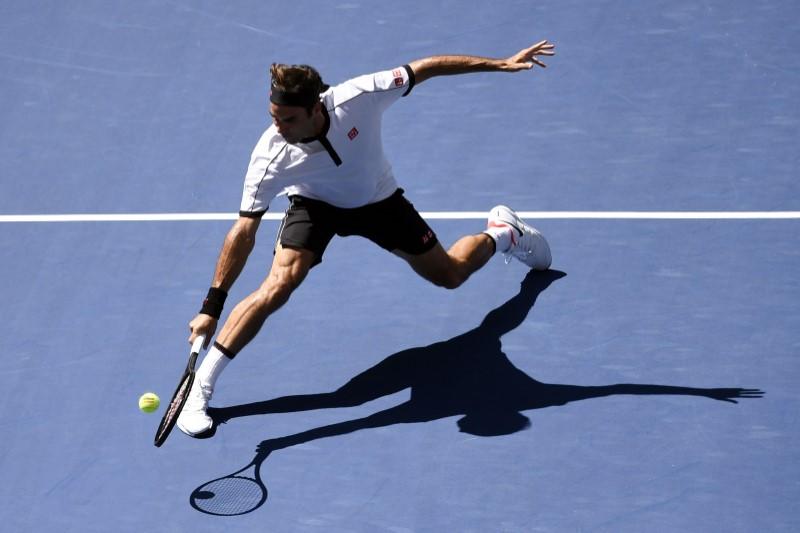 (Reuters) – Roger Federer and Novak Djokovic were at their dominant best at the U.S. Open on Friday as both cruised into the round of 16 with straight-sets victories.

After making sluggish starts in his previous two matches, five-times winner Federer took his game up a notch to power past Briton Dan Evans 6-2 6-2 6-1 under the open roof at Arthur Ashe Stadium on a sunny day.

The 38-year-old fired 48 winners and 10 aces to shake off any remaining rust since his Wimbledon final defeat by Djokovic earlier this year and faces Belgium’s David Goffin next.

“At the end of the day what matters the most for me is that I am in the third round after those two sort of slow starts,” Federer told reporters.

“I gave myself another opportunity to do better, and I did. You almost tend to forget what happened and you move forward.”

The Swiss was joined in the next round by defending champion Djokovic who shrugged off a left shoulder injury that hampered him in his last match and beat American Denis Kudla 6-3 6-4 6-2.

Up next for the Serbian is former champion Stan Wawrinka who fought off a determined Paolo Lorenzi to secure a 6-4 7-6(9) 7-6(4) victory.

“I think I had a lot of intensity today which was really good for me,” Williams said. “I don’t know how I would grade my performance. Just gotta keep playing and believing.”

Highlights of the fifth day at the U.S. Open, the final Grand Slam tournament of the year, on Friday (times GMT):

Defending champion Novak Djokovic showed no signs of the left shoulder injury that dogged him in his previous match as he swatted aside unseeded American Denis Kudla 6-3 6-4 6-2 to reach the fourth round.

Wawrinka into last 16 after hard-fought win over Lorenzi

Serena cruises by Muchova into fourth round

0020 SVITOLINA TOO SLICK FOR COMPATRIOT YASTREMSKA

Elina Svitolina beat fellow Ukrainian Dayana Yastremska 6-2 6-0 to reach the last 16 for the third year in a row.

The fifth seed converted five of the six break point chances she carved out, wrapping up the one-sided affair in 53 minutes.

Former champion Stan Wawrinka beat Italy’s Paolo Lorenzi 6-4 7-6(9) 7-6(4) to reach the last 16 for the first time since he won the title three years ago.

The 34-year-old, who could face Novak Djokovic if the top seed beats Denis Kudla later on Friday, served 24 aces and hit 64 winners but also made 50 unforced errors.

The 18th seed served five aces and cracked 26 winners to set up a meeting with Australian second seed Ash Barty, who she has lost to in straight sets in both their previous career meetings.

Belgian 15th David Goffin beat Spain’s Pablo Carreno Busta 7-6(5) 7-6(9) 7-5 to set up a meeting with third seed Roger Federer in the fourth round.

Both players struggled to take their chances, with Carreno Busta converting one of nine break point opportunities and Goffin two of 10.

Briton Dan Evan said having to play two matches in quick succession was partly to blame for his defeat by Roger Federer.

The Briton, whose second round match was postponed by a day due to rain, did not get off court till Thursday evening and he was first up on Arthur Ashe Stadium against Federer.

The Swiss did not take kindly to Evans’ comments.

“I’m sick and tired of it, that apparently I call the shots. The tournament and the TV stations do. We can give our opinion. That’s what we do. But I’m still going to walk out even if they schedule me at four in the morning.”

Briton Johanna Konta was in cruise control against Zhang Shuai, beating the Chinese 6-2 6-3 to advance.

The 16th seed crushed 34 winners to Zhang’s nine and also sent down four aces as she breezed into the last 16.

Eighth seed Serena Williams reached the fourth round of the U.S. Open for the 18th time in her career after swatting aside Karolina Muchova 6-3 6-2.

The American, who has won her home major six times, converted five of eight break point chances against the Czech and will face Croatia’s Petra Martic in the next round.

1910 BARTY PARTY RUMBLES INTO ROUND FOUR

The Australian sent down 11 aces as she sealed her second consecutive straight sets victory at this year’s tournament, with her only dropped set coming against Kazakhstan’s Zarina Diyas in the opening round.

Nishikori made twice as many unforced errors as the Australian, who won nearly half his total points against the Japanese’s serve and will face either Grigor Dimitrov or Poland’s Kamil Majchrzak in the last 16.

1735 FEDERER THROUGH WITHOUT DROPPING A SET

After dropping the opening set in his first two matches at the U.S. Open, Roger Federer made quick work of Briton Dan Evans with a comfortable 6-2 6-2 6-1 victory, wrapping up the match in 79 minutes.

Evans was broken seven times by five-times champion Federer, who fired 10 aces and 48 winners at Arthur Ashe Stadium to cruise into the fourth round.

Czech third seed Karolina Pliskova was tested on a hot day by Tunisia’s Ons Jabeur before triumphing 6-1 4-6 6-4 in a match that lasted two hours and eight minutes.

Jabeur took a medical time out midway through the match to have a knee injury looked at before storming back to claim the second set but Pliskova held on in the final set to move into the fourth round, converting seven break points in the match.

Play began on Friday under bright sunshine with the temperature hovering around 25 degrees Celsius (77°F) and a forecast high of 31C. However, rain is expected later in the day.