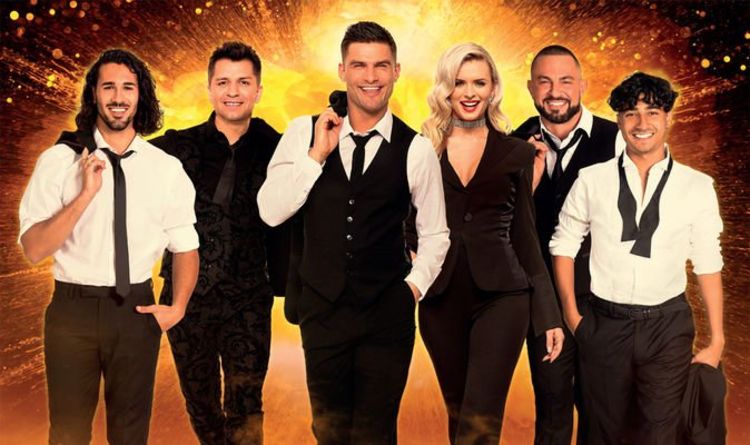 What better way to celebrate the reopening of theatres than a spangly night of fun with Aljaz and his friends? The Strictly star debuted this show in 2019 and has rounded up a new gang this year with current Italian stallion (don’t tell Giovanni) Graziano di Prima, as well as familiar faces from the past, Robin Windsor and Pasha Kovalev. Ridiculously charming (and possibly robbed in 2019) Strictly finalist Karim Zeroual is on hosting duties with plenty of opportunities to show off his own fancy footwork, and Strictly blonde bombshell Nadiya Bychkova is represently the girls.

There were just as many dance divas in the audience on opening night, with Aljaz’s fellow Strictly star and wife Janette Manrara joined by the show’s own cheering squad of current and former pros: AJ Pritchard, Karen Hauer, Oti Mabuse, Katya Jones, Johnannes Radebe and Kristina Rihanoff.

Strictly contestants Emma Weymouth (Marchioness of Bath) and Colin Jackson cheered from the stalls while former judge Darcey Bussell cast her expert eye over everything – and proudly whooped louder than anyone else throughout.

The show itself is a dizzying whirl of sequins and spectacularly fast footwork, mainly soundtracked by thumping club beats, that is the perfect antidote to the past 16 months.

It’s a testament to choreographer Gareth Walker that he has been able to pull together a fully-staged show which is utterly reliant on close contact partner work and group numbers, with all the current limitations in place.

Throughout the adrenalised night, numerous high energy set-pieces whizz by but I personally enjoyed some of the individual moments best.

Luxuriously-maned Graziano not only deserves extra credit for his extravagant hairography, he also pulled off the night’s most impressive sequence of overhead lifts in spectacular showboating style.

During a waltz, Aljaz gave a gorgeous little wave to Janette on the chorus of Michael Buble’s It Had To Be You, followed by a typically cheeky bum wiggle.

There is definitely something for everyone, with Aljaz purring ‘hello ladies” at the start, followed by Robin growling, “Hello boys.” He also spent one segment in a tiny towel, while Graziano unleashed a seriously sexy shirtless individual number that had his own cheering squad in the balcony going crazy.

Karim is a delightful addition to the line-up and has irresistible charm to go with his own impressive dancefloor stylings, breaking out some nifty tricks on a couple of the street dance segments.

The show is very loosely built around a competition between the four male dancers, who battle it out in Jive, Salsa, Ballroom and Rumba set pieces. The crowd gets to cheer for their favourite but then (a misstep, I feel) the winner of each section is rather arbitrarily awarded anyway, so that they win one each. It needs rethinking.

Much more successful is the excellent standard of the backing dancers and the two chaps in particular, Mick Scott and George Michaelides. The latter is still only 17 but shone throughout and then lead the encore dance with such consummate flair and presence that a bright future surely awaits.

HERE COME THE BOYS at The London Palladium to June 9: CLICK HERE TO BOOK