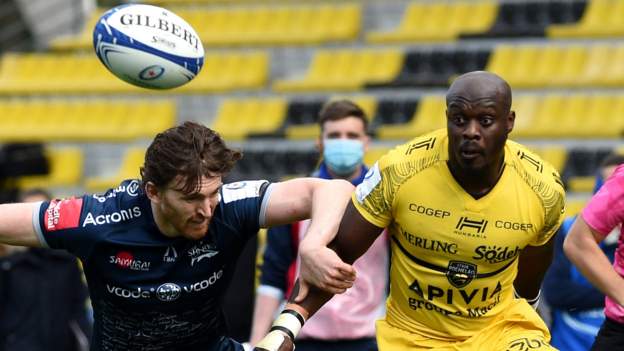 Sale were outclassed by La Rochelle, who claimed a place in the Champions Cup semi-finals for the first time with a 45-21 victory.

Sam James’ converted try just before the break saw the Sharks trail by just two points, but the hosts stretched away in the second half.

Raymond Rhule ran in two fine tries, and also set up Geoffrey Doumayrou to cross for the first of his own pair.

Sale’s Byron McGuigan touched down for a late consolation try.

Sale started their first quarter-final in this competition in 15 years well, briefly leading early on when fly half AJ MacGinty landed a penalty that was quickly cancelled out by his opposite number Ihaia West.

The pair traded penalties again before West’s clever chip was caught and fed on to Gregory Alldritt to allow the flanker to go over near the corner.

West’s next penalty went over despite hitting the post, but after MacGinty’s third penalty of the half the hosts extended their lead, Dillyn Leyds sprinting clear after taking the ball off the toes of Sale’s Faf de Klerk.

The Sharks stayed in the game when centre James cut in to score his side’s first converted try, and they trailed only 18-16 at half-time.

The two-point margin was as close as Sale got, however, with Rhule dummying his way through for his first try soon after the game resumed.

The Ghana-born South Africa international then took advantage when Sale full back Simon Hammersley misjudged a bouncing kick through, Rhule diving on to the ball over the line for another try converted by West.

‘It went wrong against their set-piece power’ – what they said

Sale Sharks head coach Alex Sanderson said: “I thought we were at the races after an extremely competitive first half in which we gave them some relatively soft tries.

“But we weren’t in the second half and we have to be better if we want to come to places like this in the future and win.

“We had parity in most of the collisions around the field, but it went wrong for us against their set-piece power. I knew the players would keep fighting and I was proud of their effort.

“It is a learning curve for us and you have to lose games like these before you can come back and win them. This is only the beginning for us and we will bounce back.”

READ  Liverpool’s Andy Robertson to be fit for Tottenham clash after minor injury against Genk
Share on FacebookShare on TwitterShare on PinterestShare on Reddit
newsgrooveApril 10, 2021