‘He drives me mad!’ Why don’t we dump toxic friends?


Roger and Jim have been friends for more than 30 years. When they were younger they were in a band together, and their friendship was forged over a shared love of music and beer. Even now, despite family commitments on both sides, they manage to catch up every couple of months. “Even though he drives me mad,” says Roger.

It is Jim who leaps to Roger’s mind at the mention of toxic friendships. Every time they meet, Roger says, they “tend to have the same conversation”, because Jim never listens to what he says.

Roger, now in his 50s, from the West Midlands, has never told Jim how he feels. “I believe it’s passed the point of politeness now. I’d expect a reply of: ‘Why didn’t you tell me years ago that I’ve been getting on your nerves?’”

Plus, Roger adds, Jim is one of only a few old friends: “It’s hard to think we would not see each other because of a few annoyances.”

A toxic friend may seem oxymoronic: unlike families or colleagues, where we might be obliged to maintain ties, most friendships we opt into. Yet nearly everyone has someone in their social network that they have mixed feelings about, says Julianne Holt-Lunstad, a professor of psychology and neuroscience at Brigham Young University in Provo, Utah. “The distinction seems to be that there are some people who just have more than others,” she says.

Holt-Lunstad began researching these “ambivalent relationships” in order to understand their impact on our health. There was already strong evidence that positive relationships have protective benefits, and that negative ones can be detrimental, “so we started thinking about those relationships that are a mix of both”.

I would feel so drained and awful after we hung out’

She found study participants’ interactions with these ambivalent friends was associated with increased stress and cardiovascular reactivity. Just the thought of them was enough to elevate heart rate and blood pressure. Surprisingly, blood pressure was also found to rise more in the presence of ambivalent friends than with people the subjects actively disliked.

“It’s the mix of positivity and negativity,” says Holt-Lunstad. “You may not know what you’re going to get from them, or it may be, because you care about that person, that when things are negative it hurts that much more.”

These are the people whom Bridget Jones likened to jellyfish, whose stinging remarks you don’t see coming but stay with you for days after.

Sophie, a twentysomething Londoner, remembers one such school friend: “I would feel so drained and awful after we hung out, and it took me a really long time to put my finger on why. She would subtweet about me after we met up, saying how much she hated red lipstick during the day, for example, if I’d been wearing it earlier.”

On those occasions that the friend was outright mean or rude, Sophie would call her out, “and she would then say I was too sensitive”.

Sam Owen, a relationships coach and the author of Happy Relationships, says backhanded compliments can be a hallmark of a toxic friend. So can nonverbal communication that seems at odds with their words, suggesting a breakdown in trust.

“The sensations you feel within your body will signpost you towards or away from the people in your life,” says Owen. If you frequently feel tense or demoralised in their presence, for instance, that may be a tip-off “that they are not truly on your team”.

The question is: why might we continue to invest in friendships that we have mixed feelings about, or that may even actively make us feel bad?

We can only maintain a total of 150 friendships, says Dr Robin Dunbar, a professor of evolutionary psychology at the University of Oxford, but we do not invest time or emotional closeness across them equally. In fact, his research has shown that about 60% of our total social effort goes to just 15 people, with 40% devoted to the five most important.

There is “constant turnover” in those groups over your life, says Dunbar; movement towards and away from that inner circle is simply a question of time spent bonding. “It’s a series of stages where you stop and evaluate at each one, and decide whether to go on or not.”

It means that people are less likely to actively sever ties with their frenemy than they are to make themselves more distant or unavailable. Sophie and her friend eventually drifted apart, at Sophie’s instigation. “I haven’t seen her for years. She occasionally sends me replies on Instagram – I always ignore them.”

Other people might choose to restrict the frequency with which they see their friend – or the context.

In setting out to answer why people maintain such ties at all, Holt-Lunstad had expected that the driving factors would be external; for example, you lived near each other or you had a lot of mutual friends. In fact, she was surprised to learn, they were mostly internal. A common justification was the sense of a sunk cost, says Holt-Lunstad: “They’d already invested a lot in the relationship.”

For many people, it may go back to school days. Dunbar says a few close friendships forged between ages 15 and 25 do tend to be more resilient through the passing of time, because of the intensity of bonding at that age. There is a cultural tie, too: “You know you have this long, deep history of co-living and sharing experiences together; you feel this sense of obligation out of respect to that old relationship, even if you have drifted apart.”

Holt-Lunstad’s research found that many participants saw turning the other cheek at their friend’s rudeness or bad behaviour – a sense of being the bigger person – as the right thing to do. How this reflected on them was also a factor, she says: “They didn’t want to be the type of person who couldn’t maintain a friendship.”

Often, too, the good times really did outweigh the bad. “They would stick around because of these other really good aspects about that person.” This is a reminder of the real feeling, and sometimes real pain, at the centre of these uneasy ties.

A “toxic friendship” typically indicates that a function or expectation of the relationship has been challenged, says the clinical psychologist Dr Miriam Kirmayer; for example, there has been a betrayal of trust or the investment is imbalanced. But can it be salvaged?

“The heart of this is self-reflection, so: ‘Do I have a sense of what is bothering me here?’” says Kirmayer. Especially strong emotions may indicate that one of our core values (for example, punctuality) has been violated, but we often may not have communicated that clearly to our friends. “Sharing the reason why this is challenging: people are often very receptive to that, and it can be a way to find common ground.”

If that doesn’t bring about the desired change, Kirmayer suggests shifting our expectations to focus on the positive contributions that our friends do make to our lives. That may require setting boundaries – for example, avoiding certain topics or activities that you know to be problematic – whether you choose to articulate them or not. “That tends to be a really helpful way to go about managing conflict because we aren’t giving up on the parts of the relationship that are working.”

Kirmayer goes on: “I also find it’s very easy to recognise somebody else’s behaviour and what they have done that we see as upsetting or wrong, and it is much more difficult, obviously, to look inward. That’s not to say that I encourage people to blame themselves, but to see all relationships, including friendships, as a dynamic – our friends are responding to us in some way.”

This speaks to a question that arose from Holt-Lunstad’s research, which she says warrants further inquiry: are those people who identify as having ambivalent friends realistic about relationships, or are they “expecting all benefits, and few costs”?

Holt-Lunstad says her work has caused her to reflect on her own relationships. “I don’t want to be the source of ambivalence for someone else. It’s caused me to reflect on ‘What kind of friend am I? Am I supportive, am I reliable?’ We can’t change other people, but we can change ourselves. The first step is always looking inward.”

Roger’s friendship with Jim is, after all, ongoing – for all his ambivalence. “I am self-aware enough to appreciate that I do things that drive him mad, too,” he says. “But maybe I do them on purpose now.”

Names of case studies have been changed 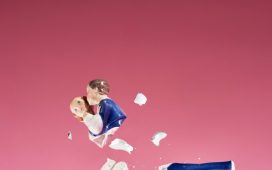 Is the internet responsible for increased divorce rates?

How we met: ‘I ordered a book from his shop so I could give him my phone number’

Blind date: ‘It would have been better if he hadn’t had to stop for a takeaway on the way home’

You be the judge: should my girlfriend spend less money on her cats?