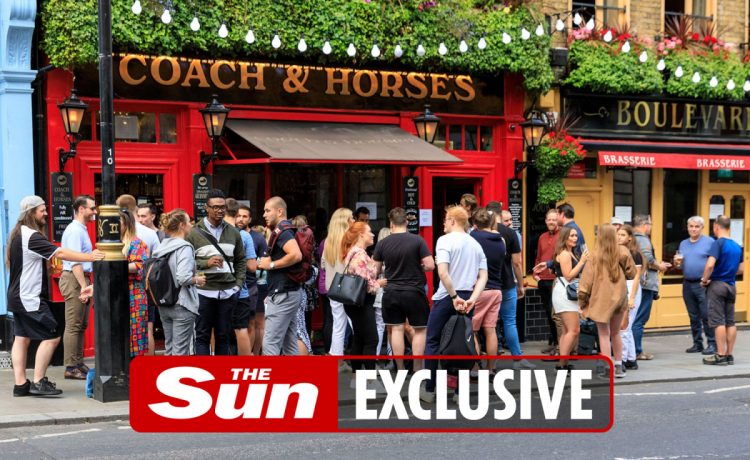 THE hated 10pm curfew will not return when pubs finally reopen in May, The Sun can reveal.

Boris Johnson has ordered “a simplification” of rules meaning punters will not have to buy a scotch egg to get served – but revellers will be encouraged to drink outdoors.

Ministers have pencilled in a return for takeaway pints in April, and with pubs and bars able to reopen fully a month later.

But big groups will have to stay in beer gardens and on pavements to begin with as “ventilation is key”.

Half of adult Brits will have been vaccinated by May it was confirmed last night – with 32 million over 50s and the vulnerable on target to be jabbed by the end of April.

And that opens the door to pints in the Spring sunshine as soon as April, and pubs by the second Bank Holiday weekend in May.

Ministers are determined for hospitality “to open properly this time” after many pubs were left uneconomically viable by the curfew and confusing tier restrictions on drinking with food.

The industry said last night that 87 million pints of beer had been wasted since pandemic started, costing the beer and pub sector £331 million in rolling lockdowns and tier red tape.

Emma McClarkin, Chief Executive of the British Beer & Pub Association, said: “Our sector is in limbo.

“And at several points in the last 12 months pubs and breweries have effectively had to pour their revenues down the drain.”

Complex rules varying in area to area left punters and landlords confused, and police warning they were all but unenforceable

Rules on what you had to eat to get served left even ministers that drew them up struggling to clearly define what constituted “a substantial meal.”

Michael Gove memorably declared that a scotch egg would suffice, while some watering holes got away with serving tiny bowls of chips with a pint.

Last night multiple Whitehall sources and ministers confirmed the “early days” plan, but stressed “everything is contingent on the cases and deaths continuing to fall”.

One said: “Things that were proven to be a hindrance like 10pm drinking up, will go. If pubs are to reopen for good they’ve got to do it properly and can’t be stuck in limbo like last year.”

Another added: “Ventilation is key to tackling the virus so expect a major push to drink outside to begin with, especially for larger groups.”

The PM will set out a date for when pubs and restaurants can start to trade again when he announces the plan for ending lockdown in a speech on February 22.

The first stages are likely to include adults able to exercise and mix together outside when the schools go back in March.

Under the draft blueprint, activities that can take place outdoors will be prioritised as that’s where the virus spreads less easily.

So outside markets are set to return before high street shops, and outdoor drinking and dining will be allowed before eating indoors.

The rules will be applied nationwide after ministers decided not to return to the regional system of tiers when they lift restrictions.

So far only the earliest date schools can return has been agreed formally, but others measures are being drawn up by officials with Ministers due to sign them off in the coming days and weeks.

But hopes of drinking in the sunshine were given a major boost by the confirmation half of UK Adults will have been vaccinated by the end of April.

32 million jabs for the over 50s and the vulnerable had been promised by the Spring – but the Cabinet Office confirmed today that means “by May.”

The admission came as they confirmed local elections would take place that month despite some Covid restrictions likely to be in place.

They said: “The UK’s vaccination programme is planned to have reached all nine priority cohorts by May, meaning that the Government can commit to go ahead with these polls with confidence.”

On Thursday Vaccines Minister Nadhim Zahawi had said Britain will be able to massively ease restrictions once all over-50s have been offered the jab “by late spring”.

But Downing Street had repeatedly refused to say when they believed Spring to end and Summer start.

And the end of April target is even more ambitious than lockdown sceptical Tory backbenchers had hoped.

Mark Harper — chairman of the Covid Recovery Group of lockdown sceptics, with 70 Tory MPs — had said: “Back-of-the-envelope calculations I did based on two million doses a week mean you could get the top nine priority groups, first doses, and the top four groups, second doses, all done by the end of May.”

He added: “So it seems to me by the time you get to the end of May, no later than that, you should be in a position to get rid of restrictions completely.

Restrictions can’t ease until NEXT YEAR due to aggressive strains, warns Sage

But last night Matt Hancock confirmed the May target in an interview with Sky News.

The Health Secretary said: “My plan is that we should be able to offer a vaccine to everybody in categories one to nine – that’s all the over-50s – by May.

“Lots of things have got to go right to hit that goal, especially supply, which is the rate-limiting factor, but I’m sure, working with the NHS and everybody else who is making this happen, that if we keep going at the pace we can, then we can make sure all the over-50s get the offer of a vaccine by May.”