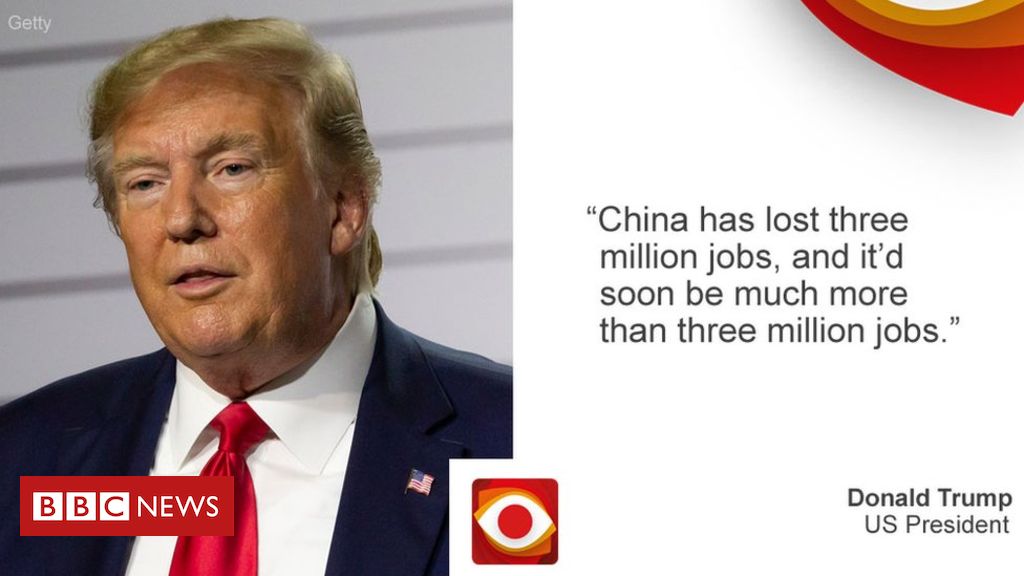 Claim: President Trump says three million jobs have been lost in China as a consequence of the trade war with the United States.

Verdict: While estimates for China’s employment vary widely, they do not generally support Mr Trump’s claim. When asked, the White House directed us to a survey that gave a lower figure.

Over the past year, the United States and China have imposed tariffs on billions of dollars worth of one another’s goods.

“China has taken a very hard hit over the last number of months,” he said at the recent G7 Summit.

This is not the first time President Trump has boasted about the damage the trade war has inflicted on China. “They’ve lost two and a half million jobs in a very short period of time,” he said last week.

First, let’s look at where President Trump may have got his numbers from.

The White House press office responded to our query with a link to an article published in July in the South China Morning Post, a Hong Kong-based newspaper.

This article quoted a report from a Chinese investment bank, China International Capital Corp (CICC), with an estimate of trade war-related job losses in the manufacturing sector of up to 1.9 million between July 2018 and May 2019.

When pressed further, Mr Trump’s spokesperson said the CICC survey had not included data after May, when there had been a significant increase in tariffs on goods from China.

However, no explanation was offered as to where the figure of three million – or the 2.5 million a week earlier – had been sourced.

The BBC has also contacted the US Treasury Department, but has not yet received a response.

What can we say about job losses in China?

There is no official Chinese data specifically on job losses as a result of the US-China trade war, but economic surveys carried out by two Chinese banks suggest a range of 1.2 to 1.9 million jobs were impacted by the trade war in the industrial sector.

While the imposition of tariffs has had an impact on Chinese manufacturing, there are other reasons for job losses.

“It’s possible to count job decline but the problem is – what’s the cause?”, says Mary Lovely at the Peterson Institute for International Economics, a US-based think tank.

“It’s impossible to establish cause and effect,” she says.

Job losses in manufacturing have been part of a longer-term trend as China moves towards a more service-based economy with the creation of jobs in finance and technology, and this transition began even before the trade war started.

So, losses in the industrial sector need to be balanced against gains elsewhere across the economy.

The Chinese government has also given a particular emphasis to increasing employment in urban areas.

“Urban services have absorbed much of the labour from closed factories. There is also reverse migration going from coastal provinces to their origin provinces like Anhui, Sichuan and Henan, where local industries are growing,” says Dan Wang, China Economic Analyst at The Economist Intelligence Unit in Beijing.

China’s total labour force in 2018 was 788 million, according to the World Bank.

So, job losses of two million in the manufacturing sector over the past year would represent just 0.25% of the total workforce.

The country’s overall unemployment for 2018 – according to official government statistics – was 3.8%, the lowest level since 2002.

But President Trump’s intervention comes at a time when the Chinese Communist Party leadership is paying closer attention to the jobs market – a key indication of the Party’s performance.

In July, the country’s top decision-making body, Politburo, said it has placed employment as one of its top priorities.

Send us your questions