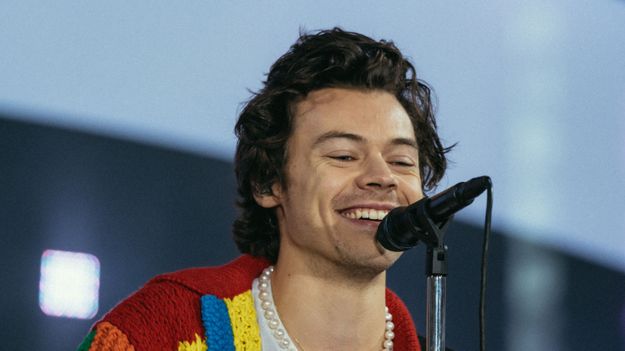 Harry Styles is currently on tour, packing arenas like Madison Square Garden and Chicago’s United Center with characteristic panache and flair and colorful outfits. But this morning (October 19), he’s making headlines for his (rumored) work on the big screen, not the stage.

On Monday night, director Chloé Zhao‘s long-anticipated new Marvel film Eternals had its glitzy Los Angeles premiere, and with that came a particularly juicy and spoilerific scoop from critics who screened the film: Styles has apparently joined the MCU in the role of Thanos’s brother Eros, “a fun-loving, carefree womanizer,” as the Marvel fandom entry describes him. Seems right!

The implications of sharing this scoop so far ahead of the film’s actual release date (November 5 in the U.S.) have been widely debated on Twitter this morning, especially given the culture of spoilers and embargoes that has permeated the MCU and other large blockbuster films in recent years. But what’s clear is that even the suggestion of Styles’s presence in the film, if critic tweets are to be believed, has set off a whole new tide of excitement for one of the most looked forward-to releases of 2021.

Styles made his acting debut in Christopher Nolan’s World War II film Dunkirk in 2017, the same year he released his first, self-titled solo album. He’s got a main role in his girlfriend Olivia Wilde’s upcoming feature Don’t Worry Darling alongside Florence Pugh, Chris Pine, and Wilde herself, due out in September 2022. And he spent the spring months earlier this year filming My Policeman in England with The Crown‘s Emma Corin. (There are so many great Getty photos of him in costume as the titular bobby, FYI.)

Eternals, in addition to being a potential catapult for Styles’s entry into the MCU, is also the movie that star Kumail Nanjiani famously got very jacked for a few years ago. It’s also Zhao’s first foray into the Marvel world and arrives right on the heels of her history-making Best Director Oscar win earlier this year. Go see it when it drops in just a few weeks.

Tell us what you think about the documentary The Beatles: Get Back