Details of the hotly-anticipated Harry Potter video game based on JK Rowling’s hugely popular series of books have been leaked.

The ‘high-end’ role-playing game will let ‘muggles’ become witches and wizards, cast spells and attend classes at Hogwarts School of Witchcraft and Wizardry.

Controlling a virtual avatar, gamers will be able to roam a vast, open-world re-creation of Hogwarts and its surrounding areas, according to developers quoted by Bloomberg.

The game is in development at a Warner Bros-owned studio, Avalanche Software, which has a history of developing games based on films, including Toy Story and Cars.

It’s reportedly due for release late in 2021 for Sony’s new PlayStation 5 console, which will be released in late 2020, and Microsoft’s Xbox Series X consoles.

Footage of the game has already been leaked in a video, which was confirmed to be authentic by Bloomberg’s sources at Avalanche Software. 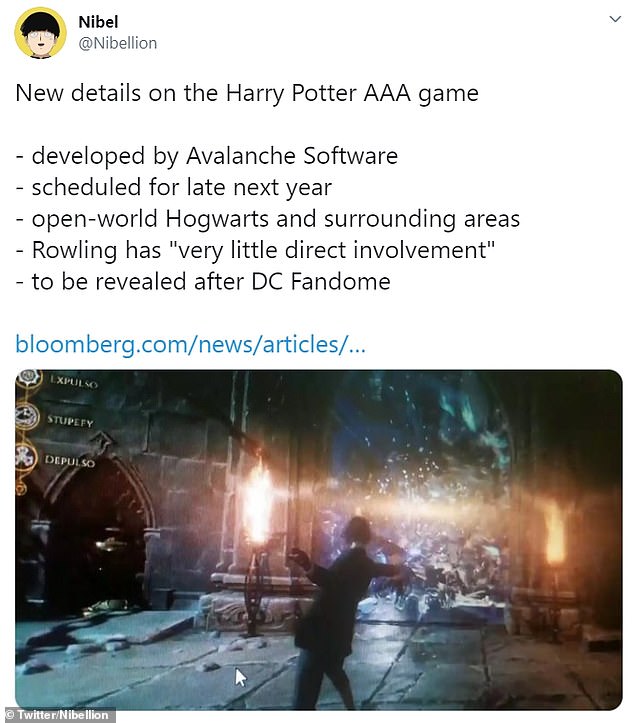 Video games blogger @Nibellion posted a breakdown of the confirmed features, as reported by Bloomberg, as well as earlier footage of the gameplay

‘The long-rumoured project is very real, according to two people currently working on it,’ said Bloomberg’s Jason Schreier, based on information from two employees who requested anonymity over ‘fears they would be fired for speaking publicly about an unannounced game’.

Despite the global pandemic and a rumoured sale of the Warner Bros video game publishing business by owner AT&T, the game remains on track, he said.

The game was previously leaked in just over a minute of footage back in 2018, which shows the game’s avatars petting dragons, fighting trolls and engaging in duels with dark wizards.

The video also shows multiple settings inside Hogwarts castle, including the Great Hall, the Potions dungeon, the Herbology greenhouses and the Forbidden Forest, as well as what seems to be the nearby village of Hogsmeade, where students stock up on magical supplies.

The sneak preview also shows a menu where players can select the avatar’s skin colour, eye colour and other physical features to create an avatar that most closely resembles them.

The leaked video was originally posted to YouTube in 2018 by someone using the name RastaPasta with a description of the game, although the Bloomberg sources have said some of the rumours that have since circulated about the game are not true.

‘Set in the 19th Century (1800’s) Wizarding World, this third person open-world action RPG [role-playing game] centres around your character with unique abilities who has earned a late acceptance to Hogwarts School of Witchcraft and Wizardry,’ the description said, as posted by a Harry Potter fan site.

‘You are a newly arrived 5th year student to Hogwarts that demonstrates a latent gift for magic with a unique ability to track and identify remnants of a potent ancient power. 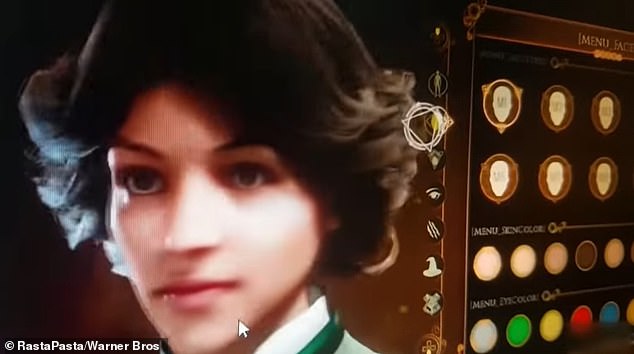 ‘Upon arrival, strange events begin to materialise In the Forbidden Forrest and trouble begins to brew within the castle walls.

‘Together with Professor Elezar Fig, you embark on a journey through both familiar and never before seen locations to bring to light the truth behind these mysterious occurrences.’

The publishers were set to announce the game at this year’s E3 convention at the Los Angeles Convention Center in June, before the event was cancelled due to the coronavirus pandemic.

It’s not known when the game will now be officially announced or whether the unveiling will be saved for another convention after the pandemic. 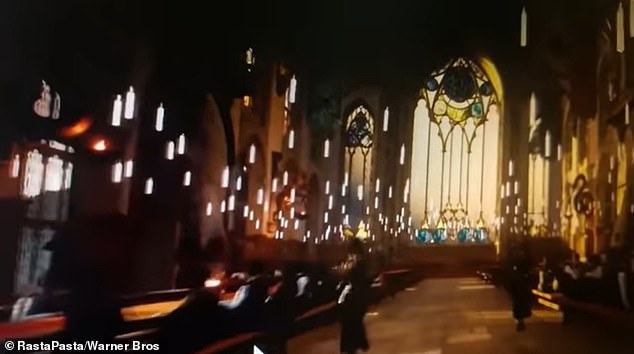 Inside the Great Hall at Hogwarts, Harry Potter’s school, as seen in the leaked video by RastaPasta

Avalanche Software, which is also said to be working on a Batman game, is yet to reply to MailOnline’s request for comment.

One of Bloomberg’s sources said Harry Potter author Rowling has ‘very little direct involvement’ with the making of the game.

Warner Bros’ management has not directly addressed recent comments from Harry Potter author J.K. Rowling that were viewed as transphobic, which threatened  to throw the game off track.

Rowling has been the subject of an increasing flurry of online abuse since posting a blog post last month reiterating her belief in the importance of biological sex and revealing that she is a domestic abuse survivor.

Rowling expressed fears over revamped gender recognition legislation ‘will in effect mean that all a man needs to become a woman is to say he’s one’.

‘I stand alongside the brave women and men, gay, straight and trans, who’re standing up for freedom of speech and thought, and for the rights and safety of some of the most vulnerable in our society: young gay kids, fragile teenagers, and women who’re reliant on and wish to retain their single sex spaces,’ she said.

Rowling had already sparked fury days before when she reacted to an online article titled ‘Opinion: Creating a more equal post COVID-19 world for people who menstruate’.

‘”People who menstruate.” I’m sure there used to be a word for those people. Someone help me out. Wumben? Wimpund? Woomud?’, the award-winning writer told her 14.5 million followers at the time.

In response to the online furore generated by the statement, Warner Bros, which published the Harry Potter film series, appeared to indirectly address the matter by touting its ‘inclusivity’. 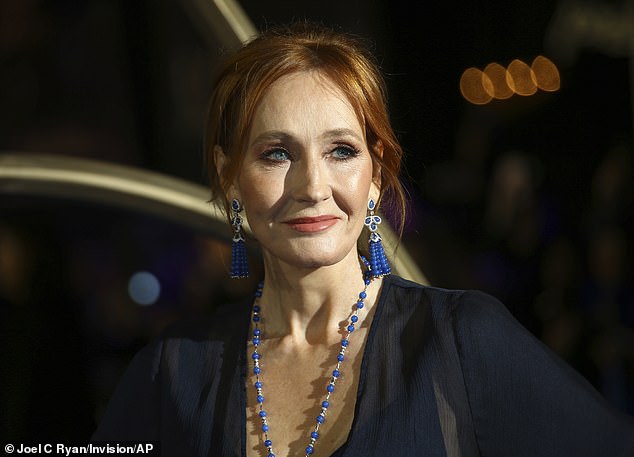 ‘The events in the last several weeks have firmed our resolve as a company to confront difficult societal issues,’ the studios said in a statement.

‘Warner Bros’ position on inclusiveness is well established, and fostering a diverse and inclusive culture has never been more important to our company and to our audiences around the world.’

Some social media users have already threatened to boycott the game on the basis that Rowling will get a royalty cut from sales. 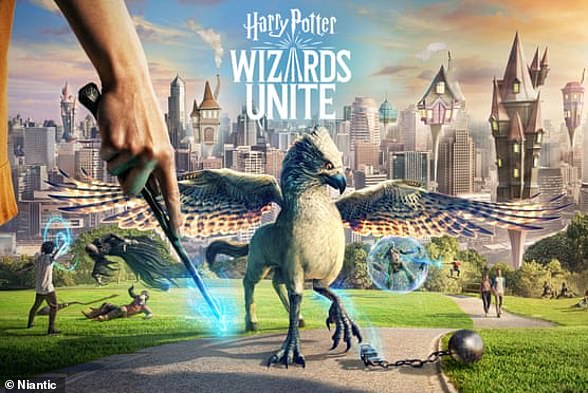 The augmented reality game is made by Niantic and will see players use their wand and prepare potions to solve the mystery of ‘The Calamity’.

Combining elements from the Harry Potter series and Fantastic Beasts and Where To Find Them, The Calamity has meant that items from the wizarding world are turning up in the muggle universe causing chaos.

Players have to physically visit the location, using the cameras on their phone to find missing wizarding objects and creatures before using their wand or spells to collect them and return them.

Its predecessor, Pokemon Go, was wildly successful, with 28.5 million US users at its peak.

Coronavirus live news: 'No country can get control of its epidemic' without contact tracing, says WHO

Coronavirus live news: 'No country can get control of its epidemic' without contact tracing, says WHO