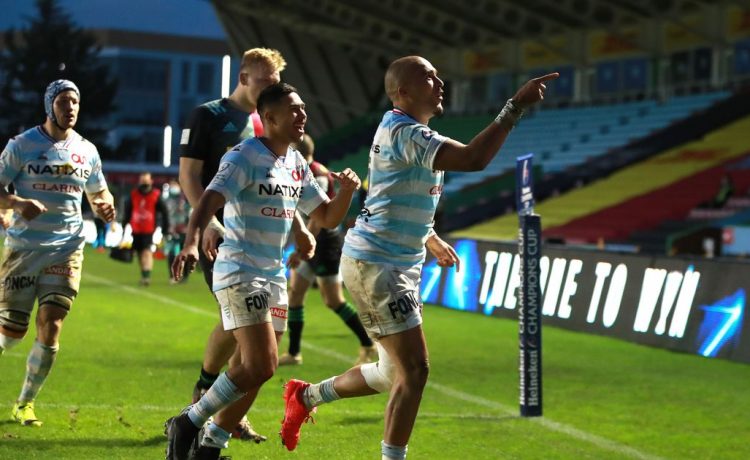 T’WAS the nightmare before Christmas as Finn Russell’s Racing 92 handed Harlequins their heaviest ever home defeat in Europe.

The Scotland star and his X-factor pals from across the Channel cut Quins to ribbons to dump them out of the Champions Cup.

This was men against boys as Racing, beaten in three of the last five finals, helped themselves to a magnificent seven tries.

Quins were dire and team boss Paul Gustard admitted: “There was not one facet of the game where we performed.

“There are a lot of upset people, myself and the coaching staff included. We played against a team that was very good and we were anything but.

“We were way off. Off in the warm-up, quiet, no bounce about us. No talk, no noise, no energy. Unfortunately we saw the consequences of that. A really really poor performance.”

This was as complete a win as you will see, from the moment Teddy Thomas waltzed through a non-existent defence on Racing’s first attack for what Gustard termed an “unbelievably soft” score.

The gulf in class was apparent long before the rampant Parisian outfit claimed the four-try bonus point with half an hour still to play.

Every time they went to their lineout drive they seemed to score and Russell led Quins such a merry dance that at no point was the result ever in doubt.

Unbeaten Wasps apart, this has been a poor tournament for English clubs so far. Gloucester, Exeter and Bristol have one win apiece yet have their work cut out to make the knockout stages.

Against opposition of this quality Quins needed everything to go right. Nothing did. They trailed 20-0 at half-time and two games into this competition have yet to register a first half point.

Any hope of a resurgence ended 38 seconds after the restart when Simon Zebo scored and from there the only question was how big a gubbing this would be.

By contrast Racing were a joy to watch – captain Henry Chavancy later admitting they are a team on a mission to avenge their defeat in last season’s final.

Nobody shone brighter than Russell, whom former Quins star Ugo Monye hailed as the “most naturally gifted fly-half in world rugby”.

Russell liked that, but passed the praise onto his forwards.

“I imagine for teams facing us it’s quite daunting to come up against that power,” he said. Quins were not about to disagree.