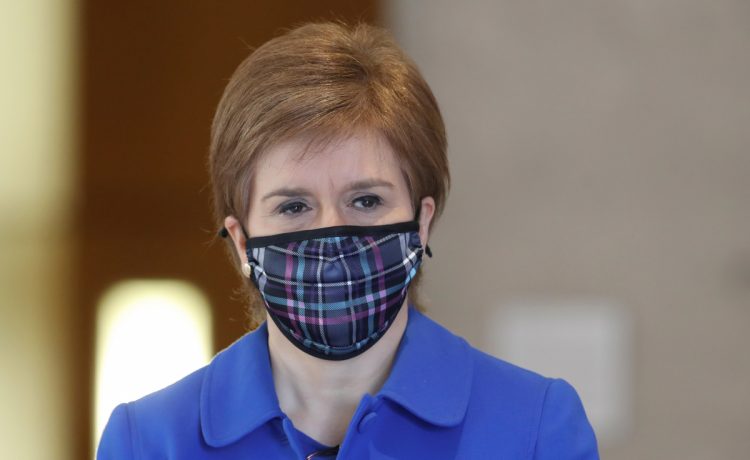 SCOTS will be able to get a haircut, travel and eat at the pub indoors ahead of people in England, it was revealed today, piling pressure on the PM to act quicker.

Easing lockdown is a matter for devolved governments meaning the rules are different for England, Northern Ireland, Scotland and Wales.

This afternoon the Scottish leader brought forward a range of dates for when the nation will finally be allowed to reopen after months shut.

The move piled pressure on the PM to act quicker to ease lockdown as cases continued to fall.

And Ms Sturgeon said it was the “most hopeful” she had felt for a long time – in hopes Scots can have a near-normal summer.

Just 5,000 cases were recorded yesterday in the UK – and 64 deaths from Covid.

And more than 24million people across the UK have had their first jab – nearly half of the population.

The First Minister said today that while she hopes to be able to lift the stay-at-home order and open retail and hospitality at different points next month, work was still required to ensure cases did not soar again

She said: “This is certainly the most hopeful I have felt about the situation for a long time.

“However, as you would expect, I do need to add a note of caution.

“I know this is the bit none of us want to hear, but the route back to normality does depend on continued suppression.”

The First Minister added: “We must continue to suppress it to the lowest level possible.”

Indoor opening of hospitality like pubs and restaurants can take place from April 26 – but it’s limited initially to food and non-alcoholic drinks until 8pm.

But people in England will have to wait until May 17 to have a meal indoors, under the PM’s plan, though there will not be a curfew.

And England’s pubs will still open first – outside on April 12. Scots will have to wait until April 26 and will still face a 10pm curfew on boozing, which has been ditched down south.

Shaggy-haired Scots will be able to get a long-awaited trim from April 5 – a week before others in England reopen on April 12.

Wales opened up its salons last Monday, but Northern Ireland has yet to set an exact date.

Weddings of up to 50 people are expected from April 26, but the PM hasn’t yet said when that many people can attend south of the border.

From April 12 in England Brits will be able to get hitched in a group of up to 15, and there will be a max of 30 allowed from May 17 onwards.

At the moment only people who are dying or have exceptional circumstances are allowed to get married in a very small ceremony.

Meanwhile, travel restrictions within Scotland are expected to be lifted from April 26, but this isn’t expected in England until May 17, when internal travel will be allowed.

She added from early June her hope is that all of Scotland will move to Level 1 of coronavirus restrictions – the second lowest of five tiers.

By the end of June, she said all of Scotland will move to Level 0, with no restrictions on socialising at all.

The PM hopes to move to that stage by June 21, but has said he will confirm this nearer the time.

It’s not clear whether social distancing rules and masks will need to carry on past this point.

RULE OF SIX OUTSIDE
England: March 29
Scotland: April 26, but only up to 10pm

READ  Brexit: No chance of US trade deal if Irish accord hit - Pelosi

PM review warns another pandemic is a ‘realistic possibility’ by 2030

FIT FOR THE FUTURE