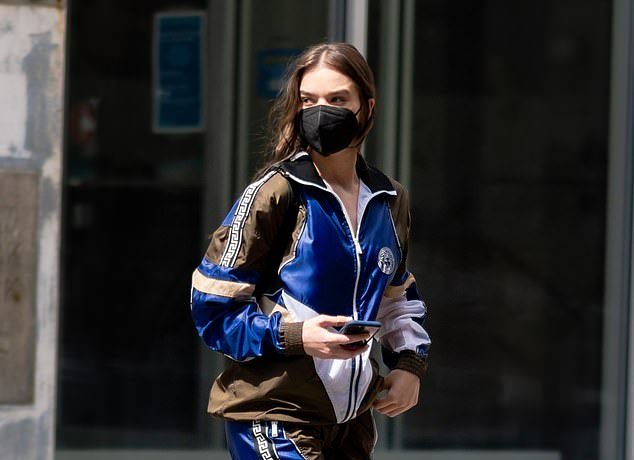 Hailee Steinfeld opted for a sporty look with an elevated twist for some weekend errands in NYC.

The 24-year-old singer-actress stepped out in a colorful Versace tracksuit ahead of a workout and looked effortlessly cool while doing so.

The star who plays titular character Emily Dickinson in the series Dickinson, recently confirmed a third season was on its way to Apple TV+ as she shared a corseted selfie in late March. 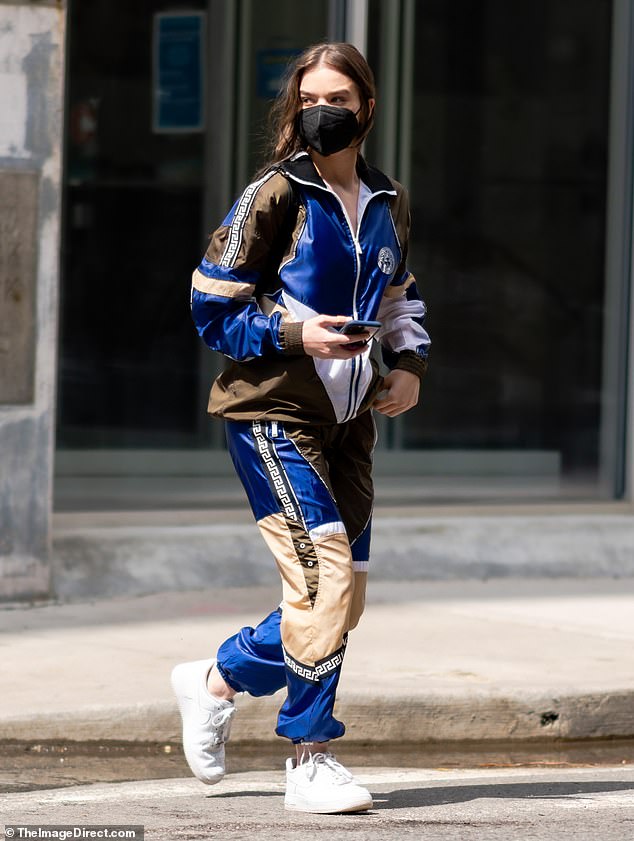 Bold look: Hailee Steinfeld, 24, looks bold in a colorful Versace tracksuit as she runs errands in NYC ahead of a workout

Hailee’s designer tracksuit retails for over a $1000 and she paired the look with simple white Nikes.

She was seen with her phone in hand as she made her way with a small black backpack and a protective black face covering.

The True Grit actress snapped a quick selfie while waiting for her adorable pooch to finish a grooming in Brooklyn.

The Los Angeles born stunner showed off light mascara and a pair of tiny hoop earrings, leaving her brown tresses down. 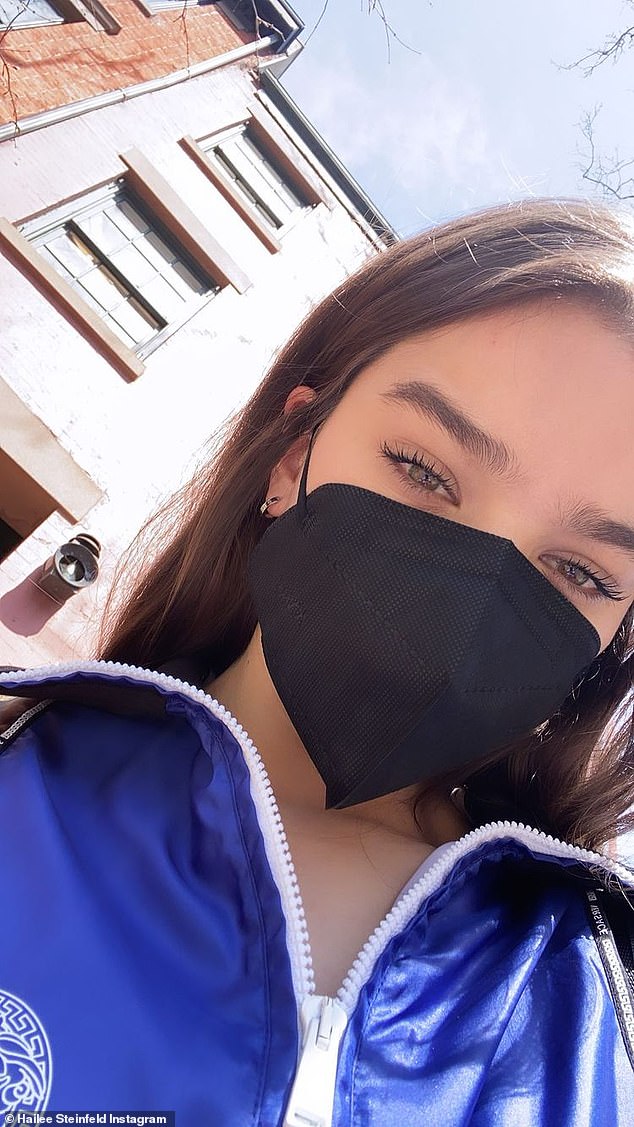 Selfie: The True Grit star snapped a selfie while waiting for her pooch Martini to finish up at the groomers 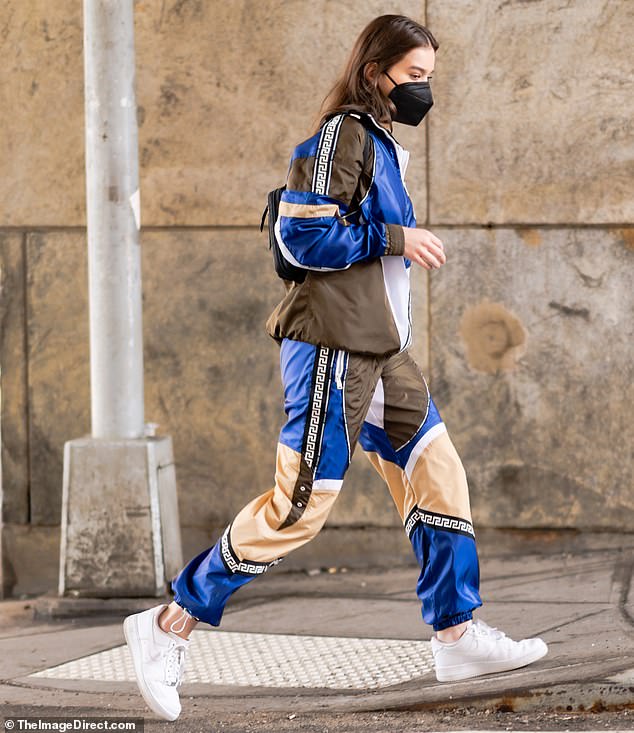 Designer duds: Hailee’s designer tracksuit retails for over a $1000 and she paired the look with simple white Nikes

Upon returning home with the freshly styled Yorkie, Martini quickly ran interference on her home workout.

She had explained the meaning behind the dog’s name in a fan Q+A last year.

‘In film terms, ‘Martini’ means the final shot before wrapping the set for the day. She was the last lil baby I saw after a few months of looking. Plus she’s teenie,’ the actress told her 13.6M followers.

Hailee settled onto her yoga mat in a black spandex set before her tiny pup made it clear she wanted some attention. 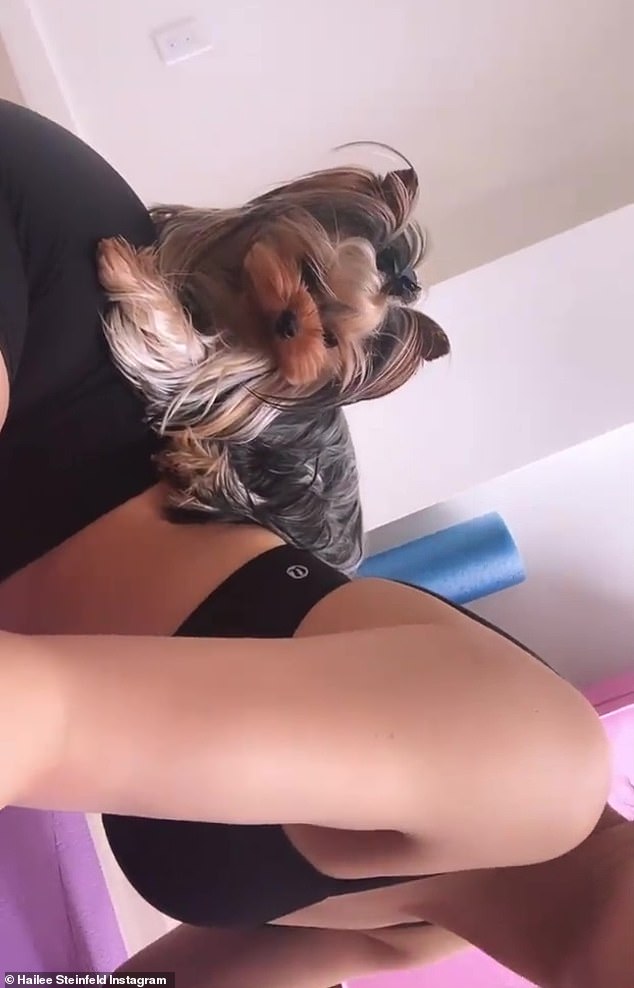 Interference: Her dog Martini made it clear she wanted in on the action as she climbed on top of her back while she was attempting to stretch 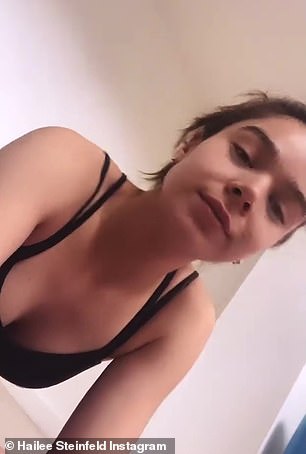 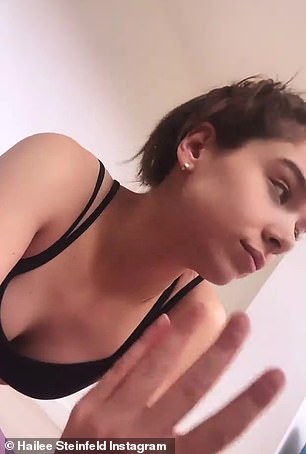 Workout woes: ‘Just trying to get a little stretch in…that’s all – do you mind? Ma’am?,’ she joked while filming herself 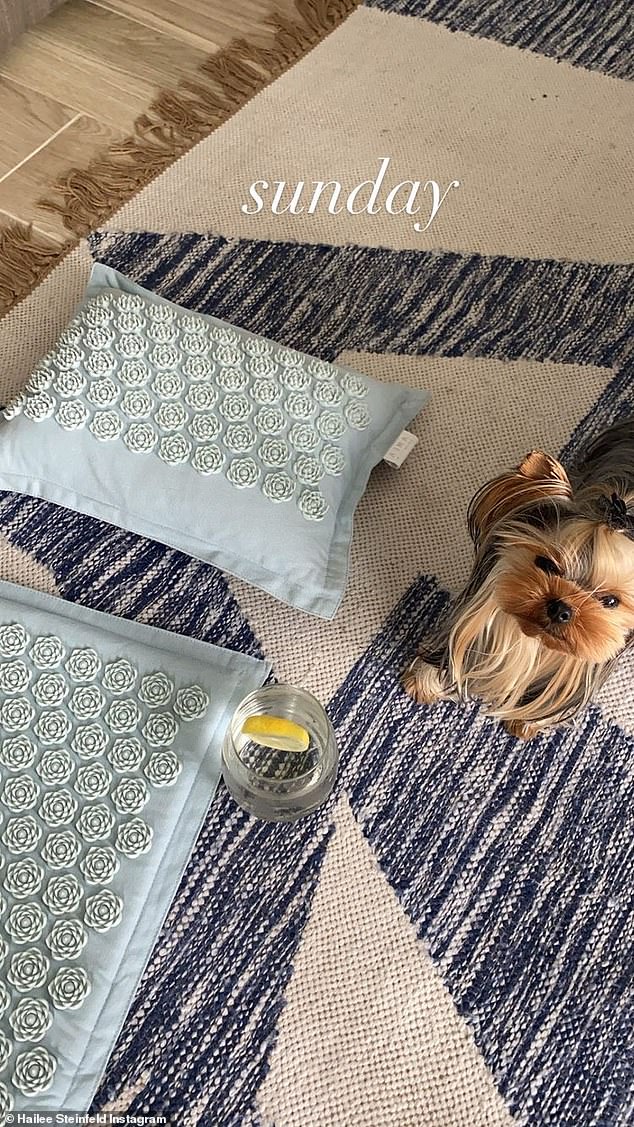 Setup: The Spider-Man actress debuted her workout set up before reclining on the floor with some lemon water 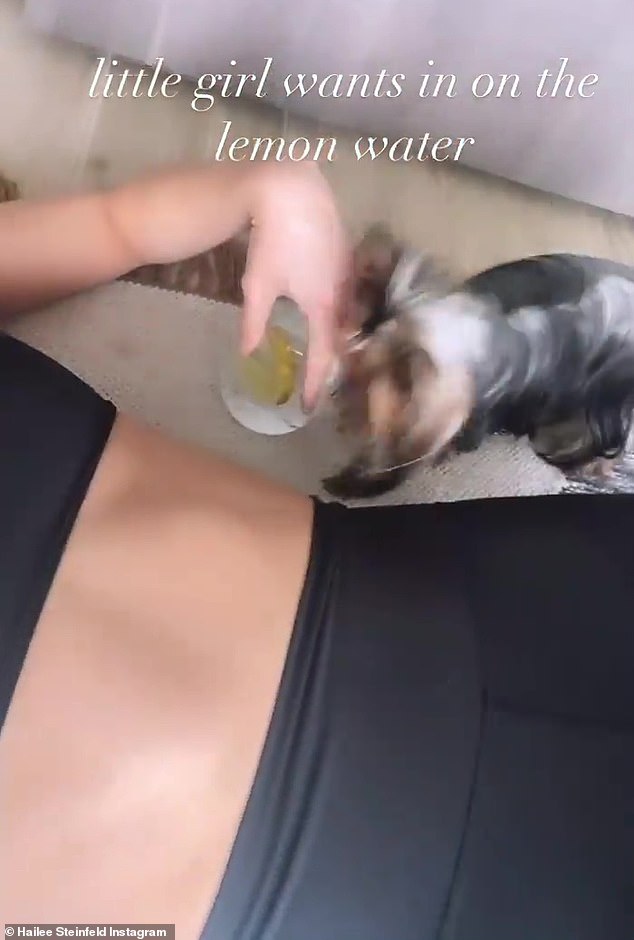 Attention: Her Yorkie just wanting a bit of attention from her mom, Hailee embraced the situation with a smile

‘Just trying to get a little stretch in…that’s all – do you mind? Ma’am, Ma’am?,’ she joked as she broadcast the situation on Instagram.

Focusing on some Sunday wellness, the Edge Of Seventeen star opted for lemon water and a bit of body movement ahead of a busy week.

In February Hailee was hard at work filming the Marvel mini-series Hawkeye where she stars as the titular character. The production began shooting in December and films between Atlanta and NYC. 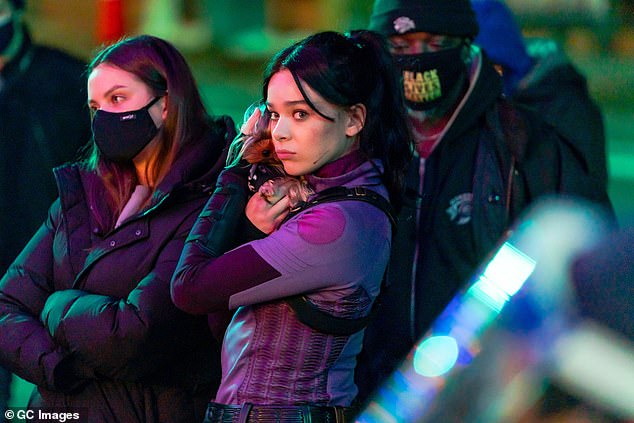 Set life: She has been hard at work filming the new Marvel mini-series Hawkeye in NYC since December; pictured December 2020 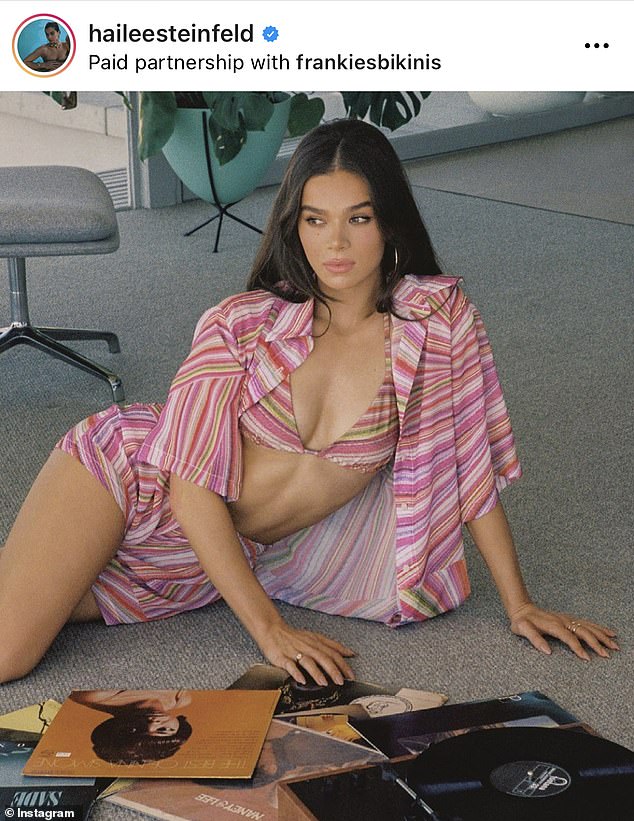 Bikini line: In addition to singing and acting she also has her own collection with celeb-favorite bikini line Frankie’s Bikinis

Hailee was in a relationship with former One Direction member Niall Horan but they called it quits after 10 months of dating in 2018.

Their relationship inspired a few emotional tracks on her 2020 EP Half Written Story, including one in particular whose name may be a play on his boybander history.

‘There’s a song on the record called Wrong Direction, which I found more difficult to write than the others just because of… I mean, just being in that headspace,’ she told SiriusXM’s The Morning Mash Up.

After their breakup she seemed to reunite with boyfriend Cameron Smoller in 2019 when they were spotted at a Billie Eilish concert together. They had initially dated from 2016-2017. 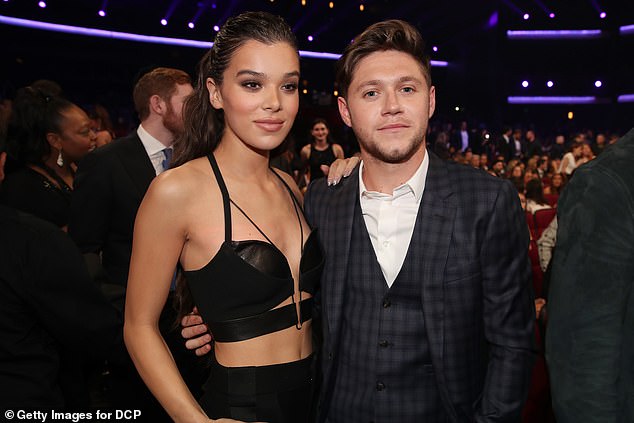 Heartbreak: She turned her 10-month relationship with Horan into art when she penned a song about their relationship and breakup for her 2020 EP Half Written Story with a track called ‘Wrong Direction’; pictured 2017