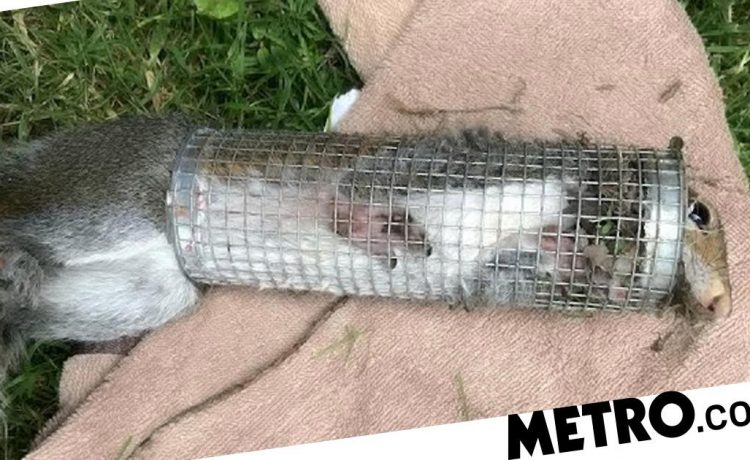 Few can say they are not guilty of going in for the last few bites of a delicious meal which filled them up long ago.

But this little squirrel had to be rescued from his own overeating, after he got himself stuck inside a bird feeder.

The little guy had wriggled into a thin, circular feeder to reach some seeds a woman had left out in her back garden in Northwich, Cheshire.

But he ended up trapped, with his jaw caught on the feeder’s metal rim and his claws pressed against the barrier meaning he could not move.

The woman spotted him rolling around, with his head poking out the top of the feeder, on June 19 and called the RSPCA.

Inspector Caren Goodman-Janes had to carefully drag the squirrel’s squished body out from the bottom of the wire tube.

She said: ‘As his bum was trapped he really must have felt like he had quite literally hit the bottom – but luckily his predicament was spotted by the neighbour who alerted us or he could have endured prolonged suffering.

‘I am not sure if he went in the feeder upside down then, after having some seed, realised he was unable to get back out.’

Although the tiny creature was scared, he was not hurt and he made a ‘quick getaway’ as soon as he was freed.

‘He probably needs to lay off the nuts for a while,’ Caren said.

Whilst there are many squirrel-proof bird feeders, these often end up trapping wildlife more than regular feeders.

Caren said: ‘I would urge people who have them to check their feeders regularly to look out for any trapped wildlife and if you are going on holiday take them down.

‘Alternatively use non-squirrel proof feeders which may attract other wildlife but at least it will prevent animals like squirrels getting trapped.’