Gordon Ramsay’s eldest son is not following in his father’s footsteps and has joined the marines.

Jack Ramsay, who is close to the Michelin-starred TV chef, has abandoned his lavish lifestyle to join the Royal Marines as an £18,000-a-year recruit.

According to reports at the weekend, Jack, 20, began the corps’ gruelling basic training course late in 2019 and hopes to earn a coveted green beret this autumn.

Despite his public school education, Jack has enlisted as a marine rather than a young officer.

It means he will learn military skills alongside recruits from a wide range of backgrounds including working-class recruits, some of whom will be aged 16 with no academic qualifications.

Jack allegedly started the gruelling 32-week training schedule late last year and he looked the part because he had shaved his head in photographs shared by the family over the festive period.

A source said: “He’s getting his head down and delivering the goods so far. He seems fit and is well liked.

“Not surprisingly, there’s a lot of good-natured banter when Jack and his mates sit down to eat and when they’re on a field exercise about who should prepare the rations.”

Jack did say last year that he wanted to step outside his comfort zone.

On the Channel 4 documentary Born Famous, he admitted: ‘I have grown up in a bubble. I’ve never had to fight or do anything for myself.

Last week it was announced that Jack’s dad Gordon has a new job too with and will put 12 potential food and drink entrepreneurs “through hell” in a new BBC show.

The 53-year-old gives his own financial backing to the winner to get their idea off the ground in the eight-part series, to be filmed later this year.

Ramsay’s previous shows, such as Hell’s Kitchen, The F Word and Ramsay’s Kitchen Nightmares, have aired on ITV and Channel 4.

Gordon Ramsay’s Future Food Stars will be broadcast on BBC One.

Ramsay said: “The future of our food industry has never been more exciting. I can’t wait to search across the country, unearthing some of Britain’s most entrepreneurial talent.

“I’ve spent the last 21 years at Restaurant Gordon Ramsay nurturing, supporting and mentoring some of Great Britain’s greatest chefs and that’s truly why I think investing in the next generation of talented individuals is so important.”

Ramsay and his wife Tana welcomed their fifth child, son Oscar, in April. They also have three daughters.

Love Island stars before surgery uncovered – and they're totally unrecognisable 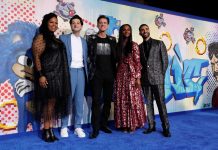