Goats were subjected to violence and neglect at a showcase farm whose milk and cheese are sold in UK supermarkets and Marks & Spencer, according to investigators who carried out secret recordings.

Hidden cameras at the award-winning Pasture House Farm near Skipton, North Yorkshire – one of the UK’s largest intensive goat dairies – showed animals apparently so lame they could not walk.

The video also revealed the killing of baby goats deemed of no value to the industry – thought to be the first time this has been recorded in the UK.

Goats’ milk is often marketed as an allergen-free, healthier or more ethical alternative to cows’ milk.

But activists for the Animal Justice Project (AJP) who for three months monitored the farm, which supplies milk to Delamere Dairy, said they saw a string of shocking scenes including:

Delamere says it operates a “strict, independently monitored, farm assurance and welfare code”, which means its milk “is sourced to the highest welfare standards”.

It says all its supply farms are family-run and “Red Tractor-assured”, and the animals live in light, airy barns with deep bedding and plenty of space.

Red Tractor is a not-for-profit company that is the UK’s biggest farm and food assurance scheme. Its rules state that animals’ health and welfare “must be met at all times and that lame goats must be identified, treated and managed”.

Phil Ormerod, who runs the farm, is a director of the Milking Goat Association and has been described by the Innovation for Agriculture consortium as “one of the most progressive farmers in the industry”.

But the animal rights organisation said it was disturbed to see workers hitting and slapping goats to various degrees on eight occasions. Some pulled the animals’ tails and grabbed their noses.

They said the footage showed “numerous severely lame” goats in the birthing pen that struggled to walk to reach food and water.

Some tried not to put weight on their legs in pain, and one was unable to stand for 28 hours, it’s claimed. One was seen in the footage trying to walk on its front knees.

Claire Palmer, founder and director of AJP, said: “Workers were not recorded assessing pregnant goats for lameness, mastitis or any other health concern but saw severely lame goats in the parlour but did not act, instead hurrying them along with others.”

Animals were unable to display natural behaviour because they were never let outdoors, and one kid was “hit in the face when it tried to depart from a herd”, she claimed.

Photographs of bodies left on the ground are too unpleasant to publish.

Delamere says goats have not evolved for the British climate, with feet designed for dry, rocky environments.

The farm, which has around 2,000 animals, is one of the largest intensive goat farms in the UK, and also sells animals for meat. It is featured on Delamere’s website.

Young animals were allegedly left with “bloody head wounds” after disbudding – destroying tissue around the horn bud, which is done to stop horns from growing and potentially injuring other animals or people.

The footage showed workers failed to carry out twice-daily checks as advised by Red Tractor, according to the activists, and pens were not cleaned out during the filming using 10 cameras, with “fresh straw put on top of sodden”.

The investigators also say piles of dead goats were seen dumped outside on a path and in sheds, which “risked spreading disease”.

“Two piles were left outside for 11 days the first time and 14 days the second time, and birds were feeding from the bodies,” Ms Palmer said.

“We estimate from counting bodies on dead piles that at least 200 goats were killed and thrown on piles during our investigation. This goes against government guidance and Red Tractor goat standards.”

Bodies were thrown on top of one another without being checked for signs of life, she claimed.

Delamere, whose turnover is around £30m from UK sales and exports, has won a string of industry awards.

It is as well known for goat milk products as St Helen’s, where, as The Independent revealed in 2020, workers were found subjecting goats to a string of brutal attacks, including punching and tail-twisting.

At Pasture House Farm, activists said they also saw kids being killed in front of their mothers, which is not illegal but was condemned by AJP as cruel.

Ms Palmer said their cameras captured “pithing” of unwanted kids – rods being plunged into their heads to end their lives after a captive bolt has stunned them.

Although the practice is carried out legally on UK farms, it is believed to be the first time it has been filmed in the UK, and the cameras caught kids “still kicking afterwards”.

In one clip, a worker who has just killed a kid is heard saying: “Don’t tell the vet we did it.”

Molly Vasanthakumar, a vet who watched the video clips from AJP, said the video of kids being killed broke her heart, adding: “I have multiple concerns here. Firstly, the death of so many lovely kids who are clearly considered to be of no financial value.

“Secondly, the fact that each kid is bolt-gunned next to the bodies of other kids. I feel it takes a certain level of cognitive dissonance to put any sentient being through that.

“And then finally the fact that not a single kid is checked after it has been killed.”

The clips also showed “an excessive number” of lame goats, she said, and that “the associated pain and discomfort are an obvious cause of concern”.

Ms Palmer said the findings revealed “a side to the goat milk industry that is hidden” from the public.

Pasture House Farm said in a statement: “We pride ourselves on the quality of our stock, the high health status of our herd, and in turn the welfare standards we have achieved and maintain.

“We continue to meet the requirements of all external inspections, announced or unannounced, and actively encourage site visits from all sectors, including government, trade, academia, veterinary or from a variety of groups and auditing bodies.

“We welcome the opportunity to have our farming practices challenged, via direct or indirect means, and though various claims and allegations have been made against our practices, none of what we have seen appears to breach the animal welfare standards to which we adhere.”

A Delamere Dairy spokeswoman said the company frequently visits Pasture House Farm, and in the past month, it passed an independent audit.

“The family that runs this farm has a wealth of knowledge and experience and uses this to maintain high herd health and protect their farm, livestock and livelihood,” she said.

“Undercover activity is not necessarily a bad thing and has sometimes helped to right some wrongs.”

But she said the footage apparently had been edited. “I appreciate some of this will be distressing to the general public. However, we do not believe that animal welfare codes have been breached.”

She added that any lame goats are put in the sick bay for treatment; before Covid, all male kids were reared for meat but the pandemic shrank the restaurant trade; euthanising conforms to Humane Slaughter Association regulations; tagging is a legal requirement that causes pain for just seconds; and disbudding is done under anaesthetic by a vet.

“The notion that the farm doesn’t comply with the law by checking animals at least twice a day is false. Workers are in the sheds on and off all day from 6am until the last checks around 9pm.

“We don’t recognise a farm worker ‘hitting and slapping’ goats. She is tending to the health and welfare of kids” that immediately run back to her. Fresh clean straw is put down every day, she said. “Bedded pens never look as clean in this light but seen in full daylight they would look and are perfectly clean.

“Delamere strives to work with the best in the industry and we remain very transparent as a business and our approach to sustainable farming.”

A spokesperson for the British Retail Consortium said: “Our members take their responsibilities to animal welfare very seriously and will investigate these claims. Swift action will be taken against any breaches to the high animal welfare standards our members uphold.”

When asked to respond, M&S and Asda both referred to the BRC statement.

Ocado and Morrisons did not respond to requests to comment. 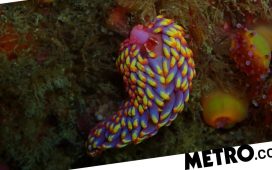 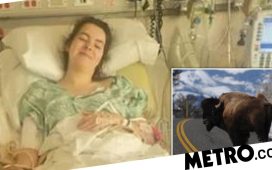 These baboons borrowed a third of their genes from their cousins