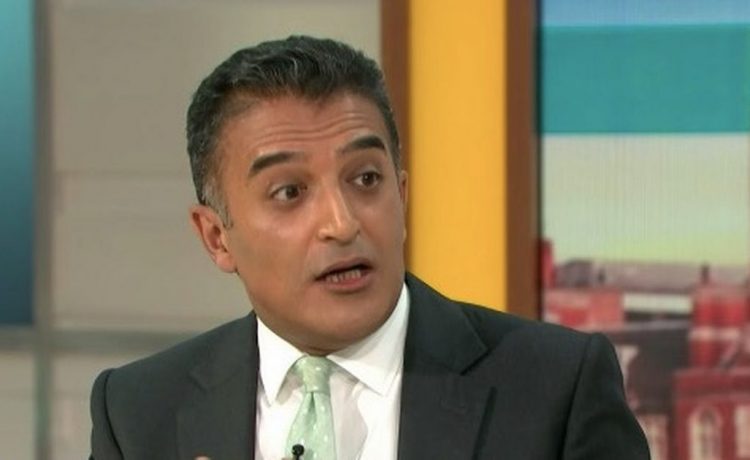 Piers, who quit GMB on March 9 of this year, was famed for his combative approach to interviewing, frequently shouting over guests to make his point.

Currie agreed with the claims and insisted the NHS should rely less on immigrant NHS workers, only for Adil to praise the hard work done by foreign doctors and nurses.

“I find it quite disgusting really, this is Britain,” he said, referring to the influx of immigrant doctors and nurses in the 60s, who helped to save the NHS from collapse.

Picking up on Currie’s use of the phrase “our own” to describe Brits, he wondered: “Was my father, a migrant, ‘our own’?

“Who do you actually mean by saying ‘our own’?”

The debate taking a fiery turn, Edwina then snapped at Adil, ordering him to “calm down” and comparing him to the outspoken ex-GMB star.

“Calm down, you’re turning into Piers Morgan. You can do better than that,” she quipped.

Adil refused to quieten down and replied: “I don’t care who I’m turning into. We’re talking about a really important subject.”

Dr Hilary Jones agreed with Adil and insisted the UK health system is “dependent” on overseas workers, and it should stay that way.

Watching from home, viewers complimented Adil’s handling of the debate, feeling he made his point articulately in the face of the “calm down” jibe.

“Haha. Edwina Currie: ‘your turning into Piers Morgan’…. Trying to deflect from the conversation. #AdilRay nicely putting Currie firmly in her place there. #gmb,” said one on Twitter.

A second agreed: “I’ll be honest I was sceptical when @adilray

replaced Piers Morgan on @GMB, but he is definitely one of the better presenters. Argues his points with real intelligence and calmness, rather than simply shouting. #goodmorningbritain #gmb.”

And a third penned: “You’re turning in to piers Morgan….I don’t care who I turn in to…..Mrs Currie taken down…#gmb.”

Good Morning Britain airs on weekdays at 6am on ITV.