Scientists have published the full genome sequence of the mysterious giant squid, which seems to hint at the creature’s high intelligence.

An international research team found that their genes look a lot like other animals – with a genome size not far behind that of humans.

The mysterious squid, Architeuthius dux, has eyes as big as dinner plates and tentacles that snatch prey from 10 yards away.

Its average length is around 33 feet – approximately the size of an average-sized school bus.

But these legendary creatures are notoriously elusive and sightings are rare, making them difficult to study.

Now an international team of researchers have fully mapped the genome of the species to answer key evolutionary questions. 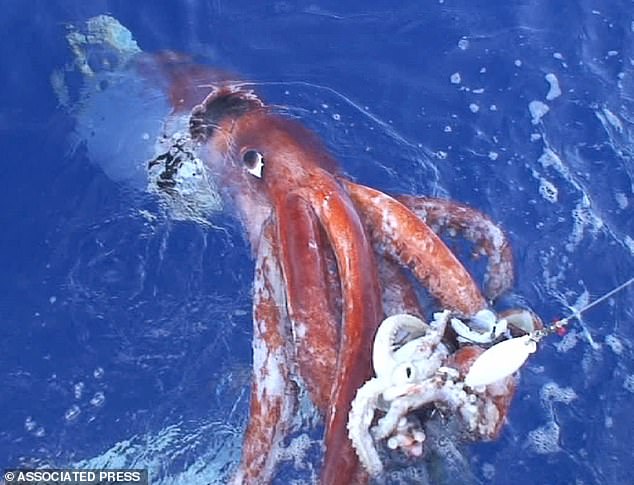 In this photo released by Tsunemi Kubodera at Japan’s National Science Museum, a giant squid attacking a bait squid is being pulled up by his research team off the Ogasawara Islands, south of Tokyo, in December 2006

These include how they acquired the largest brain of all the invertebrates, as well as sophisticated behaviours and agility, and the skill of instantaneous camouflage.

‘A genome is a first step for answering a lot of questions about the biology of these very weird animals,’ said Caroline Albertin of the Marine Biological Laboratory (MBL) in Massachusetts.

‘While cephalopods have many complex and elaborate features, they are thought to have evolved independently of the vertebrates.

‘By comparing their genomes we can ask, “Are cephalopods and vertebrates built the same way or are they built differently?”.’

Previously, Albertin led a team that sequenced the first genome of a cephalopod – the group that includes squid, octopus, cuttlefish, and nautilus.

They discovered the giant squid genome has an estimated 2.7 billion DNA base pairs – the connected chemical compounds on opposite sides of DNA strands.

This is about 90 per cent the size of the human genome – we have around 3 billion.

While genome size doesn’t necessarily equate to intelligence, it can hint at features such as cell division rate, body size, developmental rate and even extinction risk.

Albertin also identified more than 100 genes from the protocadherin family of proteins – typically not found in abundance in invertebrates – in the giant squid genome.

Protocadherins are thought to be important in wiring up a complicated brain correctly. 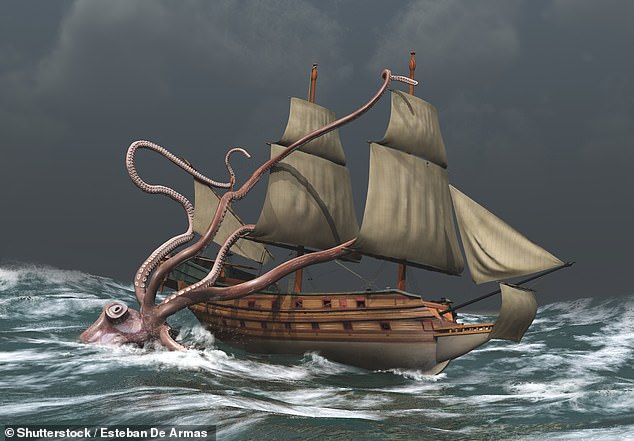 Artist’s impression of the kraken sea monster, which was likely inspired by the giant squid

The team were surprised to find more than 100 protocadherins in the octopus genome.

‘That seemed like a smoking gun to how you make a complicated brain,’ she said. ‘And we have found a similar expansion of protocadherins in the giant squid, as well.’

But how did the creature get so big? It’s a question that requires further probing of its genome, according to the team.

But they have ruled out one possible option: whole genome duplication – an evolution strategy adopted millions of years ago for species to increase their size.

The giant squid genome revealed only single copies of important developmental genes used in genome duplication – called Hox and Wnt – that are present in almost all animals.

The lack of these two developmental genes suggested to the team that the gigantic invertebrate didn’t use whole genome duplication to increase its size as it evolved, but something else. 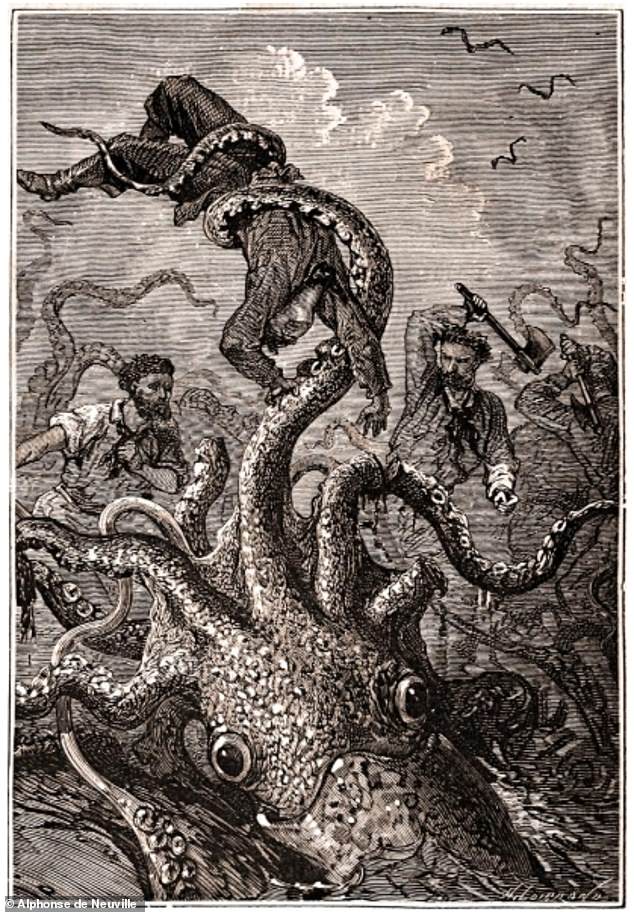 The giant squid has long been a subject of horror lore. In this original illustration from Jules Verne’s ‘20,000 Leagues Under the Sea,’ the squid grasps a helpless sailor

Albertin also analysed a gene family that has so far been unique to cephalopods, called reflectins, which encode a protein that’s involved in making iridescence – the stunning ability to change colour when viewed from different angles.

‘Colour is an important part of camouflage, so we are trying to understand what this gene family is doing and how it works,’ Albertin said.

Giant squid are rarely sighted and have never been caught and kept alive, meaning details of their biological make-up have remained a mystery.

‘Having this giant squid genome is an important node in helping us understand what makes a cephalopod a cephalopod,’ Albertin said

‘And it also can help us understand how new and novel genes arise in evolution and development.’

The giant squid of the Architeuthis genus was first described by researchers in 1857.

Despite having distribution spanning the whole of the ocean’s globe, except in the high Arctic and Antarctic waters, the creature is notoriously elusive, although it was captured in US waters for the first time last year.

The new study, led by a team at the University of Copenhagen in Denmark, has been published in the journal GigaScience.

WHAT IS THE GIANT SQUID?

Giant squid are thought to live all throughout the world’s oceans, though not so much in the tropical and polar areas, according to Smithsonian.

READ  Pi Day: Why some mathematicians refuse to celebrate 14 March and won't observe it

Until 2006, a giant squid had never been filmed alive, and much about what’s known of them is based on carcasses that have washed ashore.

The largest ever recorded, including the tentacles sits at a staggering 43 feet (13 meters), and scientists suspect the creatures may grow as large as 66 feet (20 meters) long.

Their eyes are the size of dinner plates, each at about 1 foot (30 centimeters) wide.

Earth's new mini-moon seen in full color, but experts questioning if the asteroid is space junk

Hedgehogs have not hibernated this winter because of mild weather

The Guardian view on the coronavirus outbreak: leadership is required | Editorial

‘Mystery object’ in orbit around Earth shown in new images